All of New Zealand is at Alert Level 1 for the first time in two months, and there are no active cases remaining in the community. Weekly employment data show that while job numbers have trended down since May, median weekly earnings have trended up. Household consumer confidence remains subdued while the preliminary read of October business confidence shows own activity expectations returning to positive territory for the first time since February. Dairy prices slipped somewhat over September, however recent auction results point to a strengthening outlook.

The unemployment rate in the United States continued to fall in September, but there are still close to 11 million fewer people employed than before the pandemic. Negotiations on additional fiscal support have been put on hold until after the election, which reinforces the expectation that the pace of the recovery will slow going into the December quarter. The Australian Federal budget revealed new fiscal measures worth 6.8% of GDP even though the outlook for the economy has improved since the July Update.

Two weeks have passed since the last COVID-19 case related to the Auckland August cluster was reported (Figure 1). All of New Zealand is now at Alert Level 1 for the first time in nearly two months. There are no active COVID-19 cases remaining in the community, with all 39 active cases in managed isolation at the border. The total number of tests conducted now exceeds 980,000. 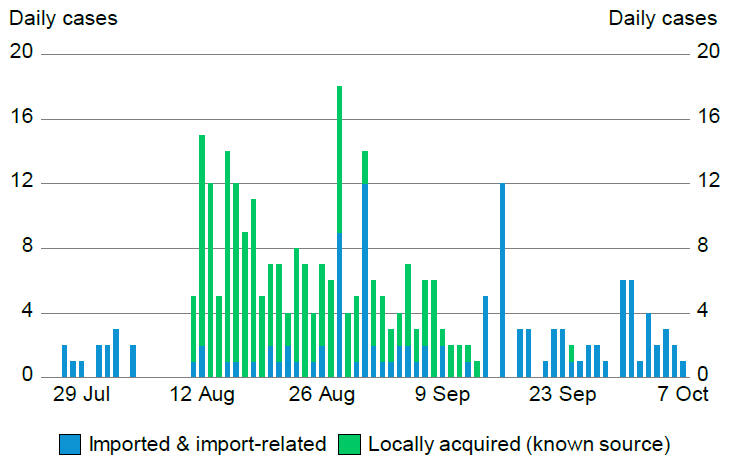 Experimental weekly employment data from Stats NZ show that while job numbers (compared to 2019) have been trending down since May, median weekly earnings have trended upward (Figure 2). 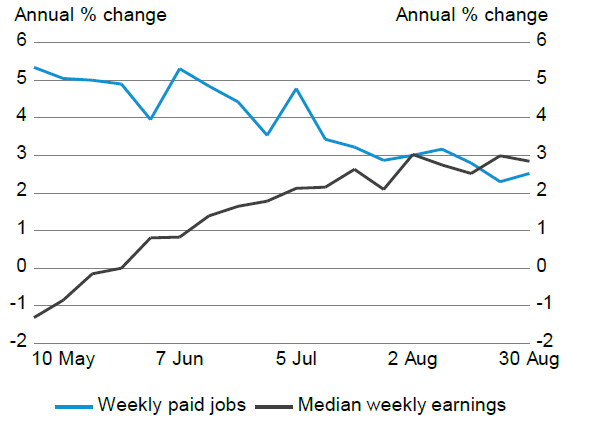 This may reflect a compositional change in the labour market rather than an increase in hourly earnings, as the jobs usually most at risk during a recession are those on relatively low wages and hours. When these jobs are lost, median earnings will increase even if individual wage rates remain unchanged. Growth in services and goods-producing jobs has trended down, however job numbers remain above last year’s levels (Figure 3). 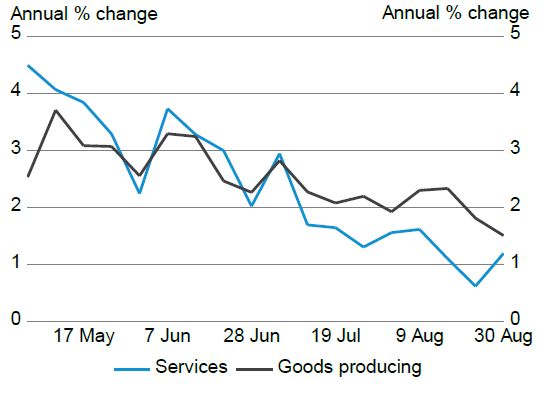 …as do income support recipients

In the week to 2 October, the number of people receiving the COVID-19 Income Relief Payment (CIRP) fell by 996 as Jobseeker Support rose by 727. Total income support numbers (Jobseeker and CIRP) fell slightly to 216,000. The ANZ-Roy Morgan Consumer Confidence Index remained at 100.0 in September, well below its historical average of about 120, and around the 2009 average. While confidence and spending have bounced back strongly as Alert Level restrictions have progressively eased, households' concerns about their economic future is still putting pressure on confidence, consistent with subdued spending behaviour going forward.

Horticulture prices rose 1.1%, driven by higher kiwifruit prices while apple prices eased. Forestry prices rose 1.7% and are now 2.0% higher than a year ago, but still well below early-2019 levels. Recent demand for logs has been strong, both domestically and from China, our main export market.

The meat and fibre index fell 0.4%, with beef prices down 1.5% and lamb prices up 0.6%. Dairy prices fell 1.3% as butter and whole milk powder prices eased. These falls were partly offset by higher prices for skim milk powder and cheese. 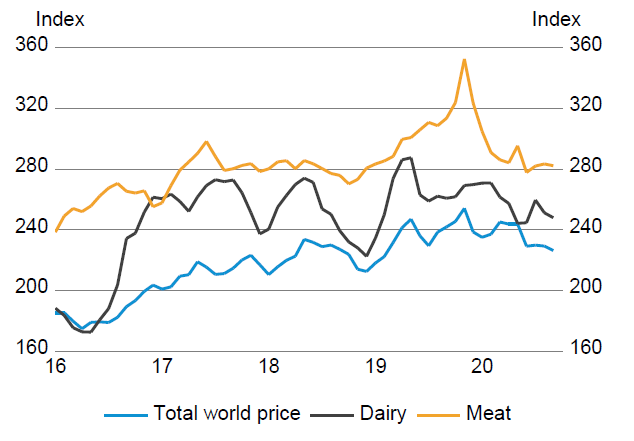 …but recovered in the latest auctions

In this week's GlobalDairyTrade auction, the index rose 2.2% in US dollar terms from the previous event (3.4% in New Zealand dollar terms) on increased volumes of product. This is the second increase following four consecutive declines. Prices have remained firm as New Zealand production reaches its seasonal peak, indicating that global dairy demand remains strong despite the impact of the pandemic.

The unemployment rate in the United States (US) fell from 8.4% to 7.9% in September, with the participation rate dropping again from 61.7% to 61.4% (Figure 7). Non-farm employment increased by 661,000, lower than market expectations for an 859,000 increase. The lower than expected employment growth was mostly due to a large fall in public sector employment. Overall, while temporary unemployment fell, there was an increase in permanent unemployment, and there are still close to 11 million fewer jobs than before the pandemic. Meanwhile, personal income among US households fell by 2.7% in August, while the growth in consumption slowed. This was mainly due to the expiration of additional unemployment benefits at the end of July. US President Trump indicated on Tuesday that negotiations on further fiscal stimulus measures have been put on hold until after the election. This announcement came just hours after Federal Reserve Chair Powell said that Congress should err on the side of providing too much fiscal support, warning that a conservative approach that results in a slower recovery could worsen existing inequalities in the economy.

The US Institute for Supply Management (ISM) services Purchasing Managers (PMI) index increased by 0.9 points (pts) in September to 57.8. Although this is still below July's peak of 58.1, it is well above the 20-year average of 54.3. This suggests that growth in the services sector is above-trend despite concerns that the pace of the recovery is slowing. Encouragingly, the employment sub-index rose back above 50 following six consecutive months of contraction.

Elsewhere, final reads on PMIs suggest that the pace of the recovery is slowing (Figure 8). The euro area final composite PMI for September was slightly better than the preliminary read thanks to a strong late rebound in the German services index and a better than expected performance in Italy. While the employment sub-index rose by 0.9, at 47.7 it is still in contractionary territory. The composite index slipped 1.4 pts from August. At its meeting on Tuesday, the Reserve Bank of Australia (RBA) decided to leave all its policy settings unchanged. The targets for the cash rate and the yield on 3-year Australian Government bonds therefore remain at 0.25%. The RBA indicated a willingness to keep the current accommodative monetary policy settings "as long as is required" and continues to consider what other monetary policy easing measures could be employed. Analysts expect the RBA will ease monetary policy further in the coming months.

In its delayed budget for 2020/21, the Australian Federal government unveiled new fiscal spending measures worth AUD98 billion (bn, 6.8% of GDP) to support the economic recovery in the aftermath of the COVID-19 pandemic. This brings total government support in response to COVID-19 to AUD507bn including balance sheet measures. New measures include the bringing forward of income tax cuts worth AUD17.8bn, a AUD10bn increase in infrastructure investment over 10 years, cash flow support through the tax system to businesses, and AUD4bn for a JobMaker Hiring Credit to incentivise businesses to employ 16-35 year olds.

Real GDP is forecast to contract by 1½% in 2020/21 on top of a 0.2% decline in 2019/20, before growing by 4¾% in 2021/22. In calendar year 2020, real GDP is forecast to fall by 3¾%, before growing by 4¼% in 2021. The easing of containment measures has resulted in a notable pick-up in economic activity, notwithstanding the renewed outbreak of the virus in Victoria, which has resulted in a slowdown in the pace of recovery in that state. The unemployment rate is now forecast to reach 8% of the labour force in the December quarter, compared to a previous forecast of 9¼%. 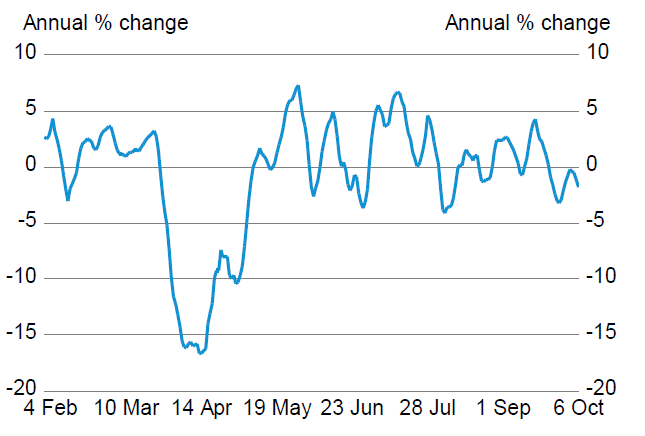 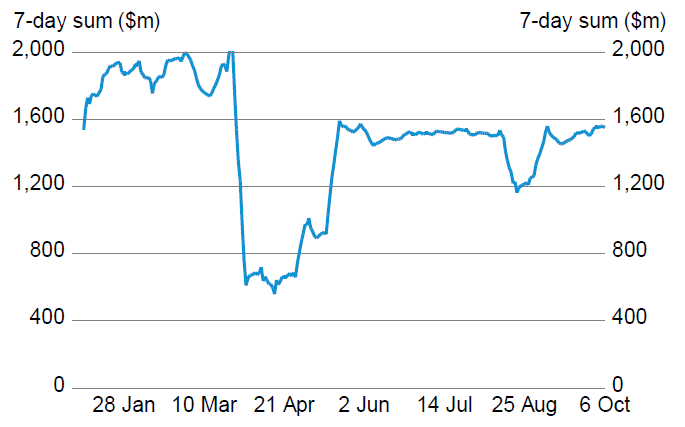 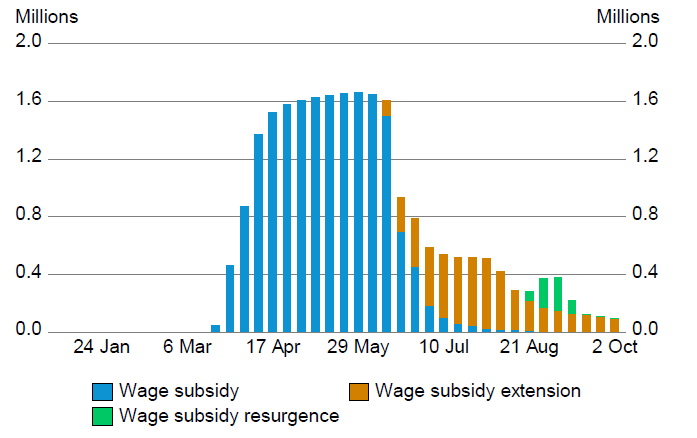 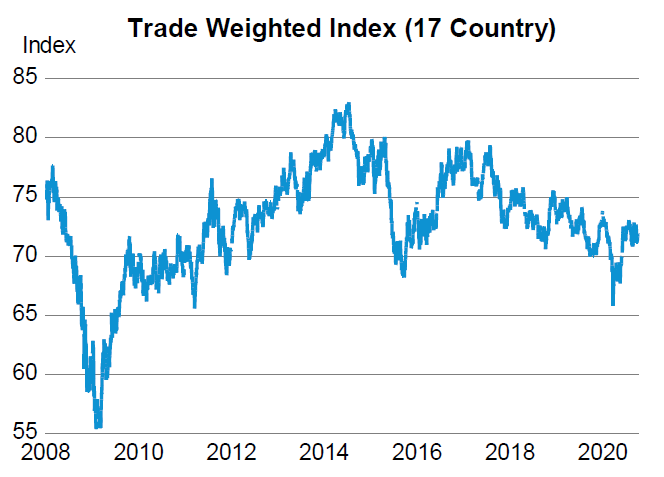