Auckland joined the rest of New Zealand at Alert Level 2 on 31 August, and Cabinet will review current restrictions on 4 September. High-frequency data suggest that the impacts of August Alert Level restrictions differed from previous impacts, though the implications for overall economic activity are unclear. Business and consumer confidence both weakened in August, reflecting the impacts of the higher alert levels. The merchandise terms of trade reached a record high in the June quarter as export prices rose, though spending by overseas visitors fell heavily.

Australia’s GDP fell 7.0% in the June quarter from the previous quarter, while India’s output fell by a quarter – the sharpest decline among major economies so far. Meanwhile, the September quarter recovery has continued, although Purchasing Manager’s Indices (PMI) have shown mixed results. The United States’ central bank confirmed it would be switching to a flexible average inflation targeting regime.

Auckland joins the rest of NZ at Alert Level 2

Auckland joined the rest of the country at Alert Level 2 on Monday 31 August, although with additional limits on gatherings. Cabinet will review the current Alert Level 2 restrictions on 4 September. There are 79 active COVID-19 cases which are linked to the Auckland August cluster and 36 active cases in managed isolation at the border. Over 285,000 tests have been taken since 12 August, bringing the total to around 790,000. High-frequency data suggest that the impact on Auckland activity from Alert Level 3 restrictions in August differed from the impact of Level 3 in April/May (Figure 2). Although card spending fell by more in August, the reductions in light and heavy traffic volumes were smaller. Meanwhile, the impact of August’s Alert Level 2 restrictions in the rest of NZ was similar to the impact of Level 2 in May/June (Figure 3). Although light traffic fell by less, the levels of heavy traffic and card spending were slightly lower. Consumer confidence fell 4 points to 100.2 in August in the ANZ-Roy Morgan Consumer Confidence Survey, well below its historical average of 120, and around the 2009 average (Figure 4). Consumer spending picked up strongly following the easing of alert levels earlier this year, but the high-frequency card data suggest the pace of growth has slowed.

The August ANZ Business Outlook Survey showed headline business confidence was little-changed from the preliminary read with a net 41.8% of businesses expecting conditions to deteriorate (Figure 4). Expectations of firm’s own activity was at -17.5%, down from -17.0% in the preliminary August read. Both indicators are weaker than in July. The August survey showed that Auckland businesses were more downbeat than elsewhere as a result of higher alert levels. Residential building consents fell 4.5% in July after a 0.7% rise in June. Consents bounced back strongly in May when restrictions were eased. The decline in consents in July was driven by weaker consent numbers for both standalone dwellings and multi-unit dwellings, which fell 3.9% and 5.3% respectively.

Annual consent issuance remains near the 45-year high recorded in February 2020 but we expect building consents to ease in coming months as income growth slows and unemployment rises.

The terms of trade rises to a record high…

The merchandise terms of trade rose by 2.5% to a record high in the June quarter as goods export prices rose 2.4% over the quarter, with gains seen in dairy, fruit and forestry, while goods import prices were broadly flat (Figure 5). Spending by overseas visitors and students fell by half in the June 2020 quarter compared to the same period in 2019 to $1.8 billion. Although New Zealand’s borders have been closed to international visitors and students since March, a large number of travellers were already in the country and may have remained for longer than they otherwise would have, preventing a larger fall.

…but export prices are easing

Meanwhile, the GlobalDairyTrade (GDT) index fell for the fourth consecutive time in this week’s auction (down 1.0%), as the pandemic continues to weigh on prices. Whole milk powder prices fell 2.0%, butter prices were down 1.2% and skim milk powder prices rose 1.8%. The GDT index is down about 7.5% from the same month a year ago.

We expect that relatively weak global demand will put downward pressure on export prices in the second half of the year. Combined with an expected recovery in imports, this is expected to widen the trade deficit.

Last week, the United States (US) Federal Reserve Bank (Fed) confirmed it would be switching to a flexible form of ‘average’ inflation targeting. This means that, rather than targeting consumer price inflation of around 2%, the Fed will instead aim to achieve an inflation rate that averages 2% over time. If inflation is therefore persistently below 2%, monetary policy will aim to achieve inflation in excess of 2% for some (unspecified) time. This policy change came at the conclusion of the Fed’s 1½-year review of its monetary policy framework. The other major change to the strategy was with regard to the labour market: the Fed will no longer tighten monetary policy pre-emptively if unemployment is at relatively low levels unless if it was resulting in a sustained increase in inflation to above 2%. The implications of these changes will become clearer following the Fed’s monetary policy committee meeting in mid-September.

Other central bank governors have echoed these sentiments. The Bank of England’s Andrew Bailey stressed that the bank is “not out of firepower by any means”, and the European Central Bank noted that it was ready to do more if needed.

Although the change in the Fed’s policy was in line with market expectations, it has led to a rise in inflation expectations and a further weakening in the US dollar. The S&P500 had its best August since 1984, but smaller companies (which better reflect the underlying health of the economy) have under-performed (Figure 6). Recent US economic data has generally been positive. The US Institute of Supply Management (ISM) manufacturing Purchasing Manager’s Index (PMI) for August rose 1.8 points to 56.0. While the new orders component is now at its highest level since 2004, the employment component remains in contractionary territory.

June quarter GDP fell by 7.0% compared to the previous quarter, the steepest fall since records began in 1959. Following the 0.3% GDP decline in the March quarter, this is Australia’s first technical recession since 1991. Household final consumption expenditure declined by 12.1%, with spending on services falling by 17.6% (Table 1). The household saving to income ratio rose from 6.0% to 19.8%, the highest rate since June 1974. Net exports made a 1.0 percentage point contribution to real GDP growth in the quarter.

The current account surplus rose to a record $17.7 billion in seasonally adjusted terms in the June quarter, compared to $9.0 billion in the March quarter. This was mostly due to the balance on goods and services rising from $19.1 billion to $23.9 billion, with imports falling by more than exports.

The Reserve Bank of Australia (RBA) decided to expand and extend its term funding facility after its policy decision meeting on Tuesday. The total amount available under the facility was increased to around $200 billion, and will be available until the end of June 2021. The targets for the cash rate and the yield on 3-year Australian government bonds were maintained at 25bps. The Bank stated that it will maintain accommodative policy settings for as long as necessary, and that it “continues to consider how further monetary measures could support the recovery”.

India’s June quarter GDP declined by an estimated 23.9% compared to a year earlier (and by 25.6% compared to the previous quarter), the steepest contraction reported so far in the quarter by a major economy, reflecting the severity of India’s lockdown. The hardest hit sectors were trade & transport services and manufacturing, which contracted by 47% and 39% compared to year-ago levels, respectively. There are concerns about the pace of the recovery, with the country continuing to record a large number of new COVID-19 infections on a daily basis, and some regions having remained in lockdowns during July and August.

…while the rest of Asia continues to recover

China’s official manufacturing PMI slipped marginally to 51.0 in August from 51.1 the previous month due to heavy flooding in the south of the country. The official services PMI increased by more than expected to 55.2 from 54.2 in July. Furthermore, the Caixin/IHS Markit manufacturing PMI for China rose from 52.8 in July to 53.1 in August, the highest level since January 2011. Firms reported their first increase in export sales in 2020 to date. While the employment index was in contractionary territory for the eighth consecutive month, the pace of the decline has moderated. 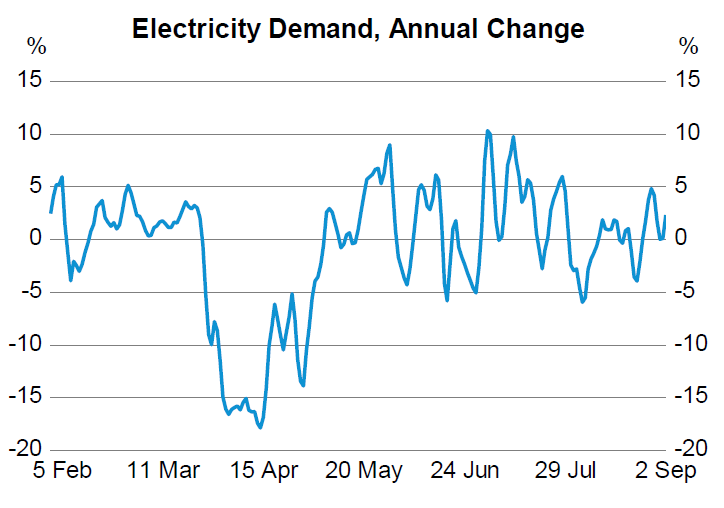 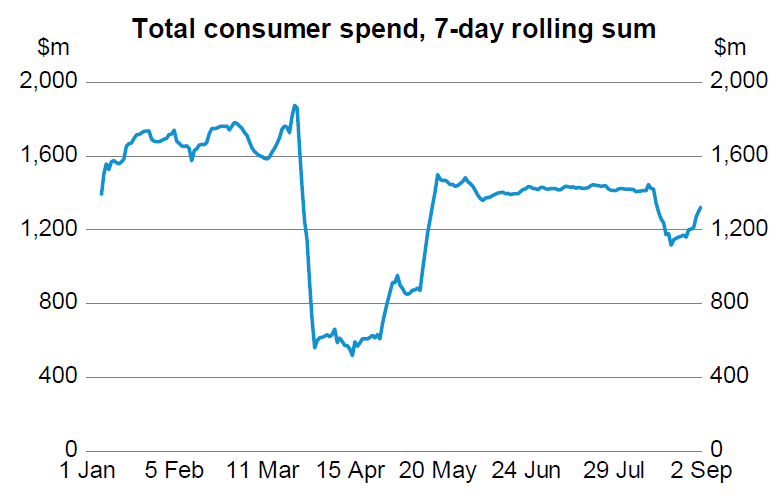 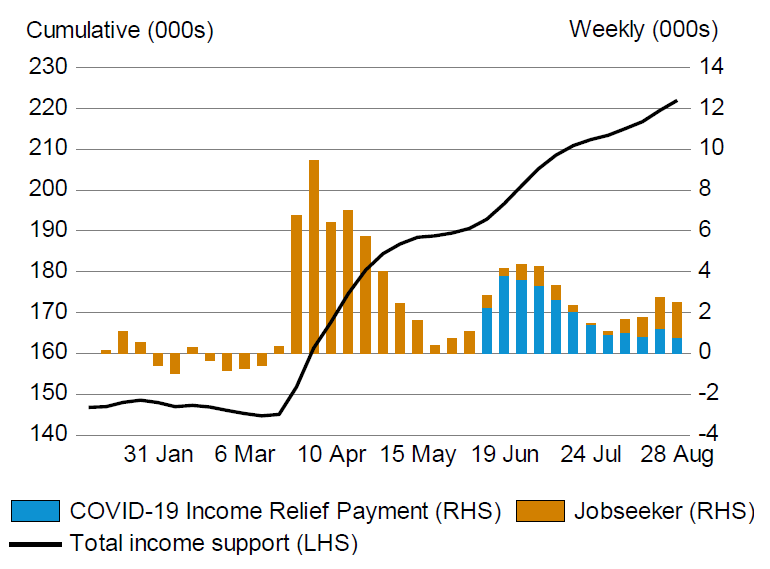 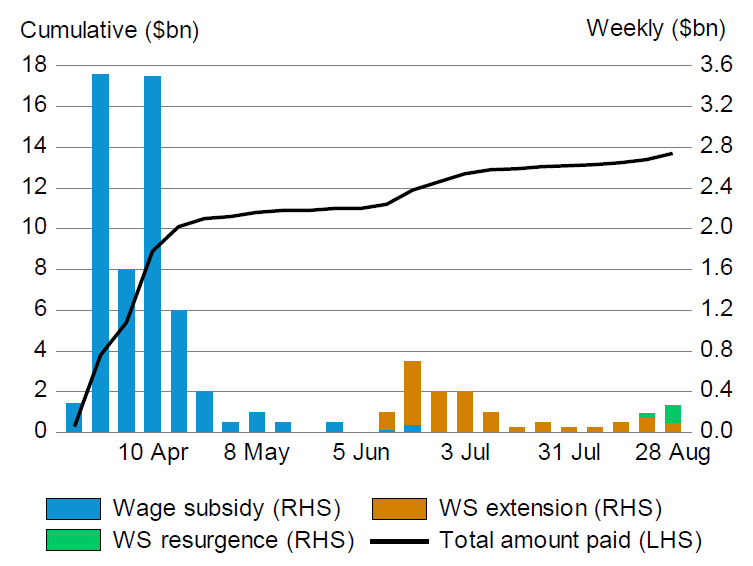