Retail spending appears resilient even as income support numbers continue to grow, though the rate of increase is slowing. New Zealand recorded its first quarterly trade surplus since 2014, due to a large fall in import values. Job numbers continued to recover in June but remained below pre-COVID levels. Bank customer lending data suggests that the outlook for consumers has improved, though the number of missed business loan payments remains high. New home consents were boosted by a record number of consents for townhouses, flats and units.

Globally, new confirmed cases of COVID-19 have continued to rise in a number of regions. While July flash PMIs suggest a recovery in economic activity is underway, employment is lagging and the United States (US) is under-performing. The US dollar has been on the back foot and the gold price reached a record-high. A new fiscal stimulus proposal was announced in the US, but is still to be approved in Congress. In Australia, there was a decline in consumer confidence, payroll jobs and inflation.

Still no cases of community transmission…

Ninety days have passed since the last case of COVID-19 was acquired locally from an unknown source. Legislation introduced to Parliament on Wednesday will mean that New Zealanders who enter the country temporarily or leave the country after new regulations come into force will face charges for managed isolation. There are now 24 active cases in the country, all of which were intercepted at the border. Total COVID-19 tests in New Zealand now exceed 460,000 (Figure 1). According to data from Paymark, retail card spending has remained above 2019 levels for the past two months (Figure 2). This has largely been driven by spending at supermarkets, liquor stores and pharmacies, which have been elevated even during the strictest Alert Levels in New Zealand. When excluding this type of spending, retail card spending dipped below 2019 levels in the week to 26 July, after holding steady in the three weeks prior. Total electronic card spending in that week was up 0.6% on the same time last year. 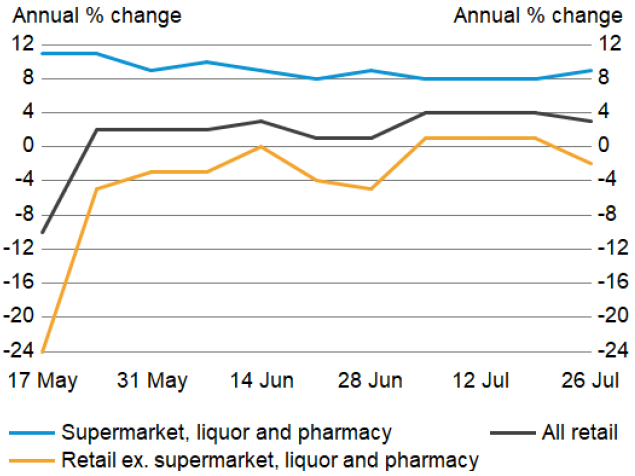 Electronic card transactions data collected by Stats NZ usually accounts for around 50% of private consumption, so the implications for total household spending are not yet clear. The release of the June quarter Retail Trade Survey on 24 August will provide a clearer picture of how resilient private consumption has been.

Around 20,000 people were receiving the COVID-19 Income Relief Payment (CIRP) as of 24 July, an increase of 1,400 on the previous week. The number of Jobseeker Support recipients increased only slightly, although 100 more recipients transferred onto the CIRP. The total number of people receiving income support (Jobseeker and CIRP) was 212,400 – up 1,500 on the week prior and 67,000 since 20 March. The weekly increase in total income support has slowed in each of the past four weeks.

Goods exports continued to hold up well in June, up 2.2% from the same month last year, supported by meat, dairy and logs. Goods imports rose 0.2% year on year owing to the arrival of a new Navy ship. Excluding the ship, goods imports were down 8%.

In the June quarter, export values were 5.8% lower than in March, in line with our Budget forecasts. Imports were 16% lower in the quarter, higher than expected, partly due to timing in accounting for the new Navy vessel. The trade balance for the June quarter was a surplus of $1.4 billion, the first quarterly surplus since the March 2014 quarter.

For the June 2020 year, goods exports rose 1.4%, while imports fell 4.6%, resulting in a deficit for the year ending June of $1.2 billion (Figure 3). This deficit would have been even smaller (around $800 million) were it not for the Navy vessel.

We expect the annual deficit to widen in the second half of the year as imports recover and lower global demand dampens export earnings. Job numbers have recovered somewhat over May and June, following a substantial fall in April, but remain below pre-COVID levels. The most significantly impacted industries include accommodation and food services, and arts and recreation services. Gross earnings also dropped, down 0.9% in the quarter. Note that these statistics include wages paid by employers receiving the COVID-19 wage subsidy scheme.

New dwelling consents rose 0.5% in June to be up 20.4% compared to June 2019, boosted by a record number of new townhouses, flats and units consented. However, these increases come after a very weak period due to lockdown measures. Processing delays relating to lockdown measures mean that some of this month’s numbers may still reflect consents submitted weeks or months ago, so it is unclear how much of the bounce back is attributable to timing. We expect that heightened uncertainty levels and reduced demand from a combination of lower incomes and net migration will see consent issuance ease over the year ahead.

The outlook for households has improved…

The Reserve Bank’s new Bank Customer Lending metrics release shows the impact of COVID-19 on households, businesses and the banking sector.  The release shows that the number of new mortgage deferral requests peaked in the week to 10 April. During that week there were over 28,000 new bank mortgage deferrals for loans worth $7.9 billion (Figure 4). In the week to 17 July, the number of new deferral requests dropped to 400. Missed payments on consumer loans have been trending down since early May, after peaking at almost 100,000 in the week to 27 March. Current bank exposure to consumer missed payments for the week ended 17 July is $427 million. However, missed business loan payments are increasing, with almost 18,000 businesses missing payments on loans worth $1.7 billion in the week to 17 July. …and business confidence is still weak

The final read of the July ANZ Business Outlook Survey slipped slightly from its preliminary read, and remains in contractionary territory, although it still amounted to an improvement on June’s result.

Annual growth in the M2 money supply in the United States (US) surged to 22.9% in June 2020, the highest rate in at least 60 years (Figure 5). This has spurred fears that current expansionary monetary and fiscal policies in the US may eventually result in a spike in consumer price inflation. Goldman Sachs warned this week that the US dollar’s status as the world’s reserve currency may be at risk due to rising debt levels and political uncertainty. The price of gold reached a record-high on Tuesday of US$1,950 per fine ounce. Its previous high, reached during the global financial crisis, was US$1,920. The demand for gold tends to rise in times of uncertainty while it also acts as a hedge against inflation. Flash Purchasing Managers Indexes (PMIs) released at the end of last week confirmed that both the manufacturing and services industries have returned to growth across the globe in the third quarter (Figure 6). The services PMI in the euro area was much stronger than expected. Overall, the survey results seem to suggest that we may indeed see a V-shaped recovery following the sharp contraction in the second quarter. However, there are also some reasons to be cautious. The employment sub-index has underperformed in most regions, which raises concerns about the sustainability of the demand recovery, especially once fiscal income support is unwound. Additionally, there is the risk that further waves of COVID-19 infections will continue to be a drag on business and consumer confidence.

…but varied across regions

In the US, flash PMIs for July showed more modest improvements than were expected, and the services sector remained in contractionary territory. Many companies, in particular those in consumer-facing areas of the service sector, indicated that a fall in sales was due to the reintroduction of lockdown measures. There was little market reaction though, partly because more weight tends to be put on the ISM surveys in the US. Nonetheless, the relatively weak PMI figures for July are in line with other high-frequency indicators, including weekly jobless claims, which suggest that the recovery in the US is stalling amidst rising COVID-19 cases in a number of states. The recovery in consumer confidence appears to be stalling as a result, with the Conference Board’s index for July falling by more than expected, and with states hit hard by COVID-19 faring worse. The expectations component declined by almost 15 pts to bring it only a few points above the March level. 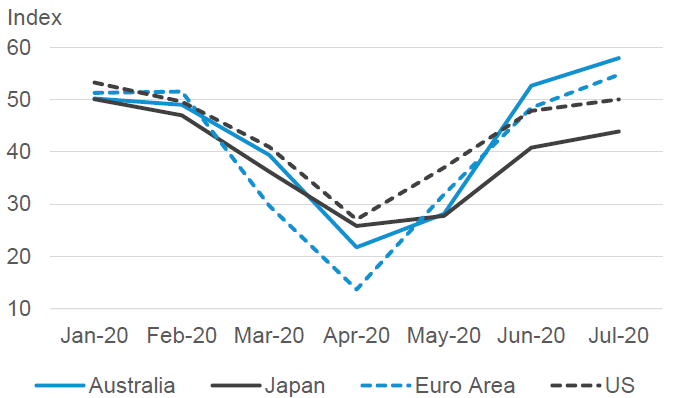 In Australia, business activity as measured by the PMI increased at the fastest pace since April 2017, driven by a strong recovery in the services sector back into expansionary territory. Total new orders rose despite falling exports, but worryingly the employment index decreased for the sixth consecutive month – a common theme across markets.

New confirmed cases of COVID-19 in Victoria reached a record-high 532 on Monday (Figure 7), nearly halfway through its strict six-week lockdown. Total payroll jobs declined by 1.1% in Australia between mid-June and mid-July, with Victoria seeing a sharper decline of 2.2%. Compared to mid-March, payroll jobs are down 5.6% nationally and 7.3% in Victoria, the hardest-hit state. Total wages have continued to decline, and are down 4.8% at a national level compared to mid-March. There was a further deterioration in consumer confidence as measured by the ANZ-Roy Morgan index, which declined for the fifth consecutive week to its lowest level since April, and is now below the global financial crisis trough. In a separate survey by the Australian Bureau of Statistics, 9% of respondents said they do not believe that their pre-pandemic lives will ever return.

The consumers price index (CPI) declined by 1.9% in the June quarter compared to March, mainly due to a 95% decline in childcare costs (reflecting government support during the pandemic) and sharp declines for fuel, rent, and education. This was the largest quarterly decline in the CPI in the 72-year history of the series. Annual inflation fell into negative territory (-0.3%) for only the third time since 1949 (the other times were in 1962 and 1997-98). With the government’s free childcare policy having ended on 12 July, the September quarter is likely to show a reversal in the June quarter CPI decline, and the true underlying price trend in the economy may only become clear in the December quarter.

Republican senators announced another COVID-19 relief bill, this time worth $1 trillion, just days before extended unemployment benefits were due to expire. The bill proposes to reduce the current Federal unemployment benefit supplement from $600 per week to $400, and includes another one-off payment of $1,200 to households. At the time of writing, negotiations between Republicans and Democrats were ongoing; in the absence of an agreement, supplementary unemployment benefits will expire on Friday, which could put further brakes on the recovery.

Meanwhile, the Federal Open Market Committee (FOMC) statement was in line with market expectations and had little impact on markets. The Federal Reserve committed to continue supporting the economy. Friday’s release of US GDP data will provide more concrete evidence of the severity of the current downturn.

…but US dollar on back foot amid rising infections

Global confirmed cases of COVID-19 have surpassed 16 million and a number of regions are experiencing renewed waves of infection, which raises the prospect of restrictions on activity being tightened once again. China recorded its biggest daily rise in cases since April, new cases in Spain have resurged, and the first local transmission of the virus in months was detected in Vietnam. Meanwhile, the virus rages on in the US, Brazil, Argentina, India, and South Africa. These worrying trends have, along with worsening US-China political tensions and uncertainty about when a new US fiscal policy deal will be reached, put downward pressure on the US dollar.

The euro currency has continued its strong performance since last week on optimism about the €750 billion EU Recovery Fund. It has risen to strongest level against the US dollar since September 2018, while on a trade-weighted basis it is at its highest level since 2014. Short positions on the US dollar are at their highest level in two years, which means that more weakness could be in store for the greenback. 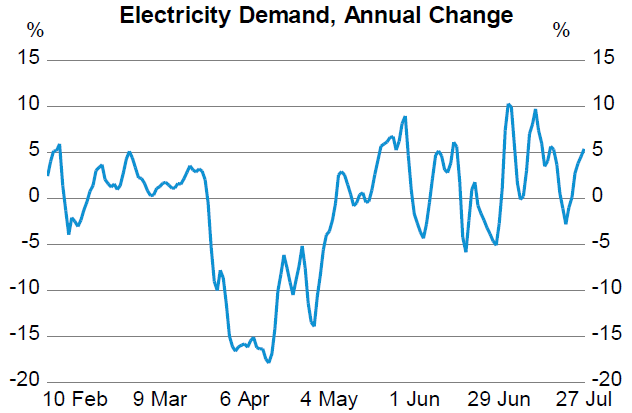 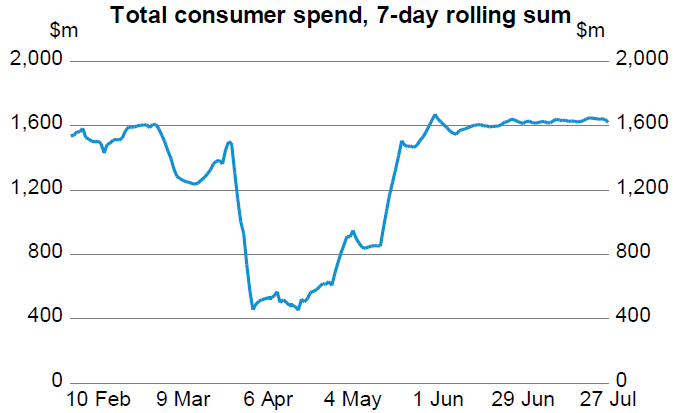