No new COVID-19 cases have been reported in the community, although cases continue to be recorded in Managed Isolation and Quarantine facilities. Inflation came in slightly weaker than expected in the September quarter, while the annual trade surplus continued to grow. Jobs numbers increased in the September month (supported by hiring of voting support workers) and the improvement in business confidence seen in the October preliminary ANZ Business Outlook was confirmed in the final results.

Internationally, September quarter GDP data rebounded substantially in the US, South Korea and Singapore, but remained below pre-pandemic levels. Meanwhile, surging new COVID-19 cases across Europe and the US and the imposition of fresh restrictions on activity in some states and countries is likely to slow, or even reverse, the pace of the recovery.

No cases of community transmission this week

There have been no further cases of community transmission after a port worker and two workplace contacts tested positive for COVID-19 last week (Figure 1). More than 20,000 community tests have been conducted in Auckland since the new community case was reported on 18 October. 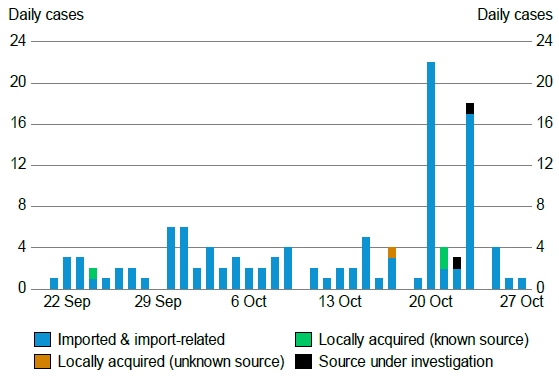 Mobility reports from Google suggest that people movements around NZ have mostly returned to levels seen in January (Figure 2). In the week to 23 October, movements at workplaces, grocery and retail stores, which fell during higher Alert Levels, had recovered to their January 2020 average. Movements in residential areas, which increased by 30% during Alert Level 4, were only slightly above the January average. The locations where mobility remained low were parks, possibly due to seasonal trends and transit stations, which reflects the low public transport usage seen in other data. In the week to 23 October, the number of COVID‑19 Income Relief Payment (CIRP) recipients fell by 1,784 as Jobseeker Support fell by 395, bringing the total number of recipients to 212,500. Data from the Ministry of Social Development suggest that most people whose CIRP payments have ended are not transferring onto Jobseeker Support (Figure 3), likely due to stricter eligibility requirements for Jobseeker Support. 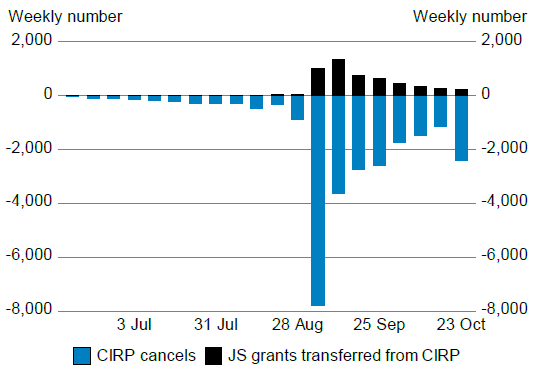 Annual CPI inflation eased to 1.4% in the September quarter, from 1.5% in the June quarter, weaker than most market expectations but broadly in line with our latest forecasts. Quarterly inflation was 0.7%, driven by broad-based increases in both the tradables and non-tradables groups. Inflationary pressures are likely to continue to ease in coming months as the effects of the pandemic flow through the economy. Combined with continuing border restrictions and weaker population growth, domestic demand is likely to remain lower than a year ago, limiting the rate at which prices can increase.

In the three months ended September, seasonally adjusted export values were 0.7% higher than in the previous three-month period, and import values were 3.3% higher. One-off exports of aircraft into long-term storage in August accounted for much of the quarterly increase in seasonally adjusted export values. Notable movements among the major export commodities in the quarter included: dairy exports down 16.1% ($681 million) driven by lower prices, while log and meat exports rose 20.8% ($207 million) and 4.8% ($92 million) respectively, as higher volumes more than offset lower prices for both commodities.

On the import side, most import types rose in the quarter as they recovered from pandemic induced disruption in the prior quarter, although imports of crude oil remained at low levels. Imports of machinery and plant, and passenger motor cars led the recovery, the former returned to a level that is line with the 3-year average, but the latter was down about 30% on the 3-year average.

Filled job numbers rose by 7,266 to 2.2 million in the month of September, following a similar rise in August. The increase for September is mostly driven by an increase in filled jobs in public administration and safety and is partly related to hiring for voting support workers. Stats NZ calculates filled jobs by averaging weekly jobs paid throughout the month, based on tax data.

In the final read of the ANZ Business Outlook survey for October, business confidence and activity indicators confirmed their improvement. Business confidence rose 13 points to a net 16% of firms expecting conditions to deteriorate, while own activity lifted 10 points to a net 5% expecting an improvement in their own activity. Goods producing sectors continue to be more optimistic than other sectors. Investment intentions remain subdued but employment intentions lifted further, up 9 points to a net 3% of firms intending to reduce employment. 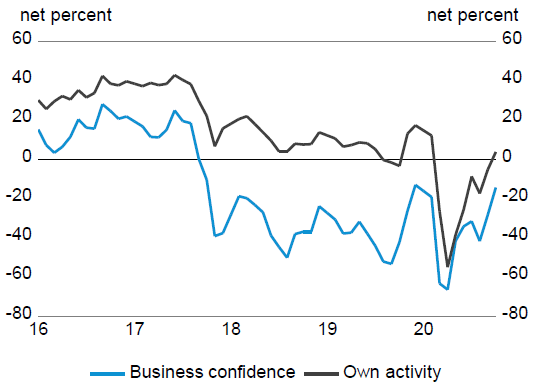 Internationally, reports on the scale of the rebound in September quarter GDP (Q3 GDP) continue to flow in. However, surging new COVID-19 cases across Europe and the US and the imposition of fresh restrictions on activity in some states and countries is likely to slow, or even reverse, the recovery that has been underway since mid-year.

In the US, Q3 GDP was 7.4% (33.1% annualised) higher than in the previous quarter, which recorded a 9.0% decline, but 2.9% lower than the same quarter a year ago, and 3.5% below pre-pandemic levels (Figure 6). Private consumption led the recovery, supported by government stimulus. Analysts expect December quarter GDP growth of about 0.7% as private consumption growth slows, with rising COVID-19 cases and the possibility of added restriction key downside risks. 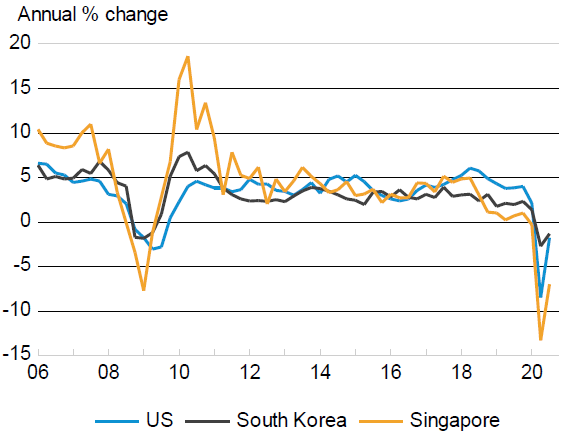 In South Korea, Q3 GDP rose 1.9% after falling 4.4% over the first six months of the year, to be 1.3% below year ago levels (Figure 6). Exports led the recovery, up 15.6% in the quarter, while private consumption dipped as a rise in COVID infections dragged on spending. Looking forward, the resurgence of infections among key trading partners is likely to moderate export growth.

In Singapore, Q3 GDP rose 7.9%, following a contraction of 13.2% in the June quarter, to be 7.0% lower than the same quarter a year ago (Figure 6). The services sector continues to struggle, particularly travel and consumer-facing services.

…but may not be sustained

In the euro area, ‘flash’ or early releases of October’s Purchasing Manager’s Indices (PMIs), echoed other signals of slowing growth. The composite services and manufacturing PMI slid into contractionary territory, down 0.6 points to 49.4, driven by weakness in the services component. Some analysts view the PMIs as confirmation that the euro area recovery has stalled. Analysts expect the Q3 GDP report, due overnight New Zealand time, to show growth of about 11% in the quarter.

In Australia, consumer prices were 1.6% higher in the September quarter than in the previous quarter, driven by a rebound in childcare prices, which the Federal Government had temporarily made free in the June quarter. This partly reversed the previous quarter’s 1.9% fall and, compared to the same quarter last year, prices were up 0.7%. Looking through the volatility, trimmed mean and weighted median measures of core inflation were stable at  1.2% and 1.3% respectively, well below the central bank’s 2-3% target band (Figure 7). 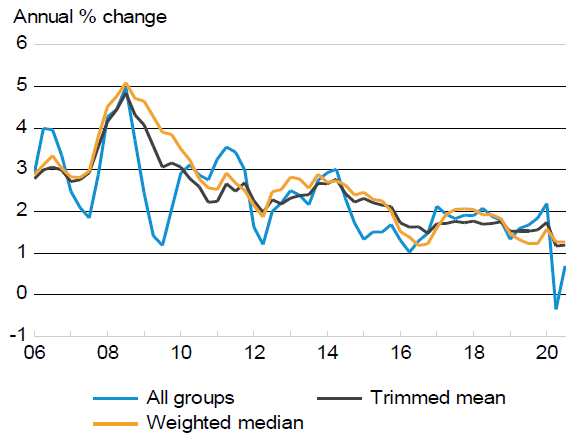 Meanwhile, Victorian Premier Andrews confirmed an easing of Melbourne’s activity restrictions from midnight Tuesday 27 October. Travel restrictions within the state have also been removed. Further easing is flagged for Sunday. The recovery in Victoria will likely provide a boost to Australian growth in the December quarter. 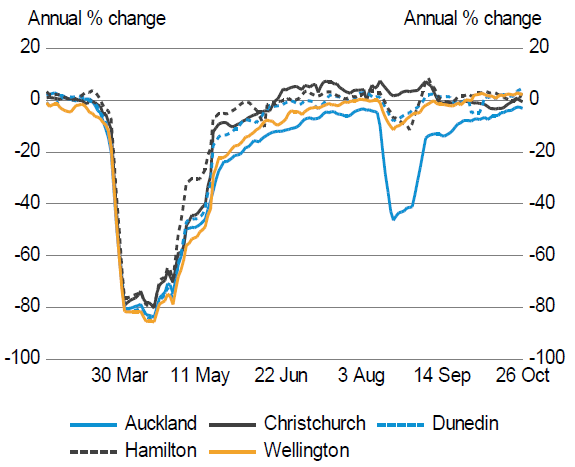 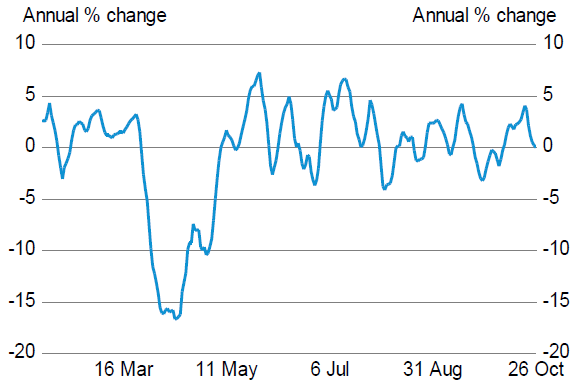 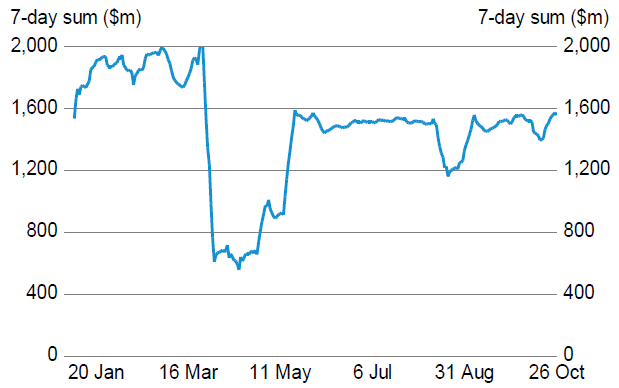 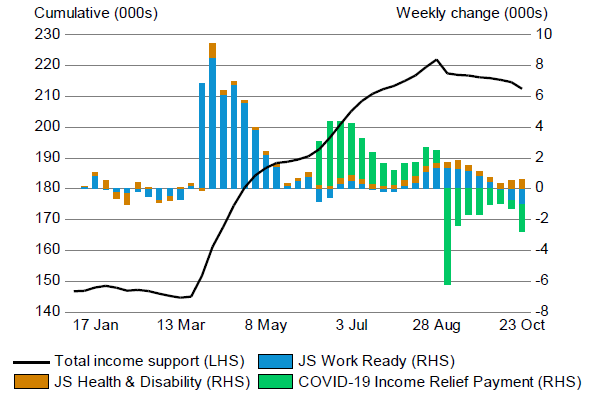 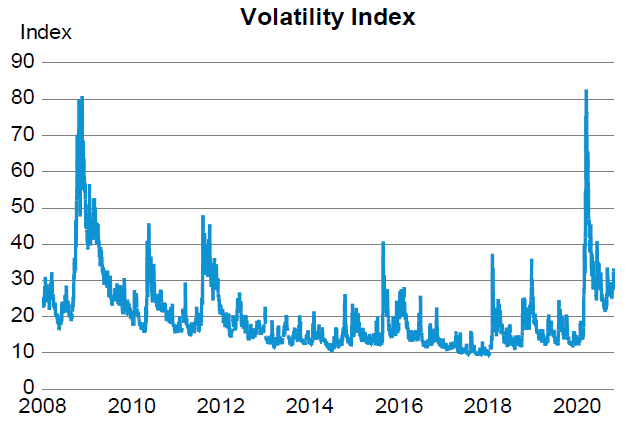 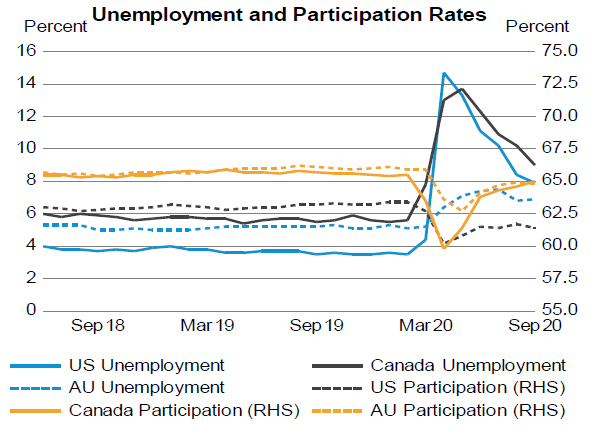 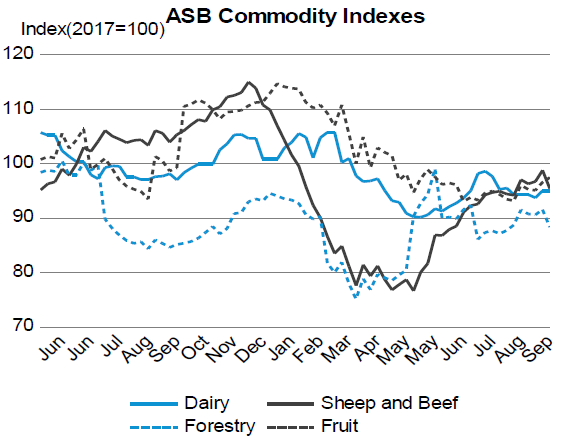