Auckland will join the rest of New Zealand at Alert Level 2 on 31 August, where the country will remain for at least another week.High-frequency data continue to show a sharp decrease in Auckland activity, while activity in the rest of New Zealand has remained close to normal levels. Retail sales experienced their biggest quarterly drop on record, while median incomes fell for the first time. The annual trade deficit narrowed further, as imports fell sharply and exports generally held up.

On balance, positive economic data from the United States (US) has continued, while the pace of the recovery has stalled in Europe. In Australia, the services sector returned to contractionary territory in August due to renewed activity restrictions in Victoria. US and Chinese officials reconfirmed their commitment to the Phase One trade deal, while there has been little progress on a trade deal between the European Union and the United Kingdom.

Auckland will move to Alert Level 2 on Monday 31 August, where it will remain (along with the rest of New Zealand) for at least another week. There are 114 active COVID-19 cases which are linked to the Auckland August cluster and 11 active cases in managed isolation at the border. Over 200,000 tests have been taken since 12 August, bringing the total to over 700,000. 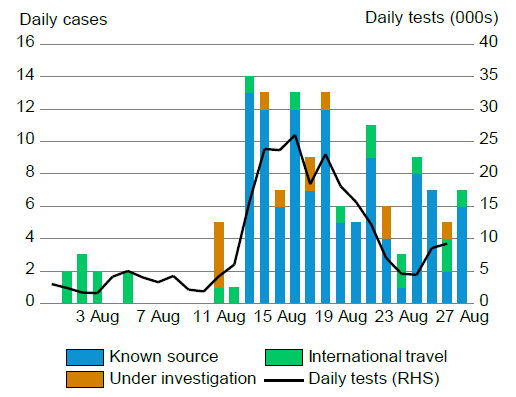 High-frequency data show a sharp decrease in Auckland activity (Figure 2). Card spending was 43% below the January/February average on 24 August, while light and heavy traffic volumes were 43% and 11% below 2019 levels, respectively. …as the rest of the country holds up

Meanwhile, activity in the rest of NZ has remained close to normal levels (Figure 3). Card spending was 11% below the January/February average on 24 August, while light and heavy traffic volumes were 7% and 3% below 2019 levels, respectively. The June 2020 quarter Retail Trade Survey showed that retail sales volumes fell by 14.6% from their March quarter level, the biggest quarterly drop on record. This follows a 1.2% fall in the March quarter. Most retail industries experienced a decline in sales volumes, with the biggest falls recorded in food and beverage services (down 38%), motor vehicles and parts (down 15%) and fuel (down 24%). The only industry not to experience a fall in volumes was non-store and commission-based retailing (online sales).

Retail sales volumes are a strong indicator of real private consumption spending (Figure 4). The fall in retail sales is consistent with our expectation of a large fall in private consumption in the June quarter as most businesses were unable to operate during Alert Level 4. However, the fall in sales activity was not as steep as feared in the Budget Update. We expect a strong rebound in the September quarter, driven by a period of pent-up demand. A number of high-frequency indicators support this view. There is, however, a risk that rising unemployment, lower household incomes and continued uncertainty will slow the recovery. Moreover, the absence of international visitors means that retail sales are likely to remain below previous levels for some time. …and incomes fall for the first time…

Median weekly incomes fell 7.6% in the June 2020 quarter compared to June 2019 in the wake of COVID-19, according to Stats NZ. This is the first fall since records began in 1998. Median incomes are now $652 a week. The measure captures income from wages and salaries, government transfers (such as New Zealand Superannuation and Jobseeker Support), and self-employment. People away from jobs without pay due to the pandemic and more people receiving government transfers contributed to the fall in income. Median self-employed incomes fell 12.5%, partly owing to fewer high-end earners. Median wage and salary earnings rose 4.3%, mainly because many lower income workers reported no earnings.

The narrowing trend seen over the last few months has continued into July. Imports have declined notably while exports have held up reasonably well. Imports of goods fell by $343m (‑7.3%) on a seasonally adjusted basis in July compared to the previous month (when a large navy ship was purchased), and were 18.2% below the July 2019 level. For the first time since August 1986, New Zealand did not import any crude oil in July. There were also lower imports of capital goods and passenger cars. Exports of goods fell by $84m (‑1.7%) in July compared to June, but were roughly on par with July 2019. Dairy exports fell by $184m (‑13.9%) due to lower quantities and prices. Meat exports declined by $22m (‑3.4%), and forestry by $19m (-4.2%), driven by lower prices. Exports of fruit and wine remained strong, rising by $44m (15.6%), and $13m (8.0%), respectively. The monthly trade surplus increased to $578m from $319m in June.

July's annual trade deficit ($115m) is the smallest since the 12 months ending October 2014 (Figure 5). However, we expect to see some export weakness in the second half of the year due to weak global demand. Combined with an expected recovery in goods imports, this is expected to widen the merchandise trade deficit.

Strong growth momentum in US…

The positive flow of economic data from the United States (US) has continued over the past week. The composite flash Performance of Manufacturing Index (PMI) for August came in at 54.7 (Figure 6), compared to the previous month's 50.3 (a reading over 50 represents an improvement from the previous month), a promising sign for the strength of the September quarter recovery in output. The services PMI increased from 50.0 to 54.8, its highest level since March 2019. This was supported by a solid increase in sales indicators. The job creation indicators have also accelerated, resulting in the first reported rise in employment among manufacturers since February. 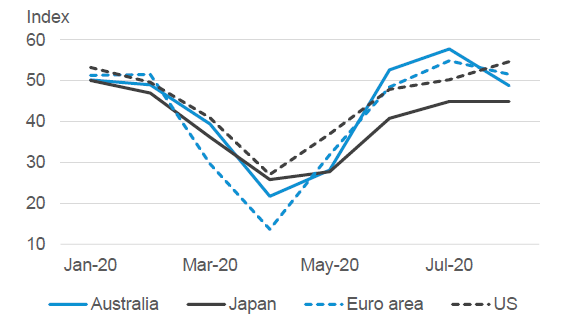 In other data, sales of both new and existing homes increased to their highest level since 2006, supported by low mortgage rates. Positive economic data along with a continued decline in the 7-day rolling average new COVID-19 cases and some welcome news on possible treatment options for the virus have supported equity prices in the US, with the S&P500 touching fresh record highs. Market enthusiasm was dampened by disappointing US consumer confidence data for August, which fell by 6.9 pts to 84.8 versus expectations for an increase. This brought the index to its lowest point during the pandemic period so far, reflecting continued weakness in the labour market.

…but pace has stalled in Europe…

In contrast, flash PMIs for the euro area indicate that the pace of recovery slowed in August. The composite index declined from 54.9 to 51.6 (Figure 6) due to weakness in services industries. This was partially offset by the continued recovery in manufacturing sentiment, which grew at its fastest pace since April 2018. However, the employment component was in contractionary territory for the sixth consecutive month. PMIs in the two largest economies, Germany and France, remained in expansionary territory, but output declined in the rest of the region. The euro area's recovery is being undermined by increases in COVID-19 infections, which have coincided with renewed restrictions, including on cross-border travel affecting services sectors in particular.

In Germany, the contraction in second quarter GDP was revised smaller from 10.1% to 9.7% compared to the first quarter. However, it remains the steepest decline in output since the beginning of the series in 1970. Consumer spending declined by 10.9%, investment by 19.6% and exports by 20.3%. Meanwhile, German business sentiment as measured by the Ifo rose for the fourth consecutive month in August to 92.6, beating market expectations.

Most OECD countries have now released figures for the June quarter GDP (Table 1), with the size of the contractions ranging from 7.8% (Japan) to 20.4% (the United Kingdom). The extent of the downturn in our trading partners has been sharper than we had expected at the Budget Update.

…and renewed downturn in Australia

The Australian economy appeared to have returned to contractionary territory in August, with the composite flash PMI falling from 57.8 to 48.8 (Figure 6). This coincided with renewed restrictions on mobility and activity being placed on Victoria amid rising COVID-19 infections. The downturn in activity was due to a renewed contraction in the services PMI, while the manufacturing PMI continued to rise. The survey also reported that firms remain confident about the recovery from the downturn over the next 12 months, but that they have lingering concerns about the longer-term impacts the pandemic may have on output levels, and employment declined at the quickest pace since May. Weekly payroll jobs declined by a further 0.3% in the week ending 8 August, bringing the monthly change to -1%. Meanwhile, consumers are more upbeat, with the first weekly increase in the ANZ-Roy Morgan consumer confidence index in more than two months (Figure 7). Confidence levels in Melbourne rose the most, but remain the lowest among the major capital cities. 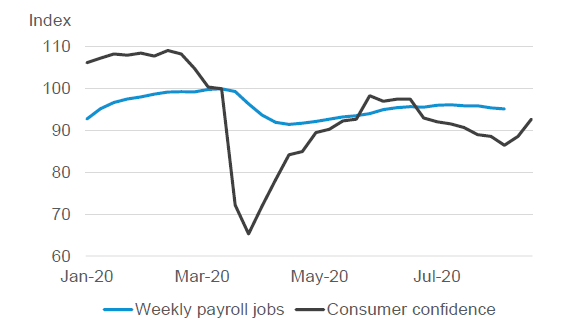 No progress with UK-EU trade talks…

The European Union's (EU) chief trade negotiator, Michel Barnier, has said that a post-Brexit trade deal between the EU and the United Kingdom (UK) seems unlikely at this stage. Due to key disagreements regarding government subsidies and the fisheries sector, it will be challenging to reach the EU's goal of securing a deal by mid-October so that it can be approved by the European Parliament before the post-Brexit transition period expires at the end of this year. If a deal is not secured by then, the UK and the EU would have to trade on World Trade Organisation (WTO) terms - a so-called ‘hard' Brexit.

…but US and China committed to Phase One

Chinese and US officials reiterated this week their commitment to the Phase One trade agreement that was signed in January. This came after an official six-month review of the trade deal. Both sides expressed confidence that progress is being made. 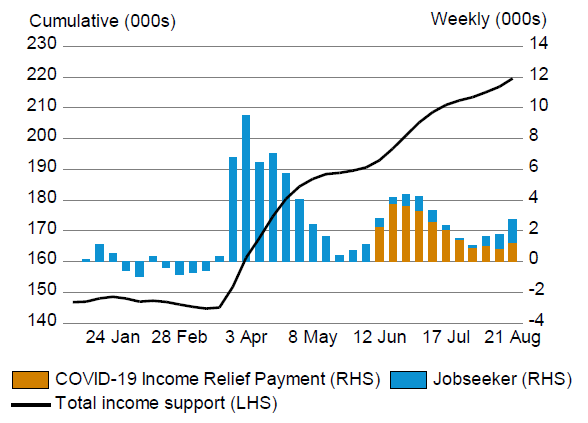 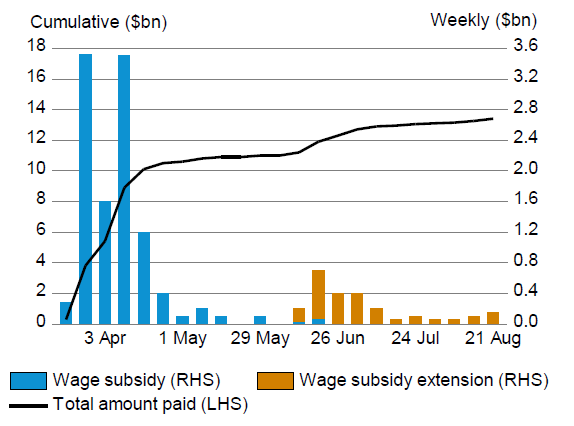 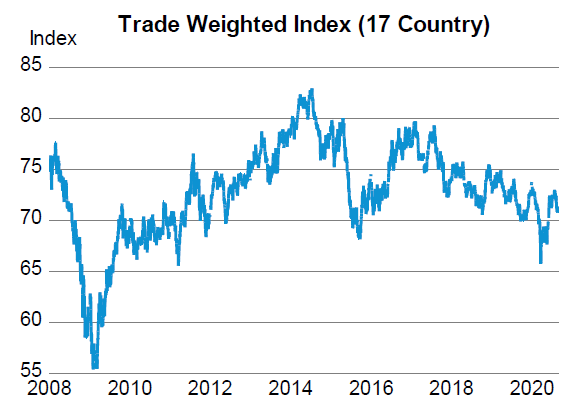 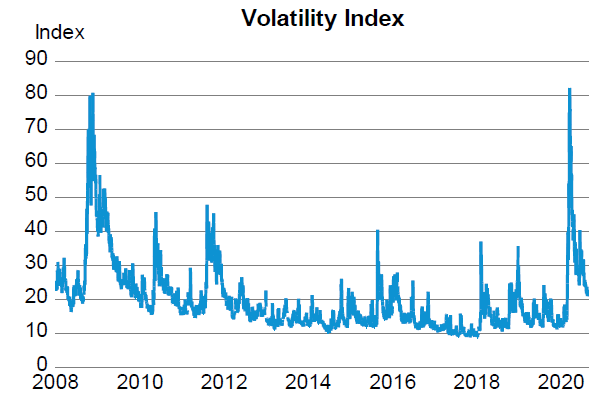