As expected, retail trade was significantly impacted by COVID-19 restrictions in the September quarter. However, economic activity has been recovering and overall demand has remained resilient, contributing to the Reserve Bank’s decision to raise the Official Cash Rate (OCR) with further increases expected ahead. As interest rates rise, inflationary pressures are expected to ease as household spending turns towards servicing household debt.

Retail sales volumes fell 8.1% in the September quarter, owing to the effect of the Delta outbreak and associated restrictions. Reflecting previous data releases, Auckland has been the most significantly affected region and hospitality the most impacted industry. Despite this fall, the rebound seen in the weekly electronic card spending data since late September is expected to continue as restrictions ease, supporting household consumption and the economic recovery in the December 2021 quarter. 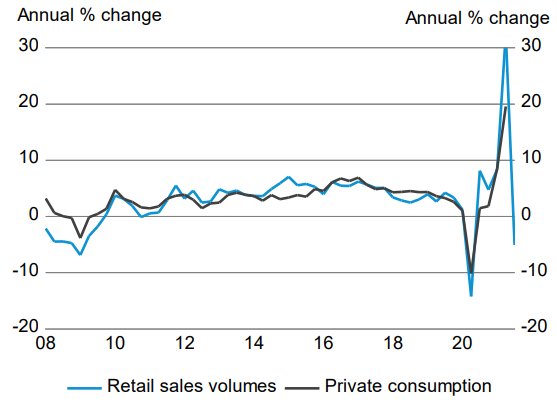 …contributing to an OCR increase…

The Reserve Bank increased the OCR by 0.25 percentage points to 0.75% in the November Monetary Policy Statement (MPS) with annual headline Consumer Price Index (CPI) inflation at 4.9% and unemployment at 3.4%. In line with survey-measures of inflation expectations, the Reserve Bank expects annual CPI inflation to be above their target band in the near before returning towards the 2% midpoint target over the next two years.

The Reserve Bank expects to gradually remove monetary policy stimulus further over time given the medium-term outlook for inflation and employment. The MPS shows the OCR increasing to 2.6% by September 2024, about 0.5 percentage points higher than expected at the August MPS.

…which will dampen household spending

Household debt increased significantly over the past year and a half, reaching 169% of disposable income at the end of the June 2021 quarter. Most of this is in housing, with housing lending growth reaching a peak in July and remaining elevated at 11.6% in September 2021.

Figure 2: Residential mortgages by time until next repricing Growth in advanced economies seems to be picking up in November, though rising COVID-19 cases in Europe pose a threat to the recovery. Supply chain disruption continues to drive inflation higher, and the stage appears set for a faster tightening in monetary policy in the US.

Purchasing Managers Indexes (PMI) for November indicate a strengthening recovery in advanced economies, with most composite output indexes lifting further into expansionary territory (Figure 3). Supply chain issues featured strongly in the surveys as delivery times lengthened and shortages were reported. This flowed through into rising price pressures, with growth in input costs near or exceeding record highs, suggesting that high inflation is unlikely to abate in the near term. Growth unexpectedly picked up in the euro area, though rising COVID-19 cases and weakening business confidence suggest that the improved performance may be short-lived. The UK PMI rose to the top of the pack for the first time this year, with strong employment growth combined with record inflationary pressures suggesting that a tightening in monetary policy may come soon.

Minutes of the US central bank’s November policy meeting show that a growing proportion of members are open to a faster reduction in monetary stimulus if high inflation persists. The data since the meeting in early November suggest that these conditions may have been met. US consumer prices as measured by the Personal Consumption Expenditure deflator rose by 5.0% on an annual basis in October, the highest in nearly 40 years. Price inflation for goods was even stronger at 7.5%, with lower services price inflation pulling down the headline number. Consequently, financial markets now pricing in an interest rate increase by the middle of next year.

…but COVID-19 spread in Europe is a threat

Daily COVID-19 cases in Germany, Austria and the Netherlands have risen well above previous records, and although deaths have remained much lower than previous waves, these are also on the rise (Figure 4). This has resulted in new restrictions, and in some cases these have been met with violent protest. Consumer confidence in the euro area fell to its lowest level in 7 months, indicating future weakness in household demand.