A new community case of a Managed Isolation and Quarantine (MIQ) worker in Auckland reported on Monday has been epidemiologically linked to a case in the MIQ facility. The worker is self-isolating, and no additional cases have been recorded. While households are feeling more confident about their personal financial situation, they are concerned about the economy's long-run trajectory. The survey also showed a big difference in confidence levels across age groups, with younger New Zealanders (those aged 18 to 29), more concerned about their financial situation. According to Westpac, one big factor that's likely to have influenced this split in confidence across age groups is the high level of house price growth.

New housing policies were announced by the government this week, including the end of tax- deductible interest on investment properties, the extension of the bright-line test from 5 to 10 years, and the establishment of a Housing Acceleration Fund committed to infrastructure investment.

These polices are intended to make inroads towards addressing housing affordability by reducing investor demand for housing, thus freeing up more stock for owner occupiers, and by increasing the supply of new housing.

The seasonally adjusted monthly trade deficit narrowed from a deficit of $673 million in January to $224 million in February as export values increased and imports fell. The annual trade surplus continued to decline from November's record high, falling to $2.4 billion. Consumption and capital goods imports were both up on an annual basis after recovering at the end of 2020 (Figure 2). 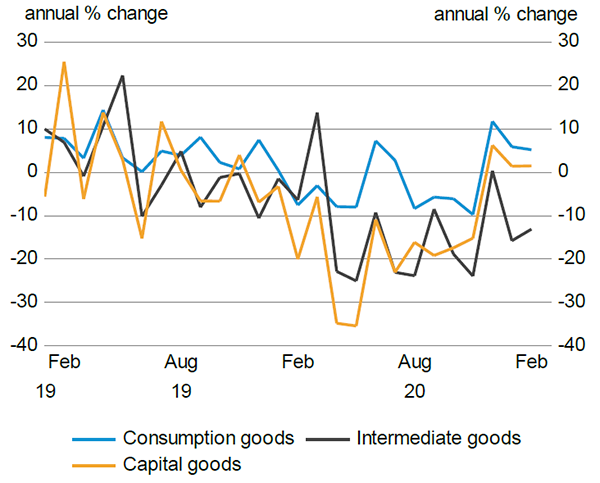 On a seasonally adjusted monthly basis, goods exports rose 1.1% in February, following two months of decreases, though values remain well below year-ago levels. Log exports fell while meat and fruit exports recovered from dips in January, and dairy products were flat. Monthly goods imports fell 7.5% after two months of increases, to be only slightly down compared to February 2020.

Growth in imports is expected to be subdued going forward, now that values are close to pre-pandemic levels. Export values will likely see more robust growth in coming months, driven by the recent strengthening in commodity prices. The annual trade balance is expected to continue declining over 2021 as last year's weakness in imports falls out of the annual balance.

Purchasing Managers Index (PMI) readings for advanced economies show an ongoing recovery in March, with most headline indices now in expansionary territory (Figure 3). Readings for the United Kingdom (UK) and euro area both rose sharply, though the return of COVID-19 restrictions in Europe will likely result in a fall in the euro area index next month. Australia and the United States (US) remain at high levels, with virus containment in Australia and the successful vaccination programme combined with fiscal stimulus in the US helping them to outperform. Japan's index remains contractionary, with the country's state of emergency being lifted just this week. Despite the renewed national lockdown in January, the UK unemployment rate fell to 5.0% from 5.1% in December. This was not due to an improvement in the labour market, however, as employment numbers dropped by 147,000. The drop in the unemployment rate was instead driven by a reduction in the labour force participation rate as fewer people actively looked for jobs, likely as a result of the renewed COVID-19 restrictions.

Central banks in the UK, Japan and Thailand all maintained their low policy rates this week, and the European Central Bank increased the pace of its bond-buying programme to counter the recent sell-off in debt markets. In the US, Federal Reserve Board Governor Brainard reiterated a commitment to maintain support, noting a focus on "outcomes rather than outlook". Meanwhile, central banks in Turkey, Brazil and Russia increased policy rates amid concerns over rising inflation.

Annual consumer price inflation in the UK and Japan remained subdued in February, with the annual rate falling to 0.7% in the UK and rising to 0.4% in Japan (Figure 4). Consumer confidence in the euro area increased sharply in March, despite expectations of a fall as restrictions were tightened in several countries. The index rose to −10.8, the highest level since February 2020 but still well short of pre-pandemic levels. With virus cases continuing to rise, the recovery in consumer confidence is unlikely to be sustained over the coming months.

Mobility restrictions have been reinstated in France, Germany and Italy amid a surge in cases of a more transmissible strain of COVID-19. Restrictions are not as tight as during previous lockdowns, suggesting that they may be in place for longer as the countries work to vaccinate their populations.

Difficulties with securing and distributing vaccines continue in Europe, with the European Union (EU) now taking a tougher stance on the exporting of EU-made vaccines. Securing vaccines is only part of the problem, however, given that nearly a fifth of delivered vaccines in the EU have not been used and a growing percentage of Europeans consider the AstraZeneca vaccine to be unsafe.