Activity indicators from the BNZ-BusinessNZ Performance of Manufacturing and Services Indexes rebounded into expansionary territory in the June month results, although employment indicators remain in contractionary territory, signalling a continued softness in the labour market. Credit card spending data supports the view that household spending has been more resilient than expected in the Budget Update, and dairy prices remain elevated prompting Fonterra to lift their milk price forecast for the 2021 dairy season.

European Council members agreed details of a financial package for the European Union that includes a recovery fund equivalent to 4.5% of GDP.Continuing COVID infections in the United States may result in a slower recovery as some states move to reverse or delay re-opening plans, and jobless claims remain elevated and consumer sentiment falls. Australia's Government will extend the duration of its labour market support programmes beyond the September 2020 quarter.

Still no cases of community transmission…

More cases of COVID-19 have been reported in managed isolation facilities this week, though there remains no evidence of community transmission. The Head of Managed Isolation and Quarantine has warned that NZ's facilities are nearing full capacity. There are now 22 active cases in the country, all of which recently returned from overseas and are in managed isolation. Around 450,000 COVID-19 tests have been conducted since January (Figure 1). …and paid jobs held up in June…

The experimental weekly paid jobs series from Stats NZ suggests employment continued to hold up in June (Figure 2). For the week ended 21 June, the most accurate measure (which lags by 27 days) showed the total number of paid jobs up 4.5% on the same week in 2019. At the industry level, paid jobs in the primary industries were up 10.1% on last year, goods-producing jobs were up 2.5%, and services jobs were up 3.1% on 2019 after falling by around 80,000 between March and April 2020.

This experimental series counts the number of unique employer-employee relationships present in payday filing. The data are not subject to the usual adjustments for seasonality and data flow issues, so caution should be exercised when interpreting them. The official unemployment rate for the June quarter will be published on 5 August. 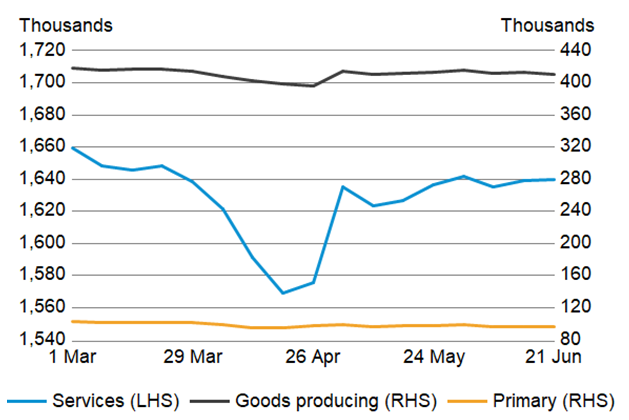 High-frequency activity indicators continued to hold steady during the third week of July. In the week ending 19 July, electricity demand was 3% above 2019 levels and weekly card spending was up 1.5% on last year.

Around 18,600 people were receiving the COVID-19 Income Relief Payment (CIRP) as of 17 July, up 2,100 on the previous week. The number of Jobseeker Support recipients increased by nearly 300, even as more recipients transferred onto the CIRP. The total number of people receiving income support (Jobseeker and CIRP) was 211,000 - up 2,300 on the week prior. 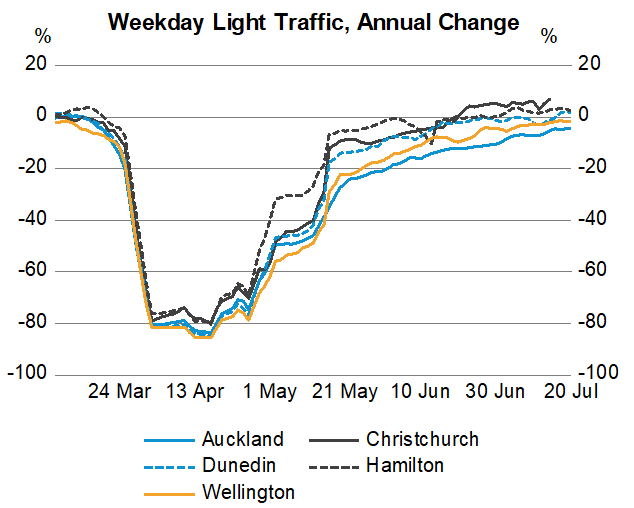 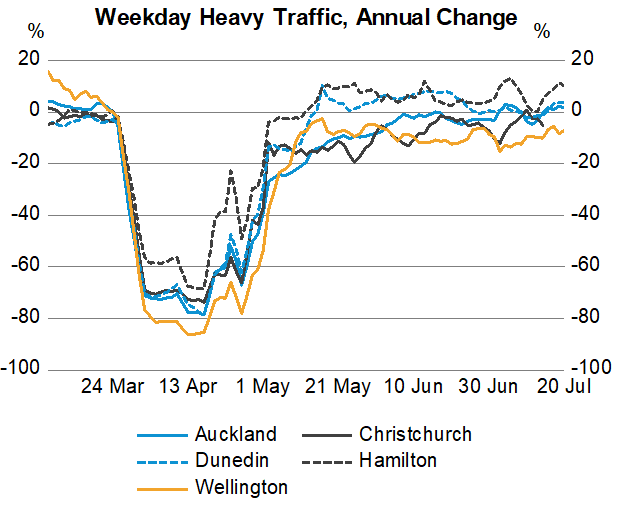 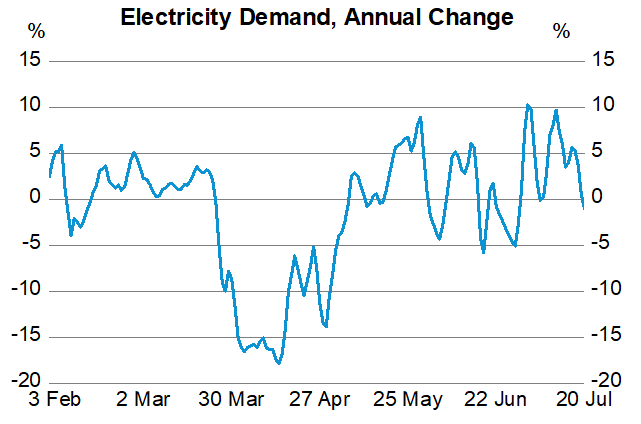 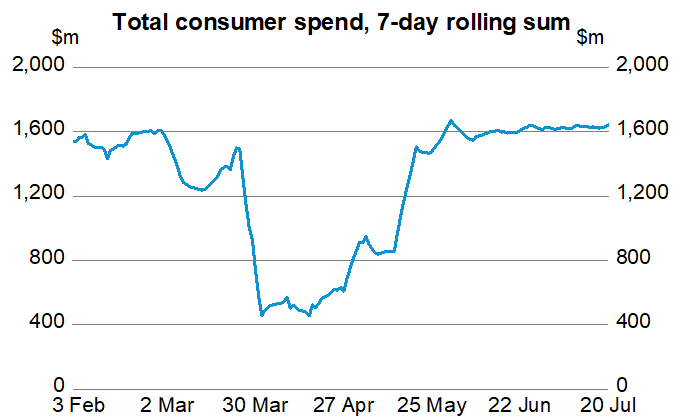 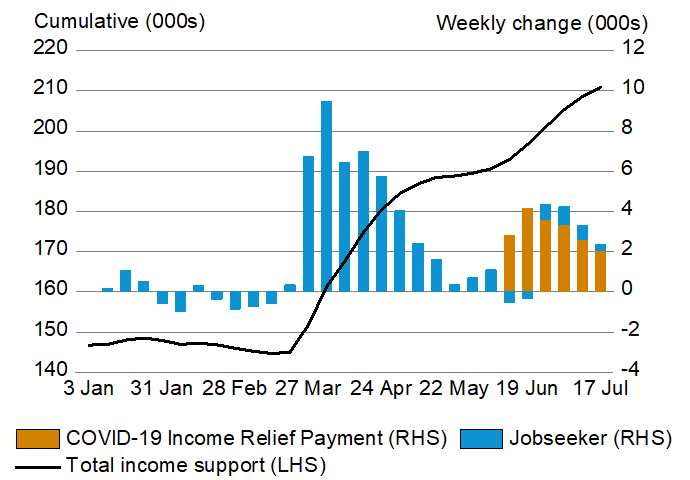 In June, the BNZ-BusinessNZ Performance of Manufacturing Index (PMI) and Performance of Services Index (PSI) both lifted into expansionary territory again for the first time since February. The PMI rose by 16.5 points to 56.3 and the PSI rose by 16.6 points to 54.1. As a result, the composite index rose to 54.5 (Figure 3). An increase in production and new orders drove the lift in the PMI while in the PSI, sales activity and new orders rose significantly. These results are consistent with other high frequency activity indicators seen recently. The RBNZ's credit card statistics show that spending on New Zealand-issued cards fell nearly 17% in the June quarter to be down almost 4% over the year ended June (Figure 4). While this is the largest quarterly drop in spending on record, it is less of a fall than we expected at the Budget Update (BEFU). These statistics are consistent with other recent high-frequency consumer spending data, which show that spending has been more resilient than expected. This partly reflects less time spent at alert level 3 than was anticipated at BEFU, as well as levels 3 and 2 being less restrictive than expected at the time. Spending has also held up better than expected, assisted by government and bank support measures, including the Wage Subsidy Scheme, the Small Business Cash Flow scheme, mortgage repayment holidays and the RBNZ's large scale asset purchase program. It is unclear how much of this resurgence in spending is simply due to pent-up demand at this stage, but, consistent with other forecasters' views, we expect spending in the June quarter to hold up better than forecast at BEFU. 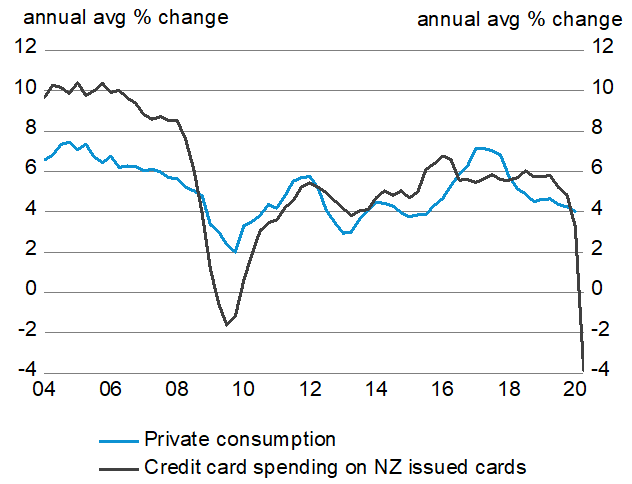 Dairy prices slipped 0.7% in USD terms at the latest GlobalDairyTrade auction, and were down 1.9% in NZD terms (Figure 5). Whole Milk Powder and Cheddar prices both rose 0.6% but other product prices fell. The latest fall comes after a period of strong auction results and the outlook remains positive for farm gate milk prices. Fonterra upgraded its milk price forecast for the 2021 dairy season to a range of $5.90-$6.90/kg of milk solids, from its initial $5.40-$6.90/kg range. 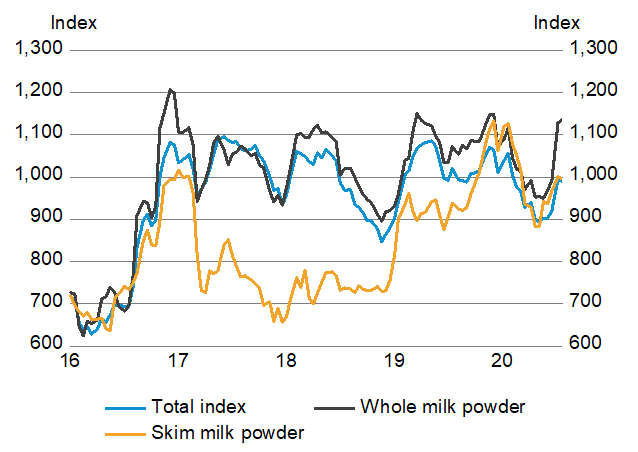 European Council members agreed details of a €1.82 trillion financial package that includes a €750 billion (4.5% of GDP) recovery fund and a seven‑year €1.08 trillion budget. Leaders agreed that €390 billion of the fund will be distributed as grants with the remainder being low interest loans. Countries worst affected by the pandemic will receive larger shares of the fund, with Italy and Spain potentially receiving about 5% of their GDP over three years.

Commentators consider the agreement to be a pivotal moment for the euro area, because it represents the first time that there will be large, fiscal risk-sharing across countries in the region. The European Union will borrow the funds on behalf of all the member states and a large portion does not need to be repaid. Approval by national parliaments and the European Parliament is required to put the package into place, and this is expected to occur by the end of the year.

Pace of US recovery may slow

In the United States (US), June's retail sales report showed sales were 7.5% higher than in May and just 1% below their value at the start of the year (Figure 6). Restaurant and bar sales rose 20% in the month, reflecting re-openings, but remained over 27% below their January level. 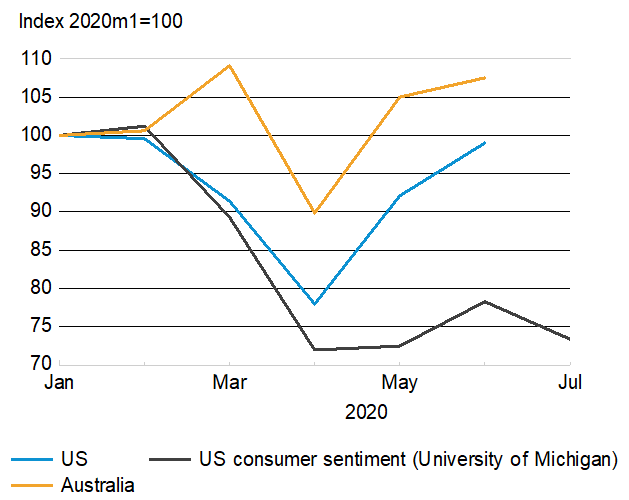 Meanwhile, the US daily COVID case count rose to a new high last week, prompting affected states to reverse or delay some of their re-opening plans. The continued spread of the virus likely drove the fall in July's University of Michigan consumer sentiment survey (Figure 6).

US jobless claims remain elevated, with initial claims slightly lower at 1.3 million for the week ending 11 July, and continuing claims down modestly to 17.3 million through July 4. Total claims including pandemic emergency programs edged down to 32.0 million. Overall, the recent stickiness of job claims, weaker consumer sentiment and a fading pent-up demand impulse point to a slower pace of US economic growth in the September quarter.

Australia retail sales also posted a strong gain in June, up 2.4% on May and 7.1% higher than its pre-virus level (Figure 6). Hospitality and clothing sales led the rise, consistent with easing containment measures.

Australia's Government will extend the duration of its labour market support programmes beyond the September 2020 quarter, quelling fears of a ‘fiscal cliff’. The JobKeeper scheme is extended by six months until 28 March 2021, with the level of support progressively scaled back from the current AU$1500/fortnight to AU$1200 from October and AU$1000 from January. A lower payment for those working less than 20 hours per week prior to March 2020 will be introduced. The number of JobKeeper recipients is expected to decline from the current 3.5 million to around 1 million in the March 2021 quarter as employment picks up and eligibility criteria are retested each quarter. Supplementary JobSeeker unemployment payments have been extended to the end of December, also at a lower rate. Overall, these extensions represent additional spending of around AU$20 billion or 1% of GDP.