A new case of COVID-19 was reported in the community on Sunday, with two workplace contacts subsequently testing positive, though the risk of further community transmission is considered to be low. The NZ Activity Index indicated a recovery in September, and card spending appears to have recovered following a dip in early October. Business sentiment and activity indicators rose in the September quarter, and indexes of manufacturing and services industry performance showed signs of improvement.

China’s economy continued to recover strongly, with September quarter GDP 2.7% higher than the previous quarter, and 4.9% higher than the same quarter a year ago. This is supporting demand for dairy products, and underpinning prices, which rose for the third consecutive GlobalDairyTrade auction this week.

COVID-19 cases found in the community

After several weeks without a case of COVID-19 outside of managed isolation facilities, a new community case was reported on Sunday (Figure 1). Genome sequencing shows that the new case is not linked to any existing local cases, and the source is expected to be an overseas ship that the man worked on in Auckland on 13 October. Close contacts of the case are self-isolating, and two workplace contacts have since tested positive. 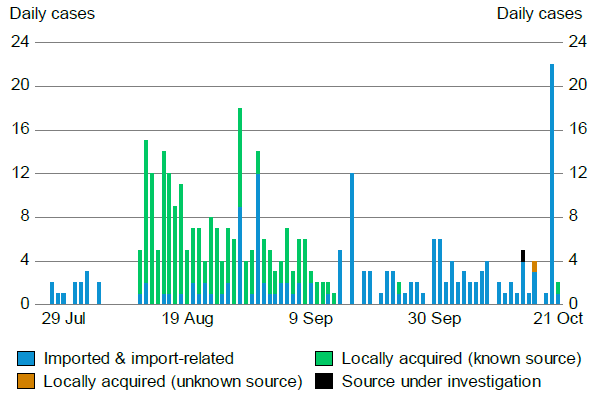 The New Zealand Activity Index (NZAC) shows a recovery in September, with activity up 1.0% on September 2019 (Figure 2). Most constituent indicators were above 2019 levels such as traffic movements, grid demand, and the performance of manufacturing index. Other indicators, such as business confidence and job advertisements, were still below last year’s levels. The number of people receiving income support (including the COVID-19 Income Relief Payment) had declined from August but was still high compared to September 2019. The NZAC value for August was revised down from -1.4% in the previous release to -1.7%. After a dip in early October, high-frequency card spending data indicate a recovery to the previous Alert Level 1 average in both Auckland and the rest of the country (Figure 3). City centres also appear to have caught up with regional areas. In the week to 21 October, card spending in the Auckland city centre was around 1% below the previous AL1 average. The NZIER Quarterly Survey of Business Opinion (QSBO) showed that business sentiment and activity indicators improved in the September quarter, reflecting a combination of fiscal support, pent-up demand, strong housing and construction activity and a pick-up in domestic tourism. Firms’ reported trading activity in the September quarter was evenly split between those who experienced a rise in domestic trading activity and those who experienced a fall. This is well up on the net 37% who reported a fall in the June quarter, but remains below the recent average of the indicator. This is the indicator most closely aligned to GDP growth, and if taken at face value it would suggest September quarter activity was on a par with the same quarter a year ago (Figure 4). Firms’ expectations about their own activity over the next three months was also evenly split between those expecting a rise and those expecting a fall, and also well up on the previous quarter. NZIER report that the strong pipeline of Government construction work over the coming years is supporting a rebound in construction confidence, while services sector firms remain relatively cautious about the outlook, with a net 49% expecting worse outcomes ahead.

Sentiment on the general business outlook improved, but remains deeply pessimistic with a net 39.4% of firms expecting the outlook to deteriorate. Employment expectations were positive, with net 10% of firms expecting more hires this quarter, and firms are experiencing increased difficulty finding skilled labour. Investment confidence improved, as did profitability expectations with the latter reflecting the survey’s report that businesses are finding it easier to increase prices. This survey is consistent with other indicators, including June quarter GDP and card spending data that suggest activity in the economy is proving more resilient than expected. September quarter labour market data, scheduled for release on 4 November, will provide further insight into activity over the quarter.

… activity indicators are back above break-even

The BNZ-BusinessNZ Performance of Manufacturing Index (PMI) rose 3.0 points in September, to 54. Production was up 4.9 points, new orders rose 3.9 points and employment was 2.4 points higher. BNZ cautioned that, although the PMI is now above its long-term average of 53, it should not be confused with above-average levels of activity, as it indicates growth off the low base set earlier in the year. The Performance of Services Index (PSI) rose 3.1 points from August to 50.3. Sales rose 7.6 points and new orders were up 6.9 points. The GDP-weighted combined index rose 3.1 points to 50.8. The pickup in the PMI and PSI is consistent with the increase in activity expected following easing of Alert Level restrictions. In this week’s GlobalDairyTrade auction, the index rose 0.4% in US dollar terms from the previous event. Whole milk powder prices rose 0.3% while skim milk powder prices were down 0.2%. Last week Fonterra increased their forecast milk price for the 2020/21 season, with the midpoint increasing from $6.40 to $6.80/kgMS, citing increased demand from China as a key factor holding prices up.

China’s September quarter GDP rose 2.7% from the previous quarter, to be 3.2% above pre-COVID levels, and 4.9% higher than the same quarter a year ago. This followed June’s 11.7% rise (Figure 6). In terms of the composition, consumption was the largest contributor to the year-on-year change, followed by investment and net exports. Meanwhile, monthly activity data showed solid momentum in September, which bodes well for December quarter growth; industrial production rose 0.9% in the month and retail sales rose 2.3%, while fixed asset investment was up 8.7% on a year ago.

The IMF recently upgraded its 2020 growth forecast for China by 0.9%-points to 1.9%, a little below recent consensus forecasts of 2.1%. 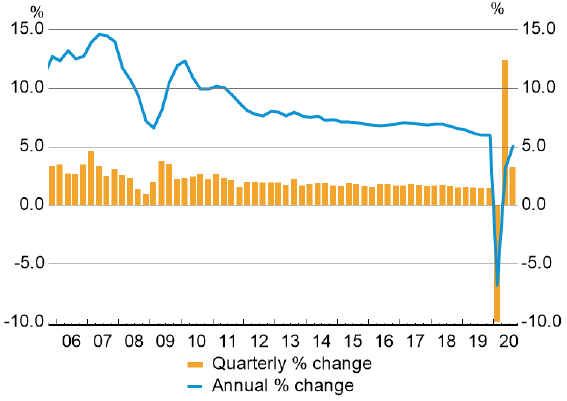 September retail sales also strengthened in the US, rising 1.9% in the month, but US industrial production declined 0.6%, to be about 6% below pre-COVID19 levels. The housing market continued to strengthen, with single-family starts rising for the fifth consecutive month to a 13-year high. However, economists continue to question the sustainability of the recovery in the absence of more fiscal support.

Expectations of further monetary easing in Australia gained further traction. Reserve Bank Board minutes and a speech by Assistant Governor Kent reinforced analysts’ views that the Bank considers further policy easing is warranted and that a cut to the cash rate and the 3-year yield curve control target would be beneficial, as would buying bonds further out along the yield curve in a more conventional quantitative easing policy.

The Minutes also elaborated on the shift in the Bank’s forward guidance, with increased emphasis on unemployment as the key indicator on when rates might eventually rise. The Board also agreed to place more emphasis on actual inflation, rather than forecast inflation, in its decision making.

There is some uncertainty in the market about when the Bank will act, although financial markets attach an 80% probability to a policy change in November.

Preliminary retail sales fell 1.5% in September from August, but remained 4.6% higher than pre-COVID levels. Sales in the September quarter were 6.8% higher than in the June quarter.

In the last two weeks of September, payroll jobs dropped across all states despite easing of restrictions everywhere except Victoria. It is unclear what drove the decline, some analysts attributed it to the paring back of JobKeeper, others to volatility in the data given it tends to be revised higher in time and is not seasonally adjusted. 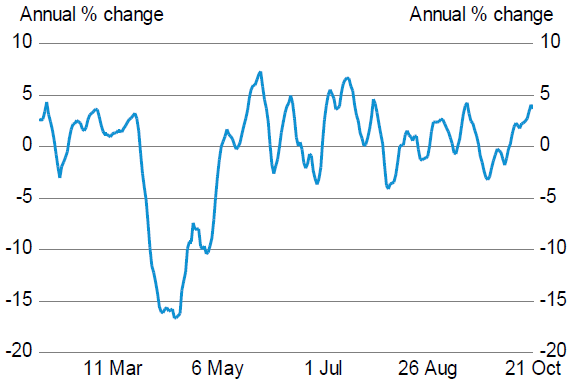 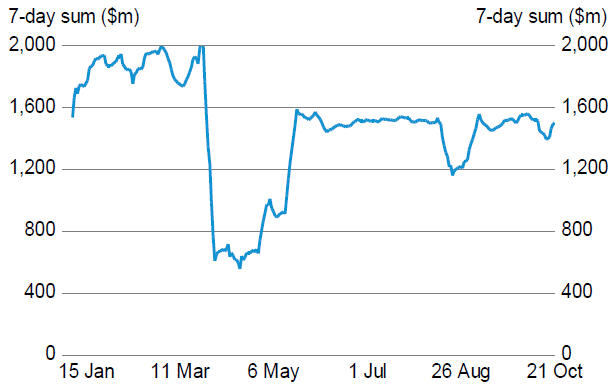 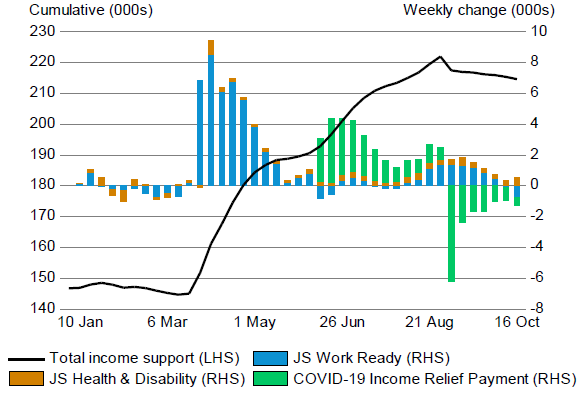 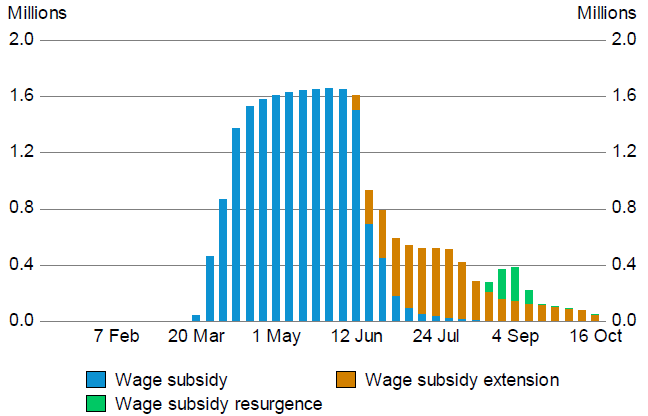 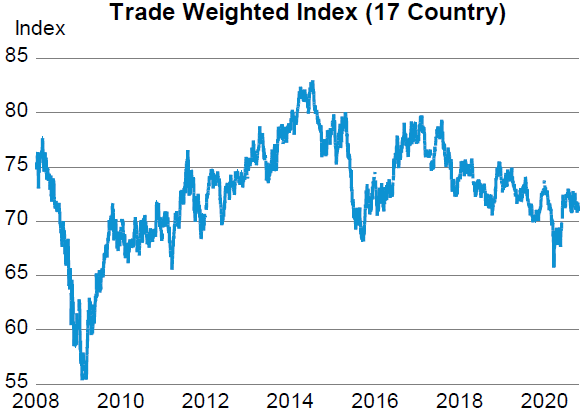 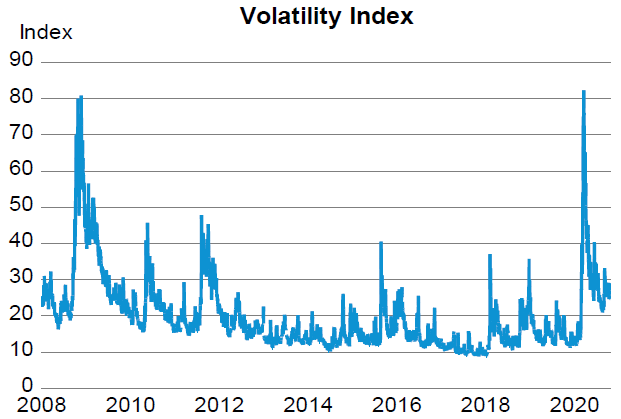