A total of 65 people who have tested positive for COVID-19 are now in quarantine in Auckland, and the city will remain at Alert Level 3 until 26 August as the rest of the country remains at Level 2. High-frequency data suggest that activity in Auckland dropped quickly after restrictions were reinstated. Affected businesses may be eligible for an additional two-week wage subsidy, and the mortgage deferral scheme has been extended into 2021. Performance indicators for manufacturing and services showed resilience in July and the housing market held up, though renewed COVID-19 outbreaks worldwide weighed on dairy prices.

Incoming data in the United States (US) and China remain consistent with expansion, but momentum is slowing. Elsewhere, the data showed June quarter GDP contracted considerably in Japan, Thailand and across Scandinavia. In Australia, employment and hours worked continued to recover in July, although these data predate the second Melbourne lockdown. The unemployment rate rose to 7.5%.

A total of 65 people from the Auckland community who have tested positive for COVID-19 have been moved into the city’s quarantine facility. Household contacts of the community cases are also in quarantine. Genome testing has revealed that one of the new cases is not linked to the community cluster. Over 150,000 tests have been conducted since 12 August, bringing the total to over 650,000. 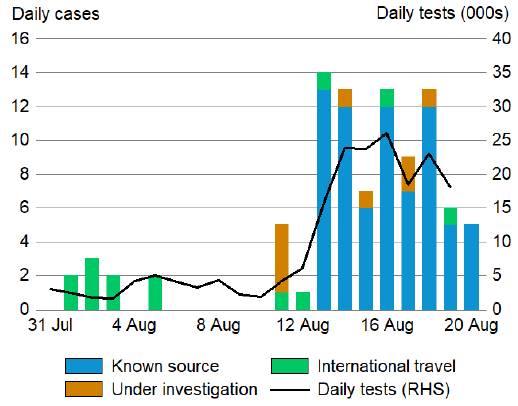 …and Alert Level restrictions are extended…

Auckland will remain in Alert Level 3, and the rest of NZ in Level 2, until 26 August. New Zealand now rates 74 on the Government Response Stringency Index, above the OECD median (Figure 2). 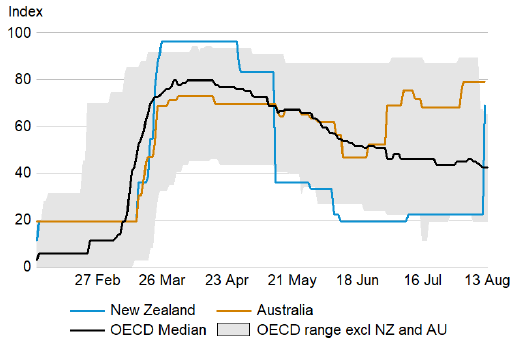 Traffic and card spending data suggest that activity in Auckland dropped quickly after Alert Level 3 was reinstated (Figure 3). On 17 August, light and heavy traffic fell to around 65% and 85% of 2019 levels, respectively, and card spending was around 75% of the average over January and February. Around 22,800 people were receiving the COVID-19 Income Relief Payment (CIRP) as of 14 August, an increase of 800 on the previous week. The total number of people receiving income support (Jobseeker and CIRP) was 216,800 – up 1,800 on the week prior. Weekly growth continued to rise.

The BNZ-BusinessNZ Performance of Manufacturing Index (PMI) rose again in July, up 2.6 points to 58.8, indicating that economic activity continued to improve (Figure 4). New orders rose 9.1 points but employment slipped by 2 points. The Performance of Services Index (PSI) remained unchanged from June at 54.3. Employment recovered, up 4.7 points, but sales and new business were both down 4.0 points. The GDP-weighted combined index rose 0.5 points to 55.0. The June quarter Producers Price Index (PPI) showed that on average, across all industries, output prices fell by less (down 0.3%) than input prices (down 1.0%) in the quarter. The drop in input costs was driven by falling prices for crude oil, milk and meat. For the year as a whole, input prices fell (down 0.1%) while output prices rose by 1.5%.

…and house prices and sales are holding up

The housing market continued to show resilience, with house prices in July up 1.5% in the month to be 9.4% higher than a year ago. The number of properties sold in July increased 21.6% from a year ago, recording the highest number of sales in July for 5 years (Figure 5).

Pent-up demand from a period of restricted real estate activity in April and May, along with accommodative monetary policy has contributed to the strength in buyer interest in recent months. Median house prices rose 14.8% on an annual basis in July and, at $660,000, have largely retraced the fall seen in May, which reflects the strong level of interest from buyers. Median days to sell fell 7 days from July 2019 to 24, which is the lowest for the month of July in 4 years. 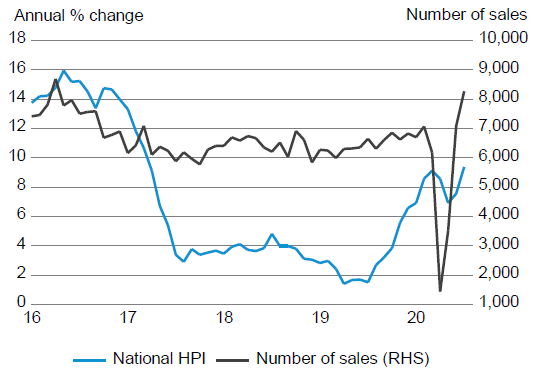 The housing market was stronger than expected in recent months, which poses upside risks to our forecasts. However, we expect the deteriorating labour market and the impact of lower migration from continued border restrictions to lower house prices in the year ahead. The recent outbreak of community-transmitted cases of COVID-19 in Auckland will also be adding increased uncertainty in the mix, particularly if the current period of heightened levels of restrictions on activity is extended.

Businesses affected by the new lockdown measures may be eligible for a two-week wage subsidy if their revenue has declined by 40% for at least 14 days between 12 August and 10 September compared to last year. The revenue criteria for eligibility is consistent with the existing wage subsidy extension and the rate remains unchanged at $585.80 for full time employees and $350 for part-time employees working less than 20 hours per week. The subsidy is available nationwide. The Reserve Bank also announced that the mortgage deferral scheme will be extended to 31 March 2021.

Dairy prices fell 1.7% in the latest GlobalDairyTrade auction as renewed outbreaks of COVID-19 in many parts of the world weigh on prices. WMP prices fell 2.2%, AMF was 2.9% lower and butter prices were down 2.0% while SMP prices rose 1.1%.

Incoming data in the United States (US) and China remain consistent with expansion, but momentum is slowing as the driver of the recovery rotates from the goods sector to the services sector, where social distancing remains a headwind to growth.

…but the pace remains solid in the US…

In the US, the S&P 500 stock market completed its recovery from February’s crash, reaching a fresh high on 18 August. Meanwhile, data shows that the economic recovery continued into July, albeit at a slowing pace. Headline retail sales rose 1.2% from June, and industrial production (IP) was 3.0% up on the previous month, driven by further increases in motor vehicle production and strong demand for consumer goods more generally. In level terms, retail sales have surpassed their pre-COVID levels but industrial output is down almost 9% (Figure 6). Housing starts and permits recorded monthly gains of 23% and 19% respectively, reflecting pent-up demand, low interest rates and increased demand for homes better suited to working from home. Analysts expect September quarter GDP to be around 5% higher than in the June quarter. This follows the 10% fall in the June quarter. 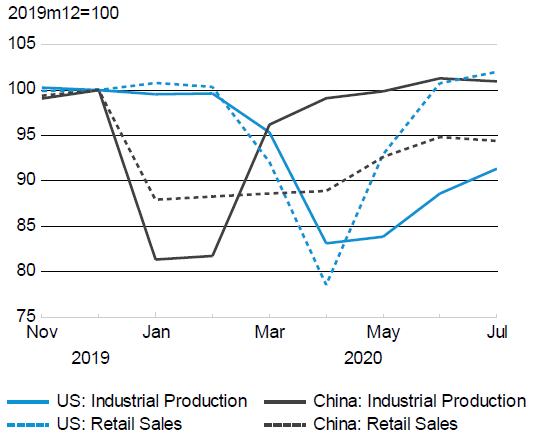 In China, July data showed the annual expansion in IP was steady at 4.8%, driven by continued strength in automobile production, which was up 27% on a year ago. Analysts noted that heavy rains and floods likely slowed growth in the month. Retail sales continued to lag, despite solid motor vehicle sales, down 1.1% from a year ago and about 5% below its pre-virus level (Figure 6). Fixed asset investment was 6% higher than a year ago, led by property investment. Exports also performed strongly, up 7.2% on July 2019, helped by consumer goods exports. The economic recovery is expected to continue and the analyst consensus is for full-year 2020 growth to be around 1.5%.

Elsewhere, the data have been less encouraging. In Japan, June quarter GDP was 7.8% lower than in the March quarter, the largest quarterly fall since WWII. Private consumption (-8.1%) and exports (-18.5%) led the fall. The outlook remains highly uncertain. There are signs new COVID-19 infections may be peaking, but analysts fear household income may fall sharply as fiscal support fades.

Thailand’s economy contracted at its sharpest pace in 22 years, with GDP down 9.7% in the June quarter compared to the previous quarter. The National Economic and Social Development Council cut its GDP forecast for 2020 to -7.3% to -7.8%, from -5% to -6% previously.

The contraction was less severe in the Scandinavian economies. Finland’s GDP fell 3.2% per cent in the three months to the end of June compared with the March quarter, while Denmark’s dropped by a record 7.4%. Both countries fared better than Sweden, which had no formal lockdown, where GDP contracted by 8.6%.

Australian unemployment rose to 7.5% in July

In Australia, employment and hours worked in July rose 0.9% and 1.3% respectively from June, although these data predate the second Melbourne lockdown. Unemployment rose to 7.5% from 7.4%, alongside a rise in the participation rate. The Treasury Secretary said unemployment could stay above 6% for four to five years. The Government announced a pilot programme to restart the international education sector. Up to 300 international students will start arriving in Adelaide soon. 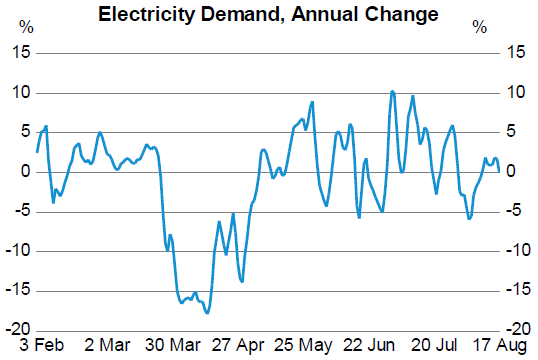 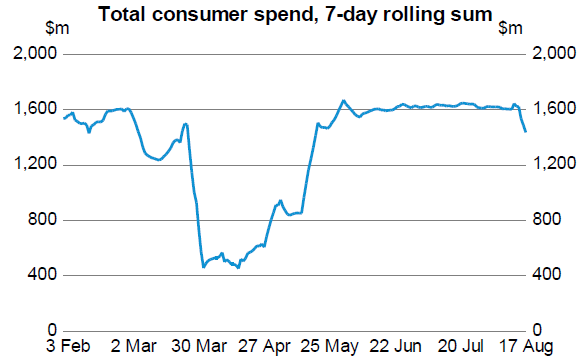 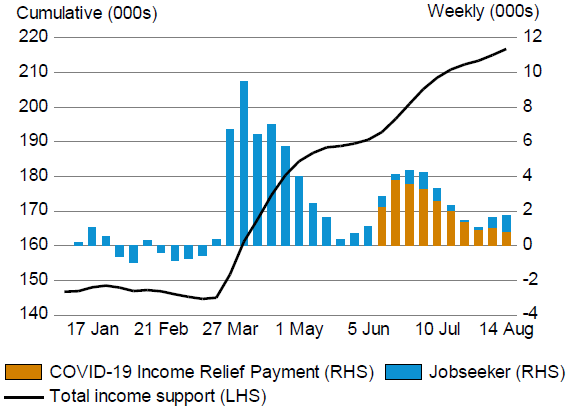 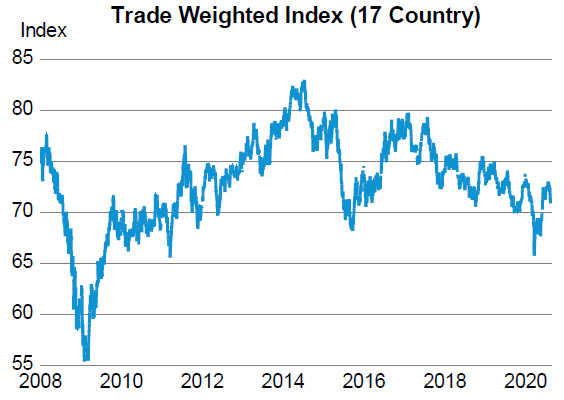 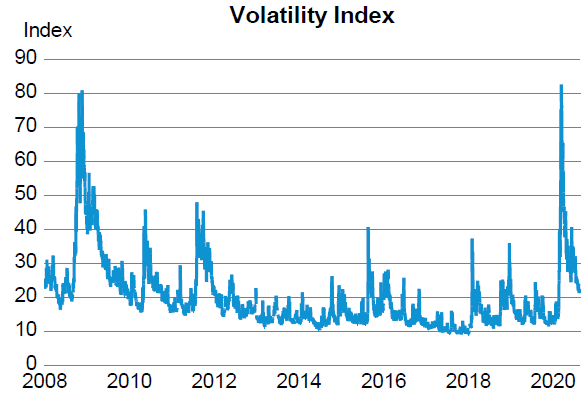