Manufacturing activity in China maintained its momentum, while US consumer confidence and euro area business sentiment both increased. While manufacturing and services indicators appear to be on the improve globally, risks to the global outlook remain, with a continued resurgence of COVID-19 cases in Europe.

There have been few community cases of COVID-19 during the second week of New Zealand (excluding Auckland) at Alert Level 1 (Figure 1). A large number of cases were reported on 1 October, though all of these were in managed isolation at the border. Cabinet will review Auckland’s Alert Level settings on 5 October. There are 11 active COVID-19 cases in the community and 42 active cases in managed isolation at the border, and the total number of tests conducted now exceeds 950,000. 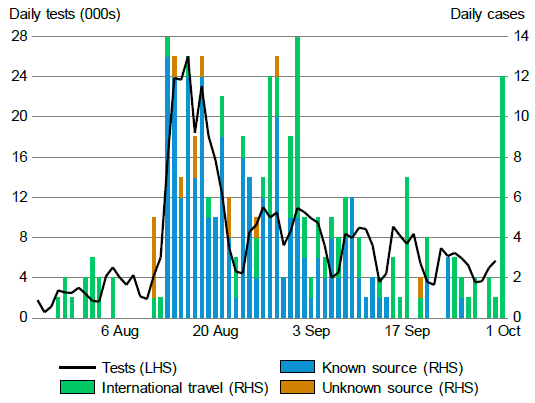 Card spending data suggest that national spending has held up at levels similar to the average over Alert Level 1. Spending in city centres has also largely recovered, with the exception of Auckland, where the central business district remains more than 5% below the Alert Level 1 average (Figure 2). In the week to 25 September, the number of people receiving the COVID-19 Income Relief Payment (CIRP) fell by 1,689 as Jobseeker Support recipients increased by 1,115. Total income support numbers (Jobseeker and CIRP) fell slightly to 216,273. Around 6.8% of the NZ working-age population is now receiving Jobseeker Support, though regional variation is apparent (Figure 3). Regions that have seen the largest increase since January include Northland and the Bay of Plenty. Activity indicators lifted a little further from the preliminary September read of the monthly ANZ Business Outlook Survey, but remains in negative territory. Firms’ own activity outlook rose to -5.4%, its highest reading since February, up from -9.9% the previous month (Figure 4). Headline business confidence recovered slightly to -28.5%, with both investment and employment intentions improving. As expected, Auckland businesses were a lot more pessimistic than the rest of the country in August but with alert levels easing in September, the gap has narrowed with regard to current employment levels. The services and retail sectors are most pessimistic while the construction and agriculture sectors most optimistic.

Every three months ANZ asks firms about their biggest problems, and what is driving their investment decisions. Firms reported finding skilled labour as the biggest concern. Given rising unemployment, ANZ says that the lack of skilled labour is undoubtedly the result of a significant skills mismatch between those who have lost jobs and the parts of the economy with the strongest employment intentions.

On an annual basis the total number of consents issued in the year remained high, at 37,500 slightly below the 45-year high of 37,900 recorded in the year to February 2020. Multi-unit dwellings recorded their highest annual level of consents since records began (Figure 5). 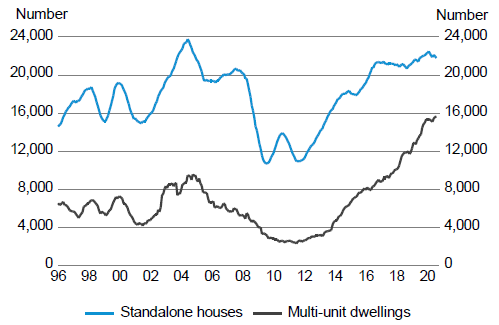 Job numbers rose by 9,147 to 2.2 million in August 2020 compared with July, boosted by a rise in filled jobs in the education and training sector, up 7,409. Filled jobs in most industries remained similar to last month. Filled job numbers are still well below March 2020 before COVID-19 restrictions began.

The worst affected industries include accommodation and food services (down 4,913 jobs) and transport, postal and warehousing (down 6,092 jobs). These service industries were most affected by border closures and higher restrictions imposed on hospitality at higher alert levels, but have partly recovered in recent months (Figure 6). Stats NZ calculates filled jobs by averaging weekly jobs paid throughout the month, based on tax data. 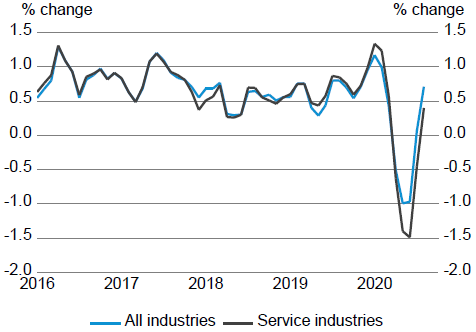 China’s manufacturing and services Purchasing Managers' Indices (PMIs) point to sustained momentum into the fourth quarter of 2020. China’s NBS manufacturing PMI increased to 51.5 in September from 51.0 in August, and the services PMI rose 0.9 points to 55.2, the latter likely reflecting improved sentiment in some of the hardest hit sectors, such as hospitality and tourism, as pandemic fears ease. China has reported zero local COVID-19 cases since 16 August.

This follows last week’s PMIs for Japan, the US and the euro area, which pointed to continued manufacturing expansion but a pull-back in services. Over the quarter ahead, global manufacturing demand is expected to continue to benefit from the combination of pent-up demand in the goods sector (particularly durables) and inventory adjustment.

…as sentiment improves in US and euro area

Consumer confidence improved in the US, as did business sentiment in the euro area, providing some offset to the downside risks to the consumer spending outlook, highlighted by the weaker services PMIs, rising COVID-19 cases counts, and diminished prospects of a pre-election fiscal package in the US. In the US, the Conference Board index jumped 15.5 points to 101.8 in September, the largest monthly gain in nearly 17 years (Figure 7). The present conditions sub-index led the increase, perhaps reflecting gradual re‑opening of business and improved labour market conditions. Meanwhile, the European Commission’s Economic Sentiment Indicator rose for the fifth successive month in September, recording a gain of 3.4 points to a six-month high of 91.1 (Figure 7). The survey recorded broad-based gains across industries and countries. However, the resurgence of COVID-19 cases and their corollary of new targeted lockdowns and more stringent social distancing measures may reverse these gains.

There were few data releases of note in Australia in the past week. Building approvals fell 1.6% in August, following a 12.2% rise in July, to be 0.6% higher than a year ago, while private sector credit was steady at 2.2% on an annual basis.

Next week the RBA Board meets and the Federal Budget is released, both on 6 October. Analysts expect no change from the RBA next week, but are increasingly of the view that the November meeting will see the cash rate lowered alongside the 3-year yield target and the Term Funding Facility rate.

Ahead of the Federal Budget (delayed from May), Treasurer Frydenberg indicated the budget will be in deficit over the forward estimates (ie, the next four years) and that this “first phase” of deficits will last until the unemployment rate is comfortably below 6%, which may not occur until 2023/24 according to analyst expectations.

As for possible measures, the press suggest: bringing forward of the previously-announced tax cuts to July 2021; an investment tax allowance; a possible "JobStart" program that would see the government subsidise new employment for SMEs; and additional infrastructure spending of up to $10bn. 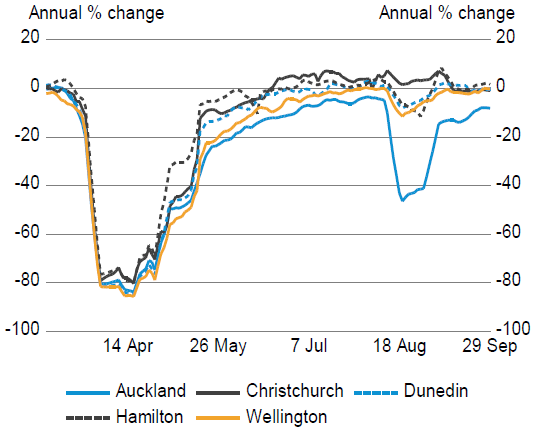 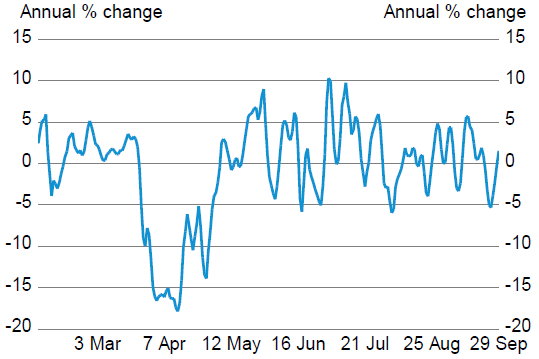 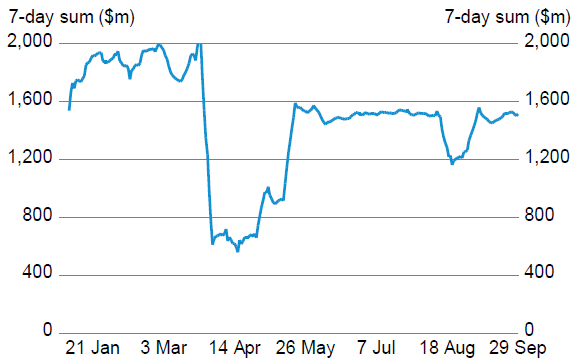 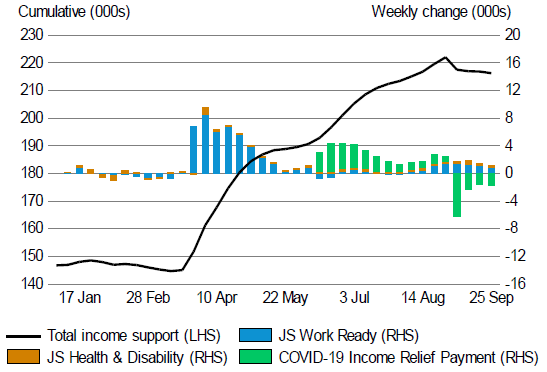 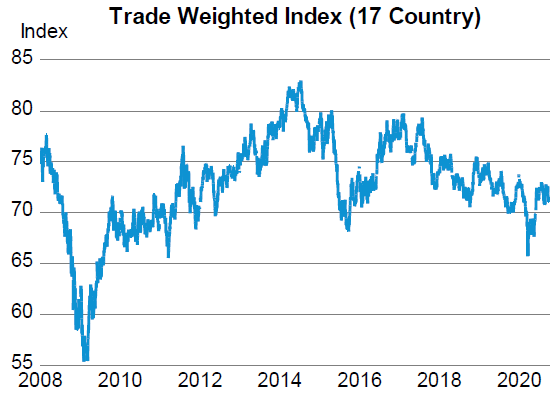