After 24 consecutive days with no new cases of COVID-19, New Zealand recorded two new cases on 16 June (Figure 1). The two women arrived together from the UK on 7 June, and were permitted on compassionate grounds to leave managed isolation on 13 June. Compassionate exemptions will be temporarily suspended, and 320 people have been identified as close contacts of the new cases. One additional case was reported on 18 June, though the man arrived from overseas and has remained in managed isolation. …and paid jobs recovered in May

Experimental employment data from Stats NZ show that the number of paid jobs in New Zealand rose in May, after falling significantly in April (Figure 2). The services industry saw the largest fluctuation. The data covers PAYE returns filed with Inland Revenue within 13 days after the end of each week, capturing around 93% of total paid jobs. 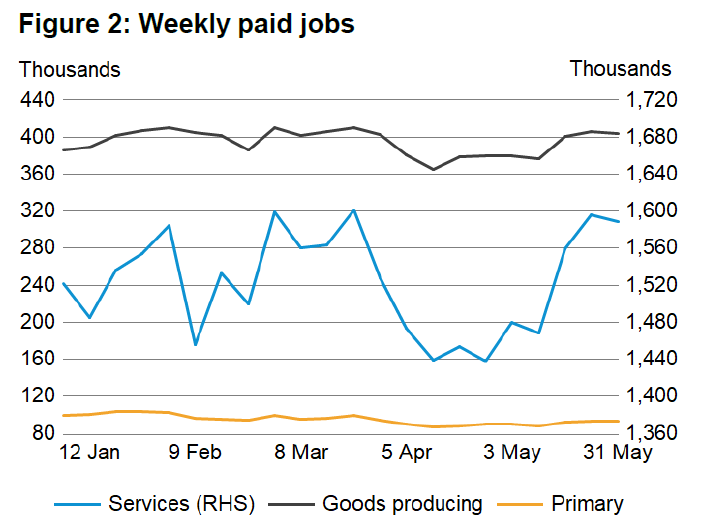 In the week ended 12 June, 2,816 people began to receive the COVID-19 Income Relief Payment, with 1,515 of these transferring from Jobseeker Support. Overall the number of people receiving Jobseeker Support fell by 548 over the week. 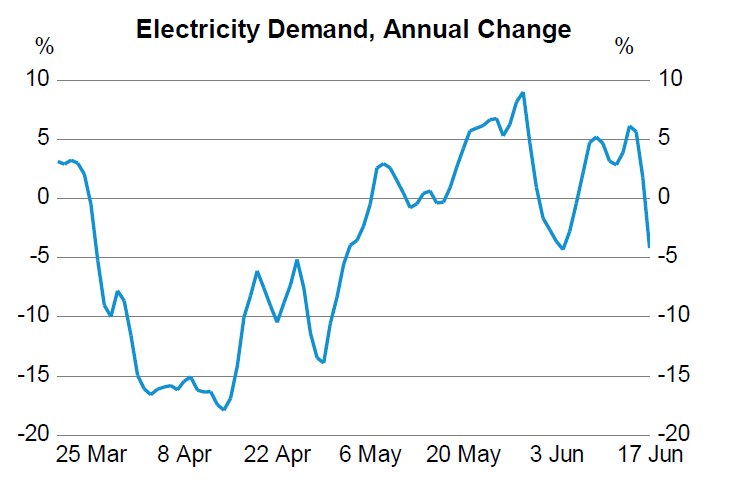 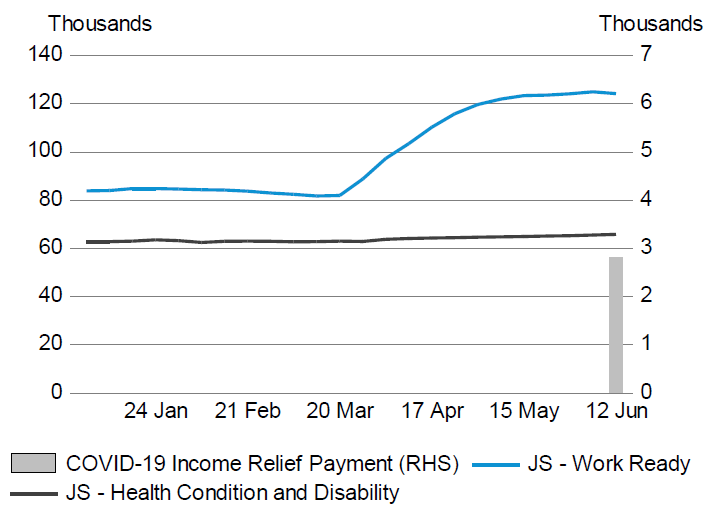 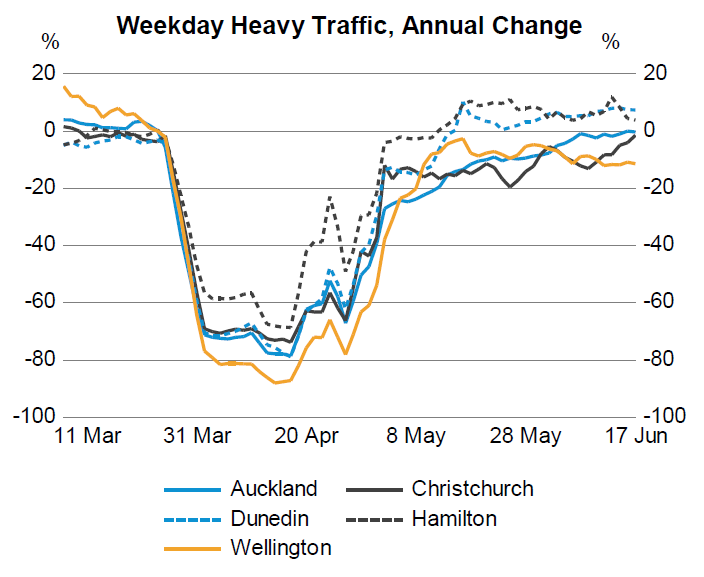 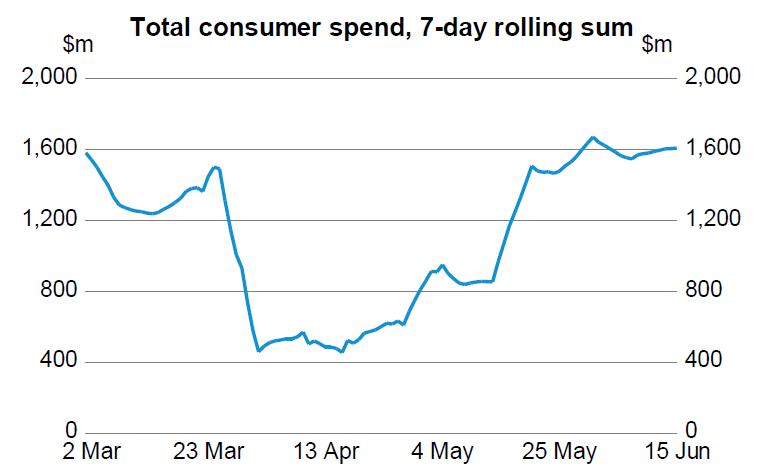 The BNZ-BusinessNZ Combined index bounced back up to 37.7 in May from a record-low of 25.5 in April (Figure 3). Manufacturing and services reached lows of 25.9 and 25.7 respectively in April. The manufacturing index rose to 39.7 and services recovered to 37.2 in May, as lockdown restrictions eased. Both indexes remain below their ‘break-even' level of 50, indicating that activity in both sectors were still declining. House sales bounced back in May, but were still around 50% below levels typically recorded prior to the COVID-19 outbreak. House prices continued to ease, down 0.3% from April, but are still 7.9% higher than a year ago. Buyer interest has remained resilient so far, possibility reflecting a degree of pent-up demand from the period in which lockdown measures prevented much of the usual housing market activity. However, given the weak economic outlook, with unemployment forecast to increase and considerable uncertainty remaining prevalent, house prices are expected to fall further over the remainder of 2020.

Consumer confidence fell 7 points in the June quarter in the Westpac McDermott Miller survey to 97.2.The fall is surprisingly moderate given the extent of the economic downturn, however, there remains a risk that consumer confidence will fall further in the September quarter as unemployment rises.

GDP fell 1.6% in the March quarter (Figure 4), the largest quarterly fall in almost 30 years, as the effects of COVID-19 (compounded by the effects of droughts in many parts of the country) started to impact on economic activity. Service industries contributed the most to the drop in activity, led by the hospitality industry, which fell 7.8%. The construction industry fell 4.1% and the transport, postal and warehousing industry was down 5.2%. Household consumption expenditure fell only 0.3% as spending on groceries ahead of lockdown offset falls in durable and recreational spending. We expect GDP to contract significantly in the June quarter due to lockdown effects. 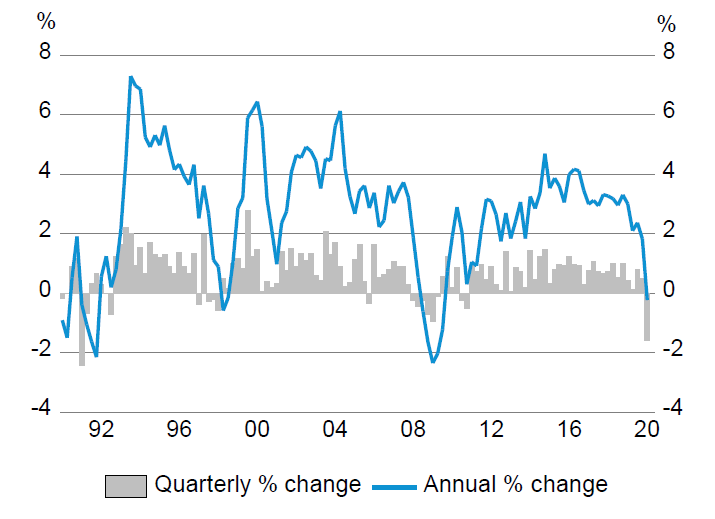 The annual current account deficit narrowed to $8.5bn (2.7% of GDP) in the March 2020 quarter, driven by a narrowing merchandise trade balance. Goods exports improved due to higher commodity prices and volumes holding up. Imports fell sharply, driven by lower demand and global supply chain disruptions. The services balance fell by $83m (7.8%) in the quarter due to travel restrictions and the subsequent border closure as well as lower international student arrivals. The net international investment position weakened by $10.1bn as a result of declines in global equity markets.

Dairy prices rose 1.9% at this week's GlobalDairyTrade auction, with WMP prices up 2.2% and SMP prices up 3.1%.

Retail spending in the United States (US) rose by a record 17.7% in May, following record declines during March and April (Figure 5). The level of retail sales remains 6.1% lower than during the same period last year, but the increase in May was well above market expectations (8%). The improvement in May was driven by higher sales of motor vehicles and parts, which rose by 44%. Industrial production also rebounded in May, but the 1.4% increase was below market expectations and remained 15.4% below its pre-pandemic level in February. Manufacturing production rose by 3.8% in May, with most industries posting increases. 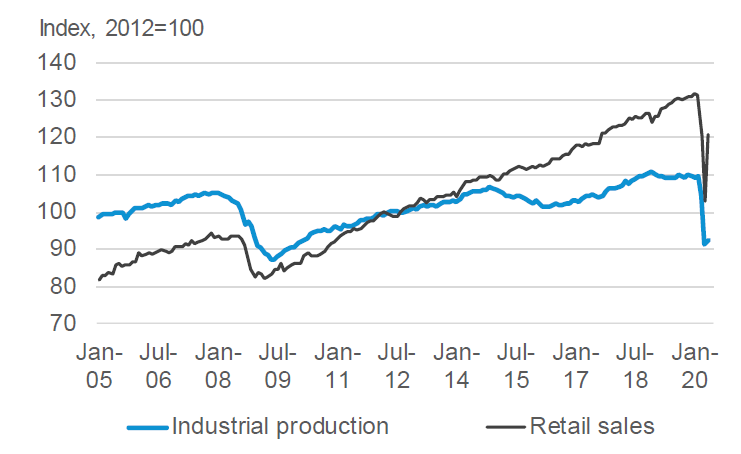 Australian employment falls further in May…

Seasonally adjusted employment declined by a further 227,700 people in May, bringing the total decline in April and May to 835,000 (a fall of around 6.4%). Unemployment increased by 85,700 people to 927,600, and the unemployment rate increased by 0.7 percentage points to 7.1%. As in April, the effect on the unemployment rate was moderated by a further decline in the labour force participation rate. Analysts now expect the unemployment rate to peak at around 8%, compared to previous expectations of 10%. Monthly hours worked fell by 0.7% in May and are down 10.2% since March. Payrolls data released earlier in the week showed that wages declined by a cumulative 8.3% between 14 March and 30 May, broadly consistent with the reported decline in employment.

The ANZ-Roy Morgan Australian Consumer Confidence Index continued to improve in the week up to 14 June, rising by 0.5 pts to 97.5, still well below average. ‘Time to buy a household item' rose by 1.3%, compared to a decline of 5.7% in the previous reading. Overall, economic conditions continue to be mixed, with ‘current economic conditions' gaining by 2.6%, while ‘future economic conditions' declined by 2.6%.

Industrial production increased in May, but was below market expectations, reflecting that the recovery may be slower than expected. Industrial production rose by 4.4% in annual terms (Figure 6). Retail sales fell by 3% over the year to May, compared to a 7.9% decline in the year to April, but were 0.8% higher than the previous month. Meanwhile, Chinese authorities have described the new outbreak of COVID-19 in Beijing as “very severe” and tightened controls, closing businesses and schools and cancelling more than a thousand flights in and out of the city. 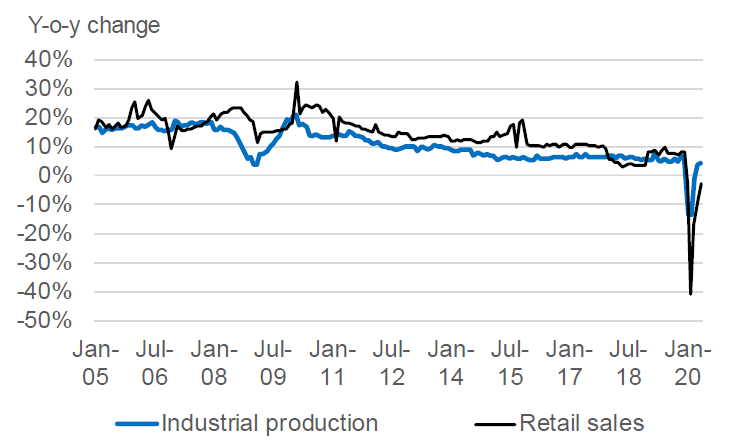 Risk-on sentiment returned to financial markets this week on the back of some solid economic data and the US Federal Reserve's opening of its previously announced main street lending programme to buy the secondary debt of US corporates. Markets seemed initially unperturbed by a new outbreak of COVID-19 in Beijing, a resurgence in new cases in some southern US states, and an intensification of geopolitical tensions. However, sentiment turned on Wednesday due to continued increases in COVID-19 cases, and as Beijing's alert level was moved to its second-highest level.