GDP rebounded by a record 14.0% in the September quarter, to be 0.4% up on the same quarter last year. On an annual basis, real GDP was 2.2% down on last year. The current account returned to deficit as imports recovered, and Treasury’s Half Year Economic and Fiscal Update pointed to an improving economic outlook. House prices continue to increase, supporting consumer confidence, and dairy prices remained buoyant. Manufacturing indicators remain strong, although services activity slowed.

European governments are tightening restrictions as the COVID-19 virus continues to spread, further dampening prospects for growth in the near-term, although incoming data suggests that firms there are adapting, and the effects of the measures may not be as severe as expected earlier. In contrast, China remains on track for around 2% growth this year. In Australia, the labour market recovery continued, and the Government’s fiscal deficits forecast were revised down slightly.

The Treasury released its Half Year Economic and Fiscal Update (HYEFU) on Wednesday. Although the contraction in June quarter GDP was the sharpest on record, it was less severe than expected, suggesting that the effects of alert level restrictions on economic activity are smaller than previously assumed. The HYEFU forecast was for a strong recovery in the September quarter, despite a return to higher alert levels during August and September (Figure 1). 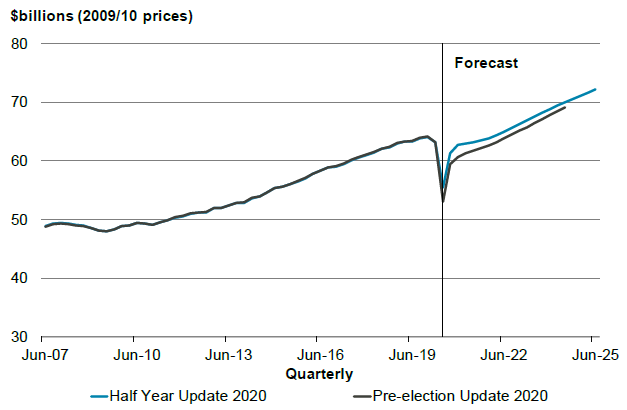 September GDP rebounds by a record 14%

Real production GDP bounced back by 14.0% in the September quarter, following a revised 11.0% fall in the June 2020 quarter, resulting in the strongest quarterly growth in GDP on record. The quarterly rebound was larger than our HYEFU forecast of a 10.5% consistent with high frequency indicators surprising on the upside since we closed our forecasts in late November.

Services industries rose 11.1% in the quarter, following a 9.8% fall in the June quarter while goods-producing industries grew 26.0% and primary industries were up 4.6% following falls of 15.9% and 7.1% respectively. The industries which contributed the most to quarterly growth included retail trade and accommodation (up 42.8%), construction (up 52.4%) and manufacturing (up 17.2%). Transport, postal and warehousing rose by 16.0% after falling 39.0% in the June quarter, but remains 19.3% lower than in the year to September 2019, reflecting the impact of reduced air travel.

Income support numbers rose for the second week, again driven by the seasonal increase in Jobseeker Support (JS). JS numbers rose by 1,115 in the week ended 11 December, bringing the total to 206,268 or 6.6% of the estimated working-age population. Of the 2,542 cancellations of JS in the week, 1,826 were due to obtaining work.

The number of people receiving the COVID-19 Income Relief Payment (CIRP) fell by 717, with 44 people cancelling due to obtaining work. Of the 3,924 grants for JS during the week, 244 had transferred from the CIRP. Total income support numbers, including JS and the CIRP, increased by 400 to 210,537 (see Domestic High-frequency Indicators).

The BNZ-BusinessNZ Performance of Manufacturing Index (PMI) picked up in November, rising by 2.9 points 55.3, the highest level of expansion since July. Production and new orders both rose, up 3.4 points and 4.8 points respectively. Employment eased, down 0.9 points in the month, but remains in expansionary territory.

The November REINZ House Price Index was up 15.3% on a year ago and up 3.0% over the month. Auckland house prices rose by 16.2% over the year and the prices in the rest of the country rose by 14.5%. House prices continue to be supported by a combination of limited inventory, strong demand and accommodative monetary policy.

Despite continued low inventory levels, total house sales in the year to date in November 2020 were 6.6% higher than the same period in 2019. The housing market has been stronger than expected in recent months with no signs of slowing yet, which places upside risk to our forecasts.

Consumer confidence rose by 10.9 points to 106 in the December quarter according to the Westpac McDermott Miller Consumer Confidence survey. The survey showed a strong lift in spending on entertainment activities as we head into the holiday season. The index is now just below its long run average.

The services balance was resilient…

The services balance was more resilient than we anticipated, recording a quarterly surplus of $0.5 billion (seasonally adjusted) as services exports rose and imports fell.

On the goods side, a rebound in goods imports returned the quarterly goods balance to deficit and drove the overall current account back into deficit following the record surplus in the previous quarter.  Goods exports were little changed from the same quarter a year ago, but imports were about $2.5 billion lower. 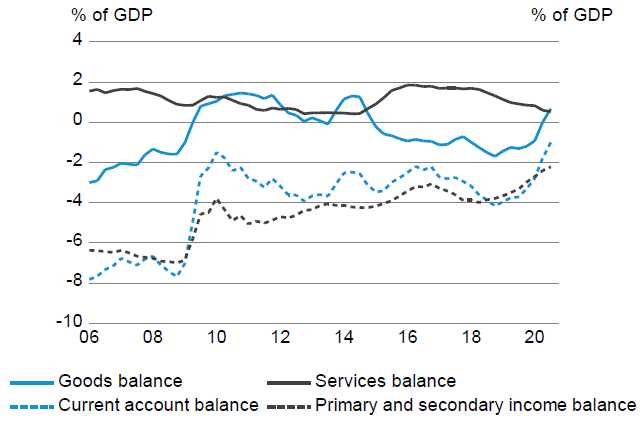 …and dairy prices held up at auction

European governments are tightening restrictions as the COVID-19 virus continues to spread. These measures will drag on growth and employment through the remainder of this quarter and into next year. However, December manufacturing and services indicators for the euro area and the UK did not fall as much as analysts expected, suggesting that activity is adapting quickly and that the economic costs of recurrent restrictions may be less than expected.

Meanwhile, the European Commission’s €1.8tn budget, including a €750bn coronavirus recovery package, has been agreed. The fund, a mixture of grants and loans, will start paying out in the second half of next year. Leaders also approved the new climate goal to reduce emissions by 55% by 2030 compared to 1990. Separately, the European Central Bank unveiled more stimulus for the eurozone economy. It is increasing its bond-buying programme by €500bn to provide more cheap funding for commercial banks and extending the length of its emergency measures.

Another Brexit deadline came and went, with parties agreeing to keep talking, amidst reports of a compromise. In the US, a 1.1% fall in November’s retail sales has increased pressure on US politicians to agree a stimulus package, while the Federal Reserve announced that it would maintain the current pace of bond purchases until the economy recovered further.

The Australian labour market continued its rapid recovery in November, driven by the easing of public health restrictions in Victoria. Employment rose 0.7% (90,000), consolidating October’s 1.4% rise. In level terms, employment is 1.1% below its pre-virus peak in February. Consistent with the rise in employment, hours worked rebounded 2.5% in the month, to be 1.5% below their pre-virus peak. 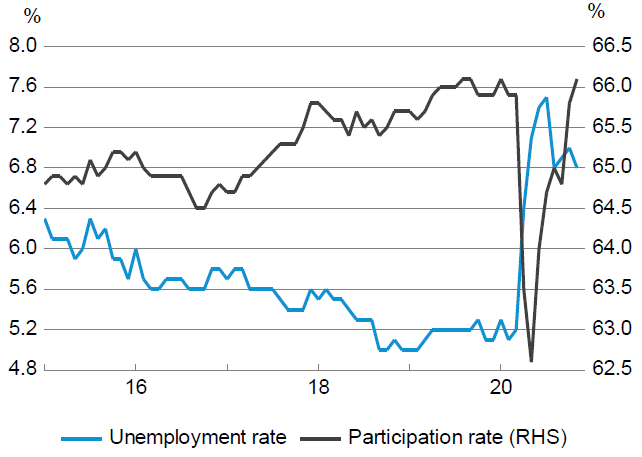 GDP growth for 2020/21 was upgraded to 0.8% from -1.5%, and 2021/22 is expected to be 3.5%, down from 4.8% previously, which lowered the expected costs of the JobKeeper wage subsidy scheme and raised tax receipt projections. In terms of policy, the MYEFO included additional expenditure on aged care, extension of the Coronavirus Supplement payments and additional vaccine funding.

China reportedly banned Australian coal imports, worth AUD$14bn, while allowing increased purchases from other suppliers as it moved to combat rising coal prices. Coal is Australia’s second largest export, with shipments to China equivalent to about 1% of GDP. 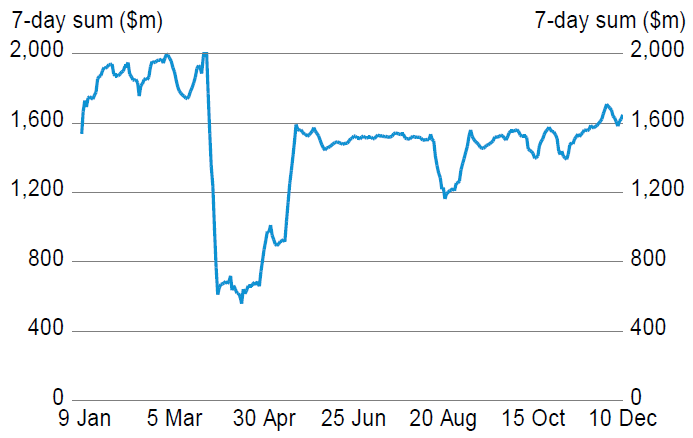 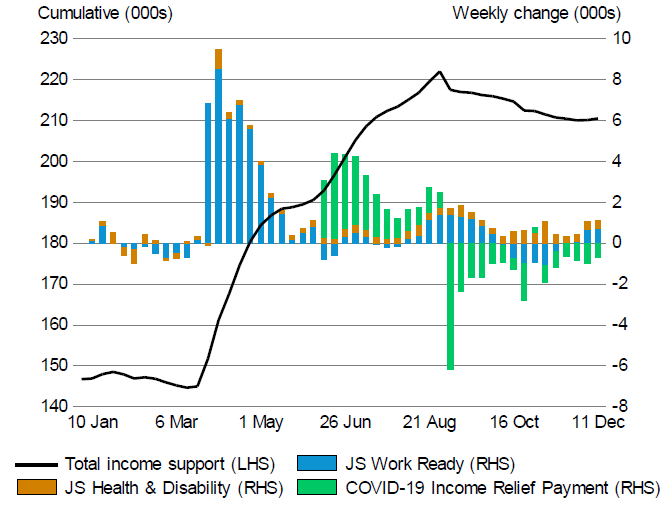 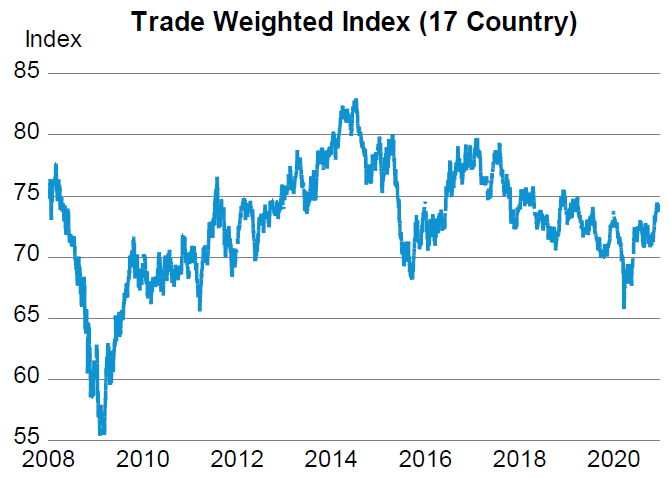 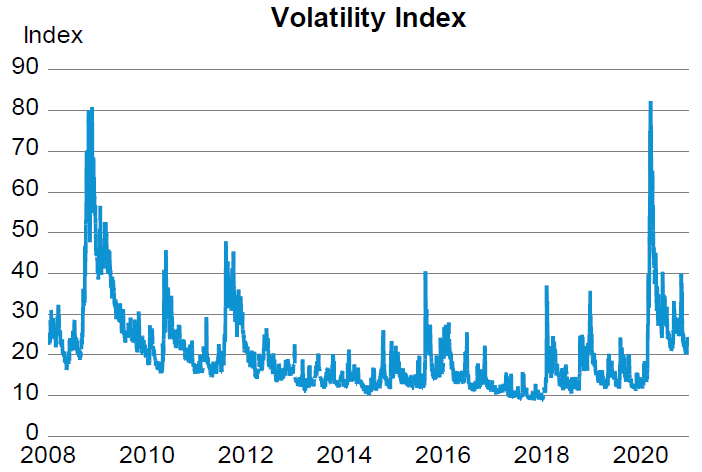 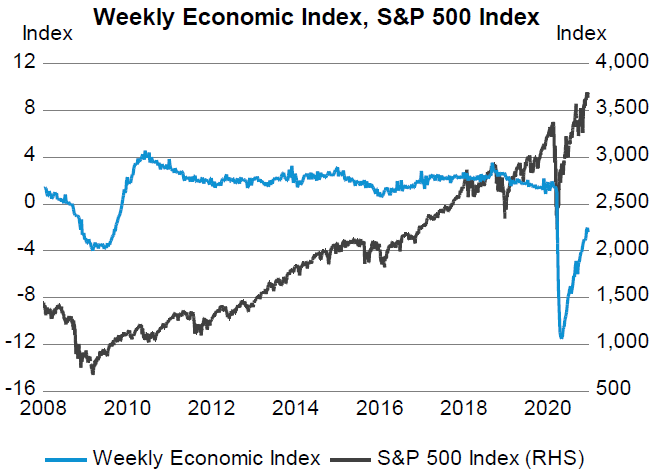 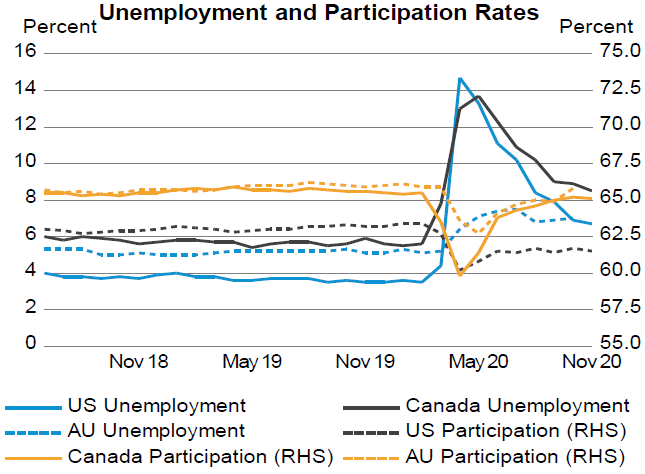