COVID-19 has resurfaced in the New Zealand community, and Alert Levels 3 (in Auckland) and 2 (in the rest of NZ) have been reinstated. Weekly growth in income support numbers increased for the first time in six weeks. The NZ Activity Index shows economic activity was above 2019 levels in July, as retail card spending held up strongly. The RBNZ expanded the size and duration of its Large-Scale Asset Purchase programme, while business confidence slipped. Food prices rose on the back of higher vegetable prices.

Economic data releases from the United States (US) have continued to beat market expectations. In the United Kingdom (UK), the unemployment rate remained flat in the June quarter, but hours worked fell sharply, and GDP declined by more than 20% in the June quarter. In Australia, there were large falls in both business and consumer confidence. Globally, risk assets have performed well over the past week on the back of stronger than expected economic data.

After 102 days without a case of COVID-19 being locally acquired in New Zealand from an unknown source, the virus has resurfaced in the community. On Tuesday, four new cases of unknown origin were discovered in a South Auckland family. Thirteen new cases in the Auckland community were reported on Thursday, all of which were linked to those four family members. Total tests now exceed 500,000, around 10% of the population.

Auckland moved to Alert Level 3 on Wednesday, while the rest of the country moved to Level 2. All New Zealanders are required to practice physical distancing, and are encouraged to wear masks in public spaces. Anyone with flu-like symptoms is asked to get tested. Alert Levels are initially in place until midnight on Friday. If restrictions are extended, the Government has indicated that further business support would be considered.

Activity rises above 2019 levels in July…

The latest NZAC value shows that activity in July was 2% up on the same month last year. Most constituent indicators are above 2019 levels. For example, electronic card transactions and traffic movements were about 5% and 10% up on July last year, respectively. The main exception is labour market indicators, including Jobseeker plus COVID-19 Income Relief Payment (CIRP) recipients and online job vacancies, which continue to drag on the index. In addition, the NZAC value for June was revised up from -0.9% in the previous release to 0.6%, due to a large positive revision in the light truckometer index value for June. Around 22,000 people were receiving the CIRP as of 7 August, an increase of 1,000 on the previous week. The number of Jobseeker Support recipients increased by 600. The total number of people receiving income support (Jobseeker and CIRP) was 215,000 - up 1,600 on the week prior. The weekly growth in income support numbers increased for the first time in six weeks.

The Reserve Bank Monetary Policy Committee (MPC) increased their Large Scale Asset Purchase (LSAP) programme up to $100 billion (from $60 billion) and extended its duration from 12 to 22 months, to further lower retail interest rates. The eligible assets remain the same and the official cash rate remains unchanged at 0.25% in accordance with guidance issued on 16 March. They also indicated that a package for additional monetary instruments is being prepared for use if the need arises. These tools include a negative OCR, funding retail banks directly at near-OCR and purchases of foreign assets.

The RBNZ said that, despite spending and employment holding up better than expected, significant global risks persist and there remains a downside risk to their baseline economic scenario.

Preliminary data from the early-August ANZ Business Outlook adds to the evidence that the post-lockdown rebound may be over. Business confidence deteriorated by 10 points to -42.4% while own activity dropped 8 points to -17%. A net 15% of firms expect to reduce investment (an 8 point deterioration), and a net 32% expect lower profits (a 5 point fall). However, capacity utilisation improved by 5 points to -3%. Near-term employment intentions fell 6 points to a net 21% of firms expecting to cut jobs with the same net percentage reporting having fewer staff compared to last year. One-year-ahead inflation expectations fell slightly although expected costs and pricing intentions made small gains. While the increased spending on likely reflects pent-up demand following lockdown, a preference for using cards over cash may also be contributing to growth in electronic card spending. 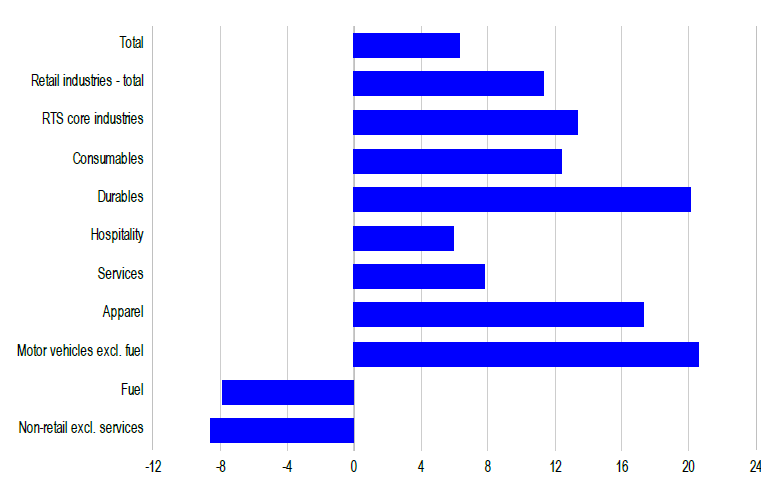 Seasonally adjusted food prices rose 0.6% in July, driven by a 7.7% increase in fruit and vegetable prices as imports of courgettes and cucumbers from Queensland were banned for biosecurity reasons. These increases were partly offset by a 1.2% fall in grocery prices, led by cheaper dairy products. Compared to July 2019, prices were 4.2% higher.

The provisional estimate of net migration for the months of April May and June 2020 was zero, 400 and 500 respectively owing to border and travel restrictions. Provisional estimates for the year ended June 2020 show annual net migration at 79,400 with three-quarters of this gain coming in the six months leading up to the introduction of travel restrictions. Changing travel patterns are impacting the estimation of net migration for the most recent periods, with the most recent 6 months data potentially prone to revisions as further information becomes available.

Economic data releases from the United States (US) have continued to beat market expectations. Initial jobless claims have continued declining, reaching 1.2 million - the lowest level in the COVID-19 period. Market expectations had been for a figure of above 1.4 million. Prior to COVID-19, initial claims were in the region of 212,000. Continuing claims (those who have collected unemployment benefits for at least two consecutive weeks) fell by 844,000, but still remain elevated at 16.1 million. Non-farm payrolls for July also beat expectations, rising by 1.8 million and the unemployment rate fell from 11.1% to 10.2% (Figure 5). However, the level of employment remains 8.4% below what it was in February, the duration of unemployment is rising for many, and the participation rate remains low. Republicans and Democrats have yet to agree on new fiscal stimulus, prompting the president to partly renew expanded unemployment benefits and suspend some payroll taxes by executive order. There has been some good news on the COVID-19 front, with hospitalisations and deaths slowing. However, total confirmed cases have increased by a million in the last two weeks, and some regions continue to report rising case numbers.

The unemployment rate in the United Kingdom (UK) was surprisingly flat in the June quarter at only 3.9%. The true state of the labour market is however being obscured by measurement issues as well as the government's job-retention schemes. Indeed, actual weekly hours worked fell by a record 18.4% (191.3 million) on a quarterly basis in the three months ending June. This was the steepest quarterly decline since estimates began in 1971, bringing total working hours to a level last since in November 1994. Average actual weekly hours fell by a record 5.6 hours to a record-low 25.8 hours.

The UK's GDP fell by 20.4% in the June quarter compared to March, the steepest quarterly decline on record, and worse than other developed economies who have reported GDP data for the quarter. In the March quarter, UK GDP fell by 2.2%. A recovery is under way, with monthly GDP data showing an increase of 8.7% in June, following a 1.8% increase in May. However, high-frequency indicators such as electricity use and credit card spending remain well below pre-pandemic levels.

The National Australia Bank (NAB) business confidence index deteriorated in July to -13.9 following an improvement in June. However, the business conditions index increased from -7.7 to 0.3. With the exception of Victoria, business conditions have improved to be broadly on par with pre-COVID-19 levels. The fall in confidence levels is a worry, especially as it came even before the announcement of tighter restrictions in Melbourne, suggesting that there will be a further decline in confidence in August. Business confidence levels in July were the weakest among retail and construction firms. The Westpac-Melbourne Institute Index of Consumer Sentiment fell from 87.9 in July to 79.5 in August, close to the level recorded in April (75.6) when the country went into national lockdown. Surprisingly, consumer sentiment fell by more in New South Wales (-15.5%) than in Victoria (-8.3%).

Risk assets have performed well over the past week or so on the back of stronger than expected economic data as well as news that US President Trump is considering tax cuts on capital gains. The S&P500 is hovering near its all-time high reached in February this year. The US producer price index (PPI) for July increased by more than expected and by the quickest pace since October 2018, further fuelling inflation expectations, which put upward pressure on US bond yields. The US 10-year Treasury Note Yield has risen from a low of 0.52% recorded last week to above 0.6%, while the implied 10-year inflation rate remains above 1.6%. 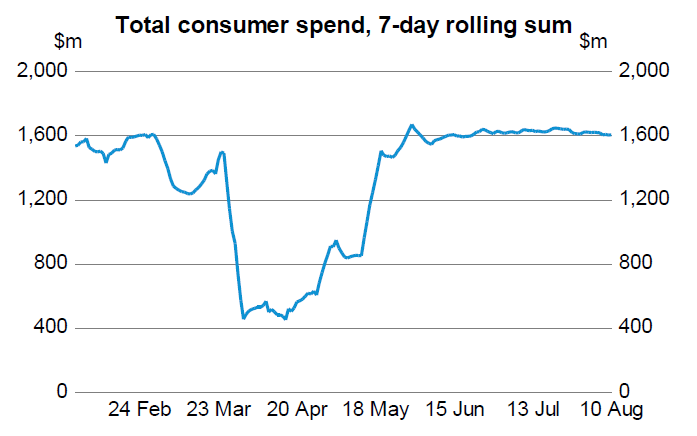