The increase in income support payments from July, strong wage growth, low interest rates, rising house values and a lack of overseas travel options are all likely be supporting spending. We expect spending to remain robust in the near-term.

Housing market activity continued to show resilience since changes were made to tax and lending rules earlier in the year. Prices rose 1.9% in the month to be up 30.6% from a year ago in July - a fresh record high growth rate (Figure 1). However, the 3-month moving average of monthly house price growth has been tending down since January, suggesting a slowing in the rate of growth in house prices. Demand in the housing market is likely to ease further with interest rates expected to rise over the year ahead, resulting in slower growth in house prices. Banks are expecting the Official Cash Rate (OCR) to rise by 25 basis points at the next review on the 18th of August. 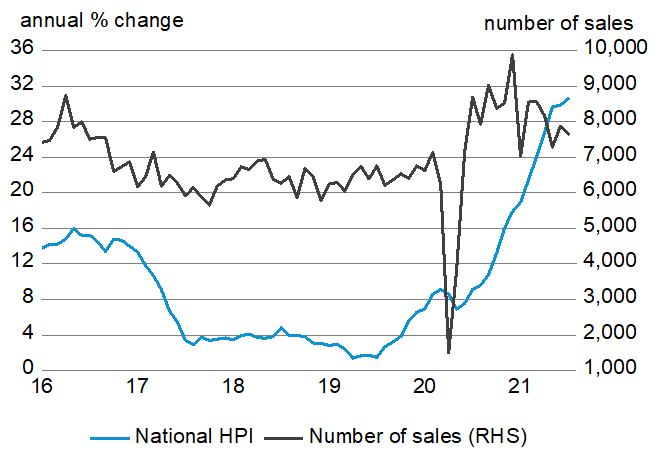 Sales activity has also been trending down since December 2020 but remains at an elevated level compared to previous years, which is expected to support consumption and investment over the quarters ahead. High sales volumes in recent months have coincided with near-record-low levels of inventory, and with days-to-sell falling to 31 (the lowest for a July month since 2016), reflecting a 'fear of not finding anything' dynamic according to REINZ. Sales activity is expected to ease as mortgage rates rise, pricing some buyers out of the market.

The Reserve Bank's Survey of Expectations for July showed that mean CPI inflation expectations rose to 3.02% (from 1.87% last quarter) in one years' time and 2.27% (from 2.05% last quarter) in two years. Expectations for the OCR have also increased significantly, following the higher-than-expected CPI outturn for the June quarter. Mean OCR expectations rose to 0.4% for one quarter ahead and 1.02% for one year ahead. All survey participants expected to see at least one rate hike in the next twelve months and most expected to see two to five rate hikes over the next year.

Compared to the previous quarter, respondents had higher expectations for house price growth one year ahead, but slightly lower expectations two years ahead. House prices are expected to rise by 6.74% in the next 12 months and 4.15% per annum over the next two years.

The BNZ-BusinessNZ Performance of Manufacturing Index (PMI) showed that activity in the sector lifted again in July to 62.6, up 1.7 points from June, and close to its record of 63.6 in March. Employment (58.3) recorded its highest ever result over the history of the survey. An increasingly tight labour market, supply chain issues and raw material costs remain particularly problematic for manufacturers.

US employment continues to recover...

July data on the US labour market were more positive than expected, with the unemployment rate falling to 5.4% as employment grew by over one million people (Figure 2). There was little downside in the data, with the underutilisation rate also falling as the participation rate edged up slightly. While there is still significant progress to be made, with 6 million fewer people employed compared to pre-pandemic levels, the data give cause for optimism as concerns build around the Delta variant's rise. 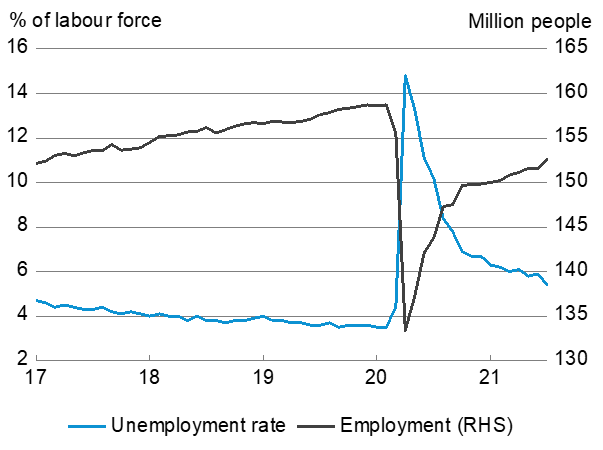 Annual US consumer price inflation remained elevated in July, holding steady at 5.4%, though monthly growth slowed (Figure 3). When excluding food and energy, prices grew by 0.3% in the month, a significant slowdown compared to prior months. While the relatively subdued CPI inflation gives credence to the Federal Reserve's view that high inflation is transitory, rising producer price growth suggests that inflationary pressures may continue. 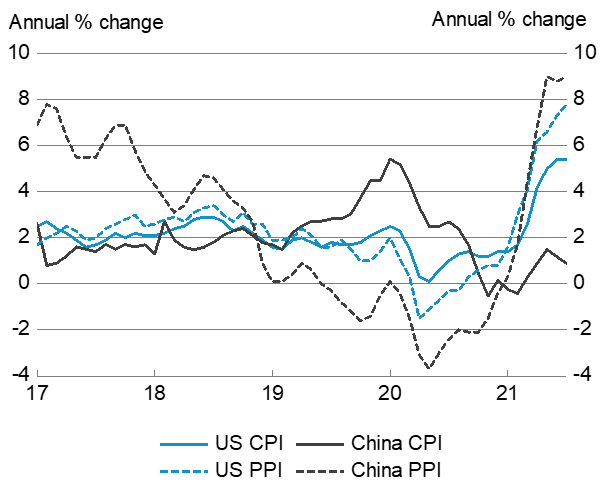 In China, annual consumer price inflation remained subdued, falling to 1.0% in July. Weakening prices were largely driven by falling food prices - when excluding these, annual price growth showed more momentum, rising to 2.1%. Producer price growth remained high, though this has not appeared to have had a major impact on consumer prices.

Australia's business confidence index declined sharply in July, falling 19 points to reach below zero for the first time this year (Figure 4). The fall was largely driven by New South Wales as the effects of a full month of lockdown were felt, though declining confidence was widespread across most states and industries. The index did not approach the lows seen in March and April 2020, providing hope that confidence can recover relatively quickly once restrictions are eased. 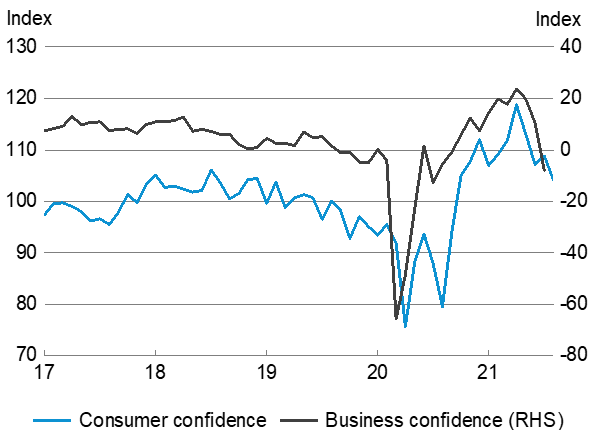 Consumer confidence also took a hit, falling in August to the lowest level since September 2020. The drop was more moderate than expected, suggesting a degree of assurance among consumers that the pandemic will be brought back under control and economic growth will return.

...and GDP growth rebounds in the UK

The UK economy expanded 4.8% in the June quarter compared to the March quarter, driven by strong growth in private consumption, bringing GDP to 3.3% below pre-pandemic levels. The easing of restrictions should drive further growth in the September quarter, though the sharp rise in COVID-19 infections may limit economic activity. 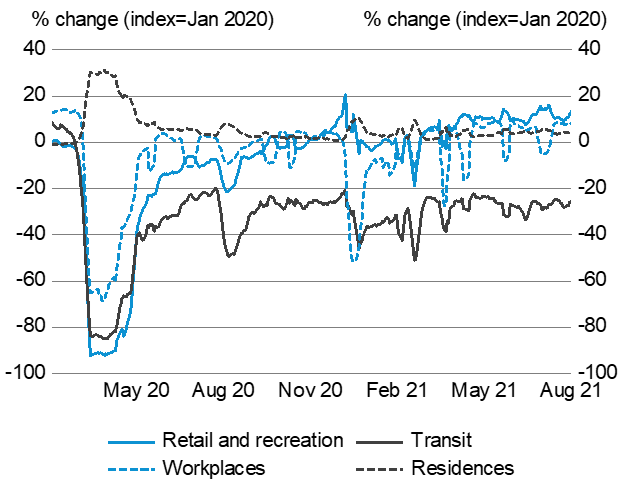 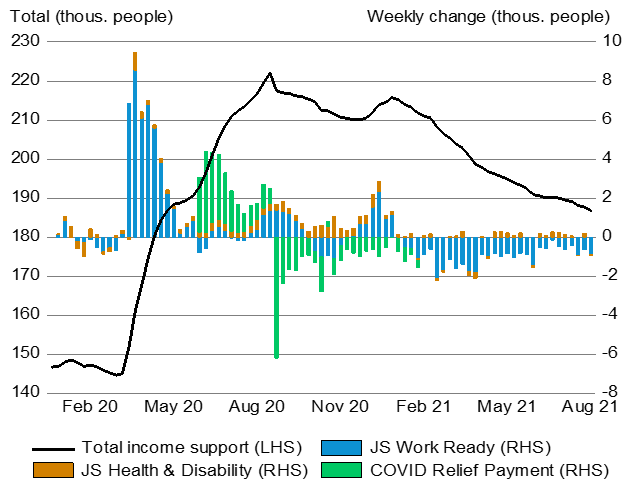 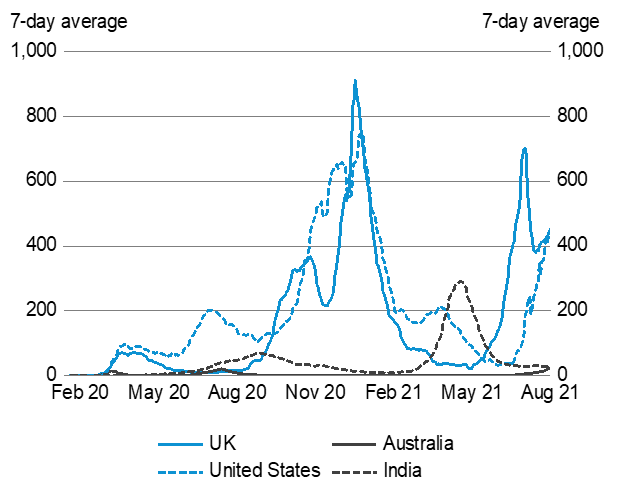 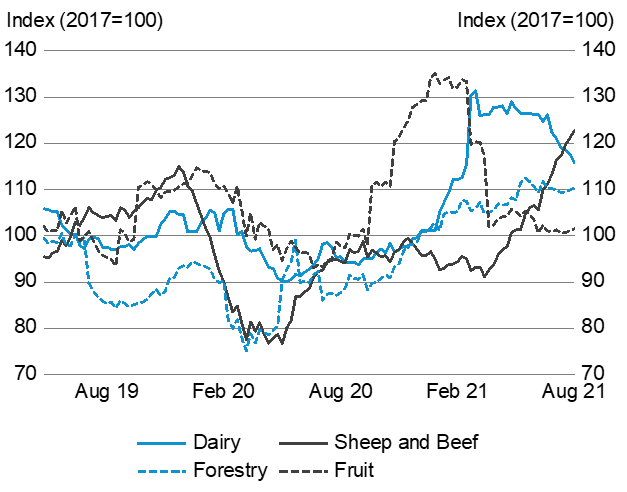