In this last Weekly Economic Update (WEU) for 2021, partial indicators of GDP show that economic activity fell substantially following the delta-outbreak and subsequent restrictions during the September 2021 quarter, with economists estimating a fall between 1% and 7% in September quarter GDP. We anticipate a near 6% decline. Since then, easing restrictions have allowed for at least a partial recovery in most parts of the country and the move to the COVID-19 Protection Framework will likely be supporting activity further, combined with continued strength in commodity prices. This week's Special Topic discusses the expected fall in September 2021 quarter GDP in more detail. The WEU will resume in late January 2022.

The volume of building work put in place fell 8.6% from the June 2021 quarter following the delta outbreak and subsequent reimposition of higher Alert Levels in August. Both residential and non-residential construction activity experienced large falls, but these were not as severe as those experienced in the June 2020 quarter (Figure 1), given the shorter period under Alert Level 4 for most of the country. Residential investment is expected to remain elevated as the effects of the latest round of restrictions ease while consents issuance remains at record highs. Ongoing supply-side constraints will be working to constrain growth in activity however, with materials and labour shortages still major concerns for construction firms, which will be keeping inflationary pressures elevated.

…while other business activity was mixed …

Wholesale trade values rose 1.8% from the June 2021 quarter, driven by a 6.1% increase in the grocery, liquor and tobacco products industry. All industries recorded an increase in stock building, likely reflecting trading restrictions and adjustments to supply chain management during periods under higher alert levels.

…and commodity prices continued to rise

The ANZ World Commodity Price Index rose 2.8% in November, increasing further from its previous record high in June 2021. Dairy prices lifted a further 6.3%, from a month ago, with particularly strong increases for prices of butter and cheese. Aluminium prices fell 10.1%, reflecting rising uncertainty following the discovery of the new Omicron variant of COVID-19.

Dairy prices rose a further 1.4% from a fortnight ago at the latest GlobalDairyTrade auction, taking prices to their highest level since 2014, and suggests the goods terms of trade will remain well supported in the final quarter of 2021 (Figure 2). Earlier this year, Fonterra raised and narrowed its farmgate milk price range to $7.90-$8.90 per kilogram of milk solids for the 2021/22 season, with the $8.40 midpoint matching the previous record high set in 2014. 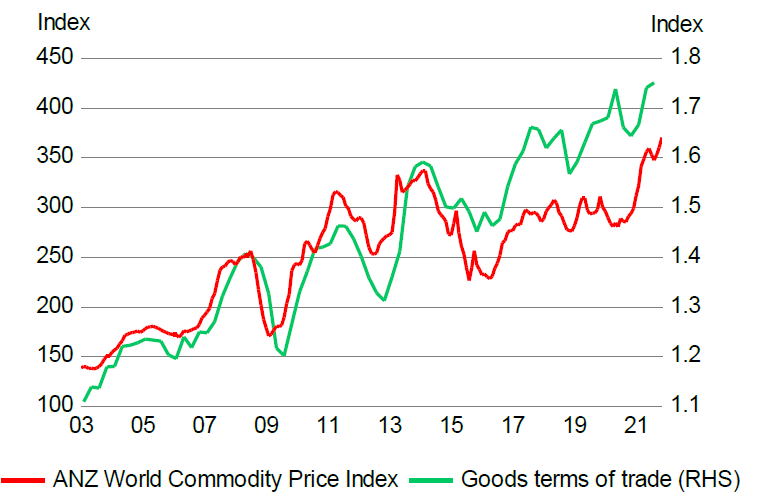 Labour market reports in the US presented mixed messages, though other data indicate a tight labour market, increasing the likelihood of a faster tightening in monetary policy. The services sector appears to be recovering strongly in the US, and spending in the euro area remained steady, though the Omicron variant continues to raise uncertainty.

US labour market data for November were mixed, with the two surveys of employment telling two different stories. While the Establishment Survey (which collects payroll data from employers) showed the weakest growth in employment all year, the Household Survey showed both employment and labour force participation growth picking up pace (Figure 3). This brought the unemployment rate down to 4.2%, though the rate would be much higher if labour force participation had recovered to the same extent as employment. 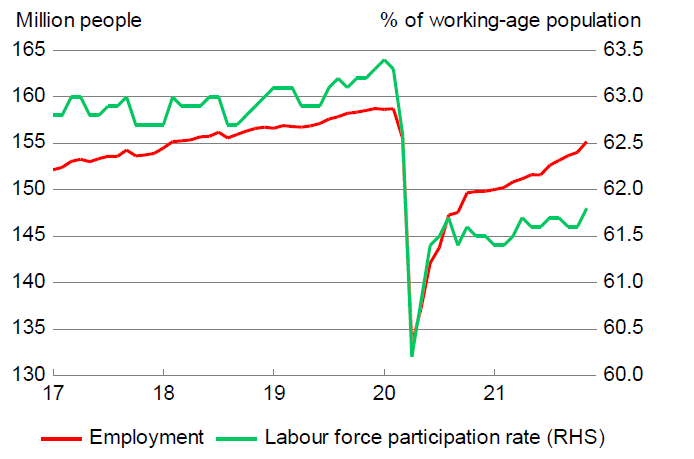 With employment in both surveys still well below pre-pandemic levels, the US Federal Reserve will be considering the reports carefully to determine which is a better signal of momentum in the labour market. If the Household Survey is thought to be closer to the truth, and today's Consumer Price Index (CPI) data show annual inflation continuing to rise, then a faster tapering in monetary support would appear highly likely.

The US Job Openings and Labour Turnover Survey for October showed job openings rising to only slightly below the record high set in July, indicating strong demand for labour. The quits rate also remained elevated, suggesting that workers are taking advantage of the tight labour market to find higher-paying jobs. This points to ongoing upward pressure on wages, possibly adding further fuel to rising CPI inflation.

…and services activity is recovering

The Institute for Supply Management (ISM) services index reached a record high in November, indicating a strengthening recovery in services activity in the US (Figure 4). The transition in consumer demand from goods back to services appears to be under way, which may help to ease upward pressure on consumer prices. 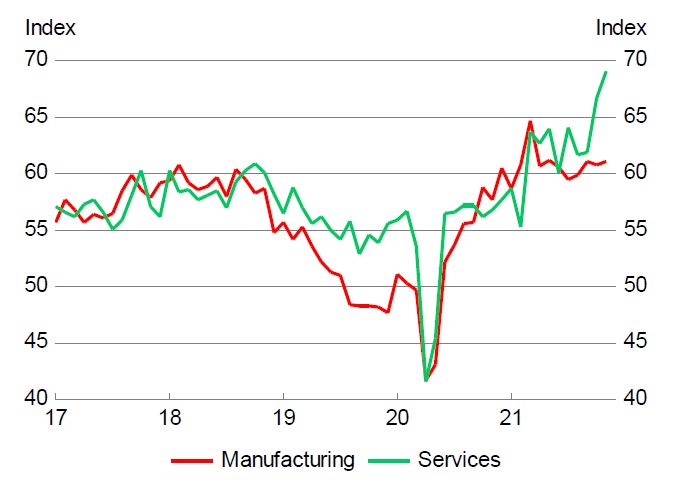 Consumer spending remained strong in the euro area in October, with retail sales rising 0.2% in the month. The spread of COVID-19 has since intensified in Europe, with a number of countries reintroducing restrictions, suggesting that the boost given to GDP by consumer demand will fade over the rest of the December quarter.

…while uncertainty around Omicron continues

The spread of the Omicron variant of COVID-19 has been significantly faster in South Africa compared to Delta, though hospitalizations and ICU admissions appear to be much smaller as a proportion of cases. This could reflect either a less severe form of the virus or protection from vaccines. Recently published results from Pfizer indicate that a third dose of their vaccine is necessary for full protection against Omicron, though the company stated that a strain-specific vaccine could be required and would be ready by March. Markets continue to be volatile as uncertainty around the variant continues, though most of last week's losses have been recovered.

GDP fall of around 6% owing to Delta…

The emergence of the Delta variant of COVID-19 in the community in August and related shifts to higher Alert Levels over August and September significantly impacted on economic activity.

We predict that real GDP likely recorded its second largest quarterly decline, falling by around 6% in the quarter. This is only beaten by the June 2020 quarter decline that resulted from the initial COVID-19 lockdown when GDP fell 9.9%. 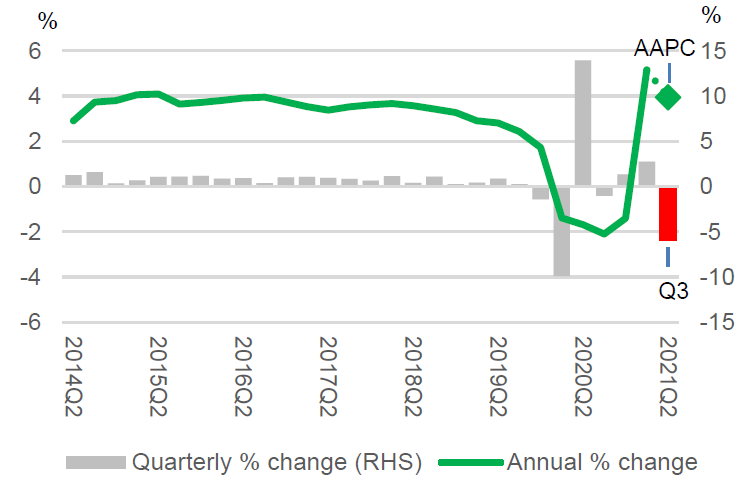 Uncertainty around this pick is high - a result a couple of percentage points either side (i.e., in the 4% to 8% range) would not be that surprising.  The September quarter was very much one of two halves, with the Delta impact occurring in the second half.  These timing differences will complicate measurement with a potential risk that more of the impact shows up in the December quarter relative to what we have assumed.

On balance, the various business-focussed data released yesterday tilt risks towards the less negative side of the range above.

Services industries are most affected...

Public-facing services industries such as retail and accommodation, transport and arts and recreation services are most impacted given the COVID-19 restrictions in place, with large falls apparent in September quarter retail sales. Reductions in the movement of both people and freight (see high frequency charts) have adversely impacted on the transport industry.

… but most industries will experience falls

Building work put in place, down 8.6% in the quarter, provides evidence of a sizable reduction in the construction industry as building sites were shut for some of the period and supply constraints for some materials affected activity. Agriculture, forestry and fishing will be less affected but lower milk production and reduced forestry harvesting during lockdown is likely to still mean a reduction in industry GDP.

Wholesale trade appears to have performed better than expected with sales up 1.8% in nominal terms suggesting fairly flat industry GDP once price movements are allowed for. This contrasts to the June 2020 quarter lockdown when both sales and industry GDP fell by around 12%.

The fall in retail trade is indicative of a smaller fall in private consumption as some components of GDP such as housing consumption will have been much less affected. Similarly, the decline in residential construction will be reflected in a decline in residential investment, while lower non-residential building will contribute to falling business investment. Both falling exports and rising imports will subtract from GDP in the quarter and also contribute to a widening current account deficit.

The annual current account deficit is expected to have widened to 4.7% of GDP in the September quarter, owing to a surge in goods imports and ongoing weakness in services exports pulling down the goods and services balances. The deficit will likely continue to widen over the next few quarters as rising interest rates drag on the income balance, though the return of international visitors should support a recovery in the current account balance from the second half of next year.

We expect that COVID-19 restrictions will have less of a negative impact on the December quarter. Next week's Half Year Economic and Fiscal Update will indicate how we expect further recovery as we move into 2022. 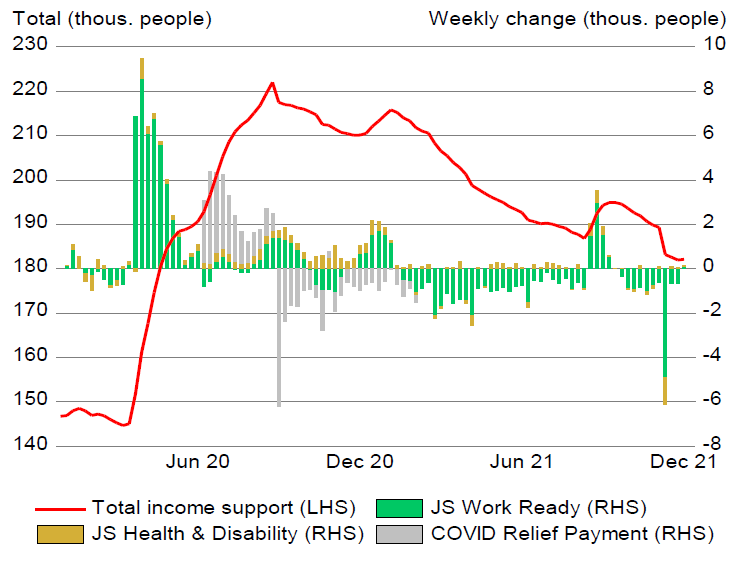