The measurement of New Zealand's productivity and capital 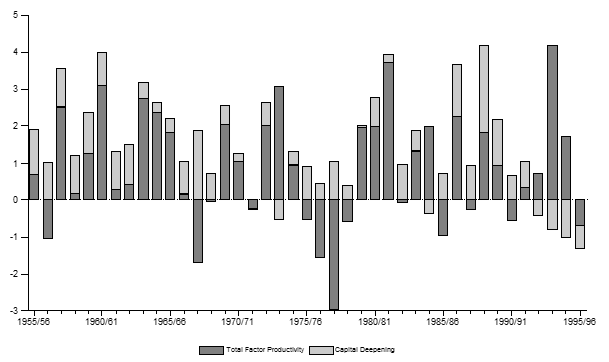 Around the time of the magic bus paper I was reading The Little Yellow Digger to my children.[2] This popular New Zealand children's book provides an early introduction to the importance of physical capital. Importantly, it indicates that the measurement of capital needs to allow for the fact that not all diggers are created equal. And diggers are different from trucks. The most appropriate measure of capital depends on the purpose of the analysis.

The 1996 paper provided context around the Treasury's short- and medium-term views of productivity growth. It did this by using growth accounting – one version of which identifies how much growth in labour productivity is owing to increases in capital per worker, and how much is owing to improvements in the use of labour and capital (total factor productivity). See the chart from the 1996 paper below (it's monochrome because we tended not to print in colour back then).

From a measurement perspective, some things have changed significantly since the 1996 paper. That analysis was unofficial and used capital stocks estimated by the Treasury. Since 2006, Statistics New Zealand has published official productivity statistics based on OECD guidelines. In 2017, Statistics New Zealand published its first set of Annual Balance Sheets (ABS) for the period 2007 to 2015. These balance sheets bring together various data sources to provide a more coherent picture of the assets and liabilities of the economy. In 2018, Statistics New Zealand published accumulation accounts that explain the movement in values from one balance sheet to the next in terms of transactions, price movements (revaluations) and unanticipated volume changes (eg, loss of assets in a natural disaster). 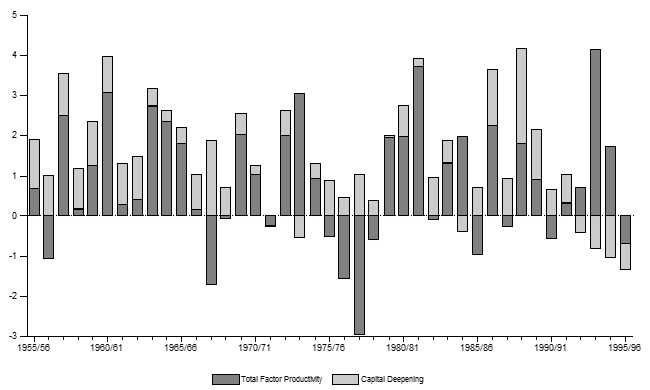 Yet some things remain the same. The 1996 paper noted challenges in measuring productivity in the services sector and the increasing role of information technology. In the late 1980s Robert Solow had remarked that "You can see the computer age everywhere but in the productivity statistics". Measurement issues arising from the "digital economy" are still with us and are a suspect in the current debate regarding the slowdown of aggregate productivity growth across many economies.[4] Perhaps the biggest analytical change since 1996 has been the growing use of micro-data to understand productivity at the level of the firm. The New Zealand Productivity Commission has made extensive use of firm-level analysis.

How we measure financial and physical capital is an important dimension of the Treasury's Living Standards framework. The Treasury has released a number of discussion papers on the measurement of the four capitals in that framework (human, natural, social, financial and physical). One of the discussion papers released in July – The start of a conversation on the value of New Zealand's financial/physical capital – examines various indicators for the purposes of a Living Standards Dashboard. The paper looks at alternative definitions, the gaps relative to indicators proposed by the Organisation for Economic Cooperation and Development (OECD), and the measurement of capital itself.

The paper looks at potential indicators using two broad perspectives. The first is the Annual Balance Sheets mentioned above, which include individual sectors of the economy, particularly households. The second perspective relates financial/physical capital to the production of goods and services and hence material living standards. And this highlights the role of productivity.

The table below provides an updated growth accounting analysis along the lines of the 1996 paper. It does this using official statistics for the measured sector, which makes up around 80% of Gross Domestic Product (GDP). Multifactor productivity (MFP) growth is the residual of measured sector output growth and growth in labour and capital, both weighted by their share of income. In addition to the full 1996 to 2017 period, the analysis is undertaken for growth cycles. A growth cycle is defined as the years between the peak of one cycle and the peak of the following cycle. The current cycle (2008 to 2017) is incomplete. The use of growth cycles helps allow for factors that vary within a cycle, such as capacity utilisation of the capital stock.

Note: Years ended March. Each growth cycle excludes the change for the first year (eg, the 1997 to 2000 average annual growth rate does not include 1997).

For the period 1996 to 2017, average annual growth in labour productivity for the measured sector was 1.5%. Capital deepening (the difference between growth in capital inputs and labour inputs) averaged 1.6% per year over the same period.

The financial/physical capital discussion paper concludes that it is feasible to generate the OECD illustrative indicators, based on information from the New Zealand national accounts and other sources. However, the paper argues that a slightly different set of financial/physical capital indicators is appropriate for the Living Standards Dashboard. The proposed set includes: aggregate household net worth; the net international investment position; fixed and intangible assets; investment, including in research and development (R&D); and multifactor productivity.

The discussion paper also acknowledges the increasing role of intangible (or knowledge-based) capital and challenges around output measurement. These challenges have motivated calls for amendments to existing measurement frameworks and/or placing more weight on various capital stocks. The applicability of these measurement challenges to New Zealand is still to be fully assessed. By design, the Treasury's Living Standards approach considers a wide range of capitals. The extent to which the national accounts should be expanded to include a wider set of capitals would need to assess the primary purpose of the accounts, and whether estimates like GDP would be affected.