Between 3 March and 12 March 2021, officials from the Treasury met with a range of businesses and other organisations to discuss the outlook for the economy.

A number of businesses were more optimistic about the outlook than they had previously expected. There are some pressure points (for example the impact of reduced international tourism on provincial towns, and an ongoing skilled labour shortage), however supply chain issues are mostly being managed, and strong household spending and house price growth have supported the economic recovery.

The lack of international tourism is being felt across the country…

The effect of a lack of international tourism is being experienced throughout the country, in particular in areas more than a few hours' drive from population centres that have benefitted less from domestic tourism. Many tourism businesses are operating at reduced capacity or hibernating until international visitors return, and reported major job losses over the last year.

There is a reasonable amount of positive sentiment in luxury tourism and hospitality. However, a number of budget tourism and hospitality businesses are struggling. The West Coast and Queenstown Lakes District have been particularly impacted, as shown by the Regional Activity Indicator (see 26 February 2021 Weekly Economic Update). Some businesses reported that Managed Isolation and Quarantine has provided some relief by boosting hotel occupancy, particularly in Auckland.

While there is optimism that international tourists will return, some businesses worried about whether infrastructure will be fit for purpose relative to the speed at which tourism is expected to rebuild.

COVID-19-related uncertainty seems to be holding back growth in parts of the country, for example the upper and lower parts of the North Island. Changing alert levels has been a cause of concern for the tourism industry, with some businesses reporting product spoilage and fewer re-bookings following the most recent removal of restrictions compared to previous periods of higher alert levels, possibly suggesting a lack of consumer confidence.

Auckland has been particularly hard-hit by alert level changes, with a number of major events, cultural activities and businesses impacted. Some businesses reported government support has helped mitigate some of this effect, enabling the retention of permanent staff across venues.

The tourism industry has been impacted by border closures, and there was interest from businesses for greater certainty around the future of New Zealand's border settings. A trans-Tasman bubble was considered by many businesses as being key to their recovery, bolstered by the fact that Australians normally comprise a significant proportion of New Zealand's visitors.

Tertiary education has also taken a hit from border settings, with lost revenue and job losses reported, likely due to reduced numbers of international student arrivals last year, and similar losses are expected this year. This has been partly offset by a higher than normal number of domestic student enrolments. A flow-on economic effect is expected, due to students normally remaining in the country for several years.

…as does the need for skilled labour

Businesses across multiple sectors reported difficulty obtaining skilled labour. The construction industry is experiencing some delays, with project managers and builders proving difficult to find. Skilled labour is also in short supply for the agriculture and horticulture industry, as many of these skills are difficult to source domestically.

Some retail businesses are also finding skilled labour hard to come by, particularly in the areas of management and IT. Tourism businesses reported difficulty in obtaining IT-related labour, and there are concerns about whether enough tourism and hospitality workers will be available once the borders re-open, as a large number of people who were filling these roles have left the country.

Margins are being squeezed for some businesses…

Supply chain issues are adding to cost pressures for some businesses, with increased freight costs and product spoilage due to delays. Environmental regulations and increasing carbon credit costs were also cited as drivers of cost pressures. These factors may be reflected in recent measures of Business Confidence and Business Own Activity (Figure 1), which have fallen slightly in recent months.

Businesses reported expecting delays caused by global supply chain issues to persist until the end of the year, while domestic issues should be resolved by the middle of the year.

Figure 1: Business confidence and own activity 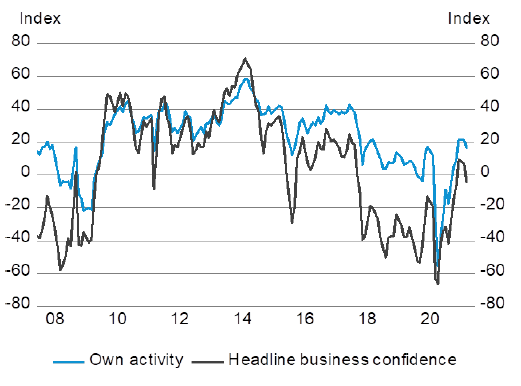 …though for some businesses, demand is strong

Construction continues to perform well, with newly built homes being sold more quickly than usual and plenty of work available.

Retail businesses reported strong durable goods and car sales, with supply chain disruptions proving manageable in this area and the popularity of online delivery holding up. The increase in spending on household goods and cars is likely a knock-on effect of reduced spending on international travel.

Consumer confidence has been increasing since the country came out of Alert Level 4 last year, however consumer confidence levels have not yet recovered to pre-COVID-19 levels. The ANZ-Roy Morgan Consumer Confidence Index remains below its historical average of 120 (Figure 2). 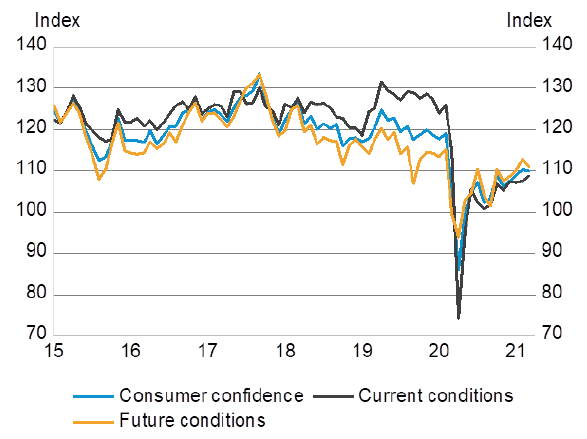