The economic effects of COVID-19, and the corresponding alert level restrictions and support measures that have been put in place, are now becoming clearer. Nevertheless, final impacts on GDP will only become known once National Accounts data have been reconciled through an annual supply-use balancing process, which will not take place for several years.

However, we now have more information available to refine our earlier estimates[1] of the economic impacts of the country (or portions of it) being at various alert levels.

Based on this additional data, we now estimate that less activity is lost at Alert Levels 1-3. These smaller impacts reflect a combination of earlier assumptions proving too pessimistic as well as the ongoing adapting of firms and households to the challenges of COVID-19.

Our overall assumptions of the Alert Level impacts used in the Half-Year Economic and Fiscal Update (HYEFU) 2020 were for impacts on economic activity (relative to “normal”) of:

These assumptions represented the combined impact on GDP of the presence of COVID-19 in New Zealand and abroad, as well as the various restrictions and support measures available at each alert level, including the approximately $14 billion paid in wage subsidies, leave support scheme and short-term absence payments over 2020.

These estimates were based on earlier assumptions made for our Pre-election Economic and Fiscal Update (PREFU) 2020, updated by detailed industry groups for the eventual June 2020 quarter GDP outturn (a record-breaking 11.0% decline) together with various high-frequency data such as traffic flows and electronic card spending.

During the June 2020 quarter the country spent four weeks at Level 4, two weeks at Level 3, and the remainder of the quarter spent evenly at Levels 2 and 1 (Table 1)[2].

Since then we have had additional periods of elevated alert levels…

Since preparing our HYEFU 2020 assumptions, we have had two additional quarters of GDP data released, with the September quarter rebounding 13.9% before losing some ground and falling 1.0% in the December quarter. We have also had additional data points available for the range of high frequency data that we used in our original assessment (Figure 1).

These new data pointed to smaller-than-anticipated reductions in the level of economic activity at Alert Levels 2 and 3, particularly over the time spent at higher alert levels during September. 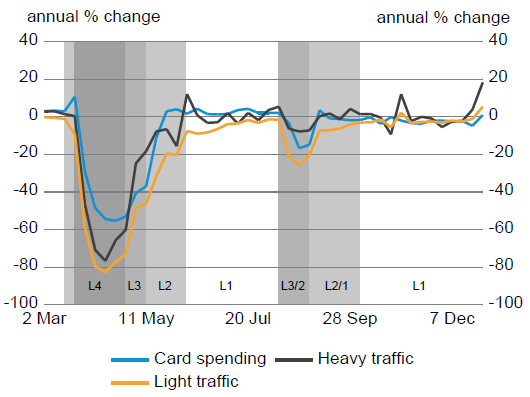 …and some data has been revised

As part of their annual supply-use balancing and revisions cycle, Stats NZ also released balanced nominal accounts for the year ended March 2019. This annual process results in minor revisions to the GDP estimates for the most recent couple of years, which need to be incorporated into the re-calibration process.

For each industry we then derived a time-weighted average of the expected economic impact at different alert levels using the time spent at those levels and during the various reference quarters. The resulting “estimated” industry impacts were then contrasted with the “actual” industry results (being the difference between the published industry GDP result and our counterfactual).

An assessment was then undertaken for each industry, using a range of auxiliary data (where available) to re-align our alert level impact assumptions with observed activity differences.

The detailed industry results were aggregated to the whole-economy level to provide a high-level check of the aggregate impact, the results of which can be seen in Table 2, where the “actual” GDP impact in the June 2020 quarter (relative to the counterfactual) was a 13% loss in GDP. This contrasted with a 16% fall that would have been expected using the HYEFU 2020 assumptions and a 12% fall using the updated BEFU 2021 assumptions.

Table 2: Contrasting assumptions versus outturns compared to the counterfactual

As these updated assumptions are calibrated using  the economic impacts observed over the entire 2020 year, it is not possible to precisely match each quarterly result, however these differences average out over the year.

Our updated Alert Level assumptions show less of an impact on economic activity than had been assumed at HYEFU 2020, which were in turn less pessimistic than we had been at PREFU 2020 (Table 3).

… with Level 2 and 3 impacts revised down…

Our alert Level 2 and 3 impact assumptions have been revised down considerably, likely reflecting a combination of factors including:

…driven by accommodation and food services

The main industry contributing to the improvement to the alert level assumptions at Levels 2 and 3 was the accommodation and food services industry, which saw higher-then-expected levels of activity in the September quarter as New Zealanders adapted to life under COVID-19 and domestic tourism benefitted more than had been expected from diversion of spending.

Activity in the construction industry was also materially better than expected, reflected in the continued record levels of consenting activity.

Thankfully the country did not experience a return to Alert Level 4 during the second half of 2020. As a result, there is effectively no additional information available upon which to base a re-assessment of our assumptions for this alert level. There were minor changes to some higher level industry estimates – resulting from updating lower level industry weights to reflect new annual industry benchmarks – however at the total economy level this did not materially change the aggregate alert level 4 assumption.

A summary of the different alert level impact assumptions across high level industry groupings is shown in Table 4. These assumptions have been rounded to the nearest 5 percent given the inherent uncertainty that surrounds these industry estimates. As can be seen, industries that are exposed to international tourism (such as Accommodation and food services) are most impacted, with the impact persisting into lower alert levels. Industries that were not classified as Essential (such as construction) are heavily impacted at Alert Level 4, however the impacts fall away rapidly at lower levels. Essential industries (including much of the food-producing parts of the Primary and Manufacturing sectors) maintain much of their output even at higher alert levels.

These estimates of alert level impacts are net of fiscal and monetary support that has been provided to date and assume that there would be a similar level of support in future lockdowns.

The impacts are derived as averages over the observation window of the 2020 calendar year, and do not seek to account for how the impacts may vary over time (for example in response to firms adapting behaviours). There is the possibility that the cumulative effect of extended periods at higher alert levels (or repeated instances of changing up and down alert levels) might result in impacts that are greater than estimated here.

The estimates remain subject to considerable uncertainty since the country (fortunately) has experienced limited instances of being at elevated alert levels, meaning that the calibration process has had limited degrees of freedom to work with.