Outlook for the Dairy Sector This Staff Insight article outlines the Treasury's current understanding of global dairy supply and demand and their implications for the outlook for dairy prices. The article also presents some modelling of aggregate New Zealand dairy farm revenues, expenses and cash-flows. The article concludes with an assessment of the impact on the New Zealand economy, including what has been factored into the 2016 Budget Update forecasts.

This article is also published as a Special Topic in the Monthly Economic Indicators May 2016.

Persistent global supply and demand imbalances have seen dairy prices fall sharply from their peak in early 2014. The initial imbalance was a combination of strong milk production growth in major exporters (including New Zealand, the EU and the US) and negative demand shocks in the two largest dairy importers, China and Russia.

More recently the imbalance has been chiefly due to the failure of milk production growth to slow below demand growth (Table 1). This is most pronounced in the EU, where milk production continues to grow despite negative price signals and growing inventories. This is partly a function of the removal of EU production quotas in April 2015, with more efficient farmers and producers ramping up production in anticipation of their removal. The relatively weak euro and low feed and fuel prices have also helped shield European farmers from the full impact of low dairy prices. Finally, the EU has recently increased the volume of butter and skim milk powder (SMP) that it will accept at intervention prices.

Milk production in New Zealand has contracted compared to a year ago, although not to the extent anticipated at the start of the season when El Niño weather conditions were looming as a significant risk in addition to low milk prices. El Niño has not been as severe as initially anticipated. Furthermore, farmers appear to have maintained recent productivity gains despite sharp cuts to expenditure over the past two seasons (Figure 1). The number of dairy cows in milk or calf at the start of the season fell by 2.3% but milk production has only contracted by 1.7% in the season to April. Some of these productivity gains are likely to be from the least productive cows being culled from dairy herds.

Over late 2013 and the first half of 2014, China built up significant inventories of whole milk powder (WMP) and, to a lesser extent, SMP. As a result, Chinese WMP import volumes fell by 17% (174,000 mt) in 2015 as they reduced these inventories. More recently, import volumes have returned to more “normal” levels, suggesting that inventories have fallen.

The import ban imposed by Russia on agricultural products from the EU, US and several other countries remains in place. Prior to the ban, instituted in August 2014, Russia was the world’s largest importer of cheese and butter, with much of this coming from the EU. Russian butter imports are about 30% lower than in 2013, while cheese imports have more than halved. This has led to some displacement of EU exports into New Zealand’s traditional markets.

The global supply and demand imbalance is expected to persist throughout 2016. The United States Department of Agriculture (USDA) forecasts global milk production growth of 1.8% in 2016, with dairy consumption expanding 1.6%. Inventories are expected to increase further from their already high levels, although the excess inventory mix has changed from WMP held in China (in 2014 and early 2015) to SMP, cheese and butter stored in Europe, and SMP and cheese in the US (in 2015 and 2016).

Owing to this supply overhang, dairy prices are expected to recover only slowly. The Treasury’s Budget Update economic forecasts, released on 26 May, assume a gradual recovery in dairy prices as monthly milk production growth slows in the second half of 2016 (Figure 2). Dairy prices are assumed to return to their long-term levels around the middle of 2018 as the global market returns to a more balanced position. There are clear risks to these assumptions, chiefly owing to the speed of adjustment in global milk production growth. Should the production adjustment take longer than anticipated, recovery in prices could be delayed and/or take longer. 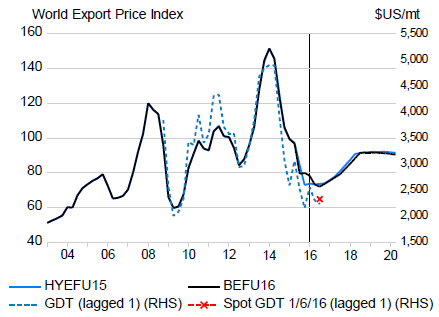 On 26 May, Fonterra forecast an initial farm-gate price of $4.25/kg milk solids (kg MS) for the 2016/17 season, below analyst expectations of $4.50 - $4.80/kg MS. This is the third low farm price in a row (Table 2). However, Fonterra is looking to offset some the cash-flow effects of the low headline price by increasing the advanced payment (the monthly payment made to farmers based on their milk production) as well as bringing forward the retrospective payments from the 2015/16 season.

Treasury has modelled revenues and expenses for dairy farms at an aggregate level. Fonterra’s farm-gate price, advanced payment schedule and dividend payment are assumed to be representative of the sector as a whole.[1] Operating expenses are based on DairyNZ benchmarking. Debt and interest rates are sourced from the Reserve Bank.

In the 2014/15 season, the sector in aggregate was estimated to have a small cash-flow shortfall of about $0.5 billion (Figure 3). In part this was due to large retrospective payments from the record 2013/14 season helping to offset low advanced payments within the season. Benchmarking data also indicate farmers were successful in cutting expenses by around $1.1 billion. However, this estimate of a small deficit is at the aggregate level. Digging into expense breakdowns by quartile suggests around half of farms had negative cash-flows.[2] This is consistent with analysis by the Reserve Bank based on unit record data.[3] Dairy farm debt held by banks was $37.9 billion at the end of the season.

The cash-flow situation has worsened in the 2015/16 season. Although farmers continue to make progress on reducing operating expenses (by an estimated $0.8 billion), the low milk price in 2014/15 meant that retrospective payments in late 2015 were small. Furthermore, dairy farm debt increased, leading to higher debt servicing costs despite falling interest rates. As a result, the sector as a whole is estimated to face a cash-flow deficit of about $2.7 billion (after accounting for Fonterra’s loan support package), with the majority of farms facing negative cash-flows. Dairy farm debt is likely to exceed $40 billion by the end of the season as farmers take on additional debt to cover this negative cash-flow.

The cash-flow situation is expected to remain poor in the 2016/17 season. Based on Fonterra’s farm-gate price forecast, and assuming a small decline in milk production in line with the Budget Update forecast and a further $0.8 billion reduction in operating expenses, the sector is estimated to face an aggregate cash-flow shortfall of about $2.3 billion. As with the preceding season, the majority of farms will face negative cash-flows. Most farms will be in their second season of negative cash-flows, with half facing a third consecutive shortfall.

Given the inherent difficulty in forecasting milk prices, Figure 3 also presents some alternative scenarios based on different milk price assumptions. The main conclusion from this scenario analysis is that dairy farms in aggregate are likely to face negative cash-flows in the 2016/17 season. Under the model assumptions, a farm gate price of around $6.15/kg MS would be needed for the sector to have neutral cash-flows in aggregate during the season. [4]

...with a significant flow-on effect to the economy as a whole…

The dairy sector directly contributes 3.0 – 3.5% of GDP, with roughly two thirds of this contribution from dairy cattle farming and the remainder from dairy product manufacturing.[5] A recent Lincoln University study provides some estimates of the indirect contributions of the agriculture sector as a whole.[6] Assuming these are broadly representative of the dairy sector, this would put dairy’s total direct and indirect contribution to the economy at about 5 - 6%.

Low dairy prices and farm incomes flow through to the economy through a number of channels. Dairy is New Zealand’s largest goods export category and falling dairy export revenues have driven the annual goods trade balance from surplus to deficit. Dairy export values fell by $3.4 billion in the year to June 2015. In the Budget Update, dairy exports are forecast to fall by a further $1.2 and $1.5 billion in the 2016 and 2017 June years respectively. There may be additional impacts on the current account via the primary income deficit if the additional dairy debt leads to increased interest payments overseas (chiefly to the Australian parents of local banks).

Domestically, the fall in farm incomes impacts on consumption and investment, particularly in dairy intensive regions. For example, growth in seasonally adjusted retail sales in Waikato and Canterbury was negative in the December 2015 and March 2016 quarters. While necessary for farmers, the reduction in operating expenses over the past two seasons had a direct impact on the incomes of those businesses servicing the farming sector. Further reductions in farm expenses are expected in 2016/17. In the Budget Update forecasts, this is mostly reflected in the moderation of investment growth over the next couple of years. Farm profits are also a major driver of other persons tax. This tax type is expected to be broadly flat in the 2015/16 and 2016/17 fiscal years as few farms make a profit before growing again in subsequent fiscal years.

While lower dairy prices and contracting milk production have been a modest drag on economic growth, New Zealand’s overall economic outlook remains positive. Significant drivers of growth include the construction sector, travel services exports (chiefly tourism) and the domestic services sector. Services exports and other goods exports (such as horticulture and beef) are generally performing well, partially offsetting some of dairy’s impact on nominal GDP and the current account.