New Zealand always ranks highly in the World Bank’s Ease of Doing Business report. This year, we have come out first. What has brought about this change? Have we still got room for improvement?

Every year, the World Bank publishes its Ease of Doing Business report. This looks at a range of measures across 190 countries, and assesses how easy it is to do business in each. New Zealand always comes out near the top of the pack. Last year, for the first time, we came first overall, knocking Singapore off its perch.

So what has changed? The main reason we have gone up the rankings is because the World Bank has made some adjustments to its methodology. In fact, they have revised 2015’s report in light of this so that we would have come out ranked first then as well.

We have had a couple of policy changes that have made a difference too. We’ve improved our score for paying taxes, due to the reduction in ACC levies and the removal of cheque duty.

The data underpinning the report is extrapolated from the largest business city, in New Zealand’s case, Auckland. While it may be comparable to other large business centres internationally, it may be less representative of New Zealand as a whole.

The World Bank uses ten indicators for the report, each of which has a number of sub-indicators. Overall, New Zealand came top in the world for five of these indicators. We come out well above the average for the OECD High Income Average (OECD HIA) overall, and in seven out of ten indicators. But does this tell the complete story about how ‘easy’ it is to do business in New Zealand?

New Zealand is the best place for setting up a business. The indicators look at how long it takes to set up a business, how many procedures there are, the upfront cost and capital requirement. We are the fastest (only half a day), have the fewest procedures (just one), like many countries require no capital and are relatively cheap (ranked ninth). Last year, for the first time, the World Bank has examined the differences for men and women, and it is a relief to see that in New Zealand there are no additional barriers for women to set up businesses.

New Zealand didn’t do so well against all indicators, as can be seen on the chart below:

Areas with most room for improvement 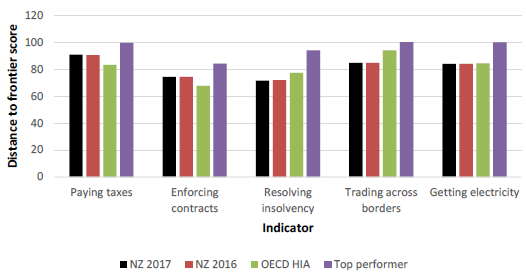 Trading across borders was our worst ranking, perhaps not surprisingly, due to our geographical distance from trading partners. Cost is the biggest impediment. Getting electricity is an area where we do surprisingly poorly, also due to the cost.

Other indicators against which we have scope for improvement are the cost of enforcing contracts, and improving the insolvency index.

As well as looking at the comparison group that the World Bank chose for New Zealand, it is interesting to look at our performance alongside the other Small Advanced Economies (SAEs) which is a group we are more commonly compared to. On the whole, the SAEs tend to do quite well:

Their comparative performance can also be seen against each indicator on this graph: Overall, it looks like New Zealand is a great place to do business, although there are clearly still some barriers, such as cost. The World Bank report offers some insight on where gains could be made. The next challenge is to reflect our ease of doing business in our productivity.