Productivity measures how efficiently production inputs, such as labour and capital, are used in an economy to produce outputs, or goods or services. Productivity growth is a key driver of incomes and higher incomes, both at a household and country level, enable greater financial wellbeing and affordability of higher living standards, such as improved healthcare and education.[1]

This Special Topic will discuss recent trends in labour and multifactor productivity (MFP) growth and capital deepening. Labour productivity refers to the quantity of goods and services produced in an economy per hour of labour worked:

MFP reflects the overall efficiency with which labour and capital inputs are used together in the production process. MFP is unobservable and so measured as the residual growth in output unaccounted for by the growth in capital and labour input. Changes in MFP reflect the effects of changes in a number of unobserved inputs, which can range from management practices and organisational change to general knowledge, economies of scale and measurement error.

Together, increases in capital per worker and increases in the efficiency with which both labour and capital are used will increase labour productivity.

Labour productivity and MFP in the measured sector both increased in the year to March 2018, but at the slowest rate since 2009 when the impact of the Global Financial Crisis (GFC) led to falls in productivity.

As can be seen in Figure 13, since the GFC labour productivity growth has been almost completely driven by growth in MFP as there has been little change in capital per hour worked. Prior to the GFC, investment and subsequent growth in capital was greater than the growth in labour input and the capital-labour ratio grew. 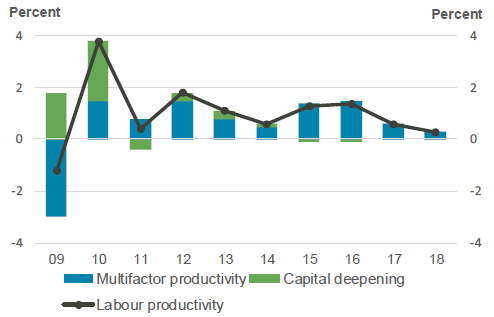 Since the GFC, both capital and labour have grown at a similar rate, while the growth in the capital to labour ratio has plateaued, as seen in Figure 14. 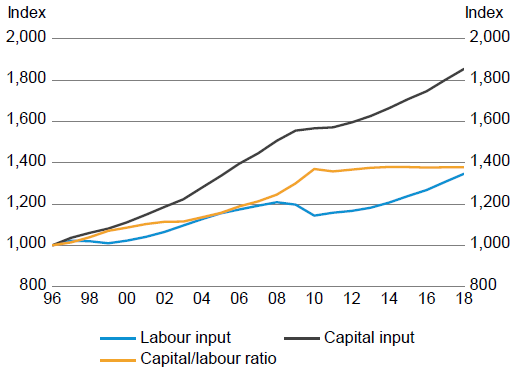 Declining MFP growth and weak capital investment are considered the main contributors in advanced economies for low productivity growth relative to precrisis trends (IMF, 2017). However, causes of the slowdown are highly debated and other causes could include slowing technological progress, slowing international trade and changing demographics. Over reliance on the labour market as a driver of economic growth is also considered a factor in New Zealand. Since 2000, our labour market growth has been more than twice the OECD average[3]. Whilst a strong labour market is important for many outcomes, including incomes and wellbeing, sustained employment growth, together with relatively weak capital investment can lead to weaker labour productivity and MFP growth.

Issues with productivity measurement are also frequently discussed and although there is general consensus that the global slowdown is not wholly a measurement issue, difficulties in measuring new services and outputs (such as those relating to the so-called Gig-economy) could also be contributing to the slowdown, as these activities may not be accurately captured in output measures. Source: Author's elaboration based on The Conference Board Total Economy Database, http://www.conference-board.org/data/economydatabase/

Labour productivity growth is expected in the future

Whilst forecasts are subject to uncertainty, both RBNZ and the Treasury predict labour productivity growth to return to just over 1 percent per annum by 2021.[6] These measures refer to the whole economy rather than just the measured sector as examined in the official productivity data above.

The Treasury expect that firms will adjust to recent increases in labour input and capacity constraints with higher capital investment and that this steady investment growth, combined with lower labour supply growth, will lift the capital-to-labour ratio.

The Treasury will update its forecast in the Budget Economic and Fiscal Update 2019, published on 30 May 2019.