The nominal neutral interest rate (NIR) is the unobservable interest rate that prevails in an ideal world where the economy grows at its trend rate, inflation is stable at its target and the output gap is closed.[1] Estimates of the nominal NIR have large uncertainties owing to its unobserved nature.

The nominal NIR is an important assumption in the Treasury's economic forecasts as it has direct and indirect influences on short-run interest rates and economic growth. Short-run interest rates below the nominal NIR implies expansionary monetary conditions. All else equal, an expansionary environment produces a relatively stronger growth profile and higher inflationary pressures.

Studies have shown that the NIR has been falling over time in many developed nations, including New Zealand. Accordingly, the Treasury recently revised its terminal nominal NIR assumption from 3.75% at BEFU 2019 to 3.0% for the upcoming Half-Year Economic and Fiscal Update (HYEFU) forecasts, which is the assumed value of the nominal neutral 90-day rate at the end of the forecast period. A lower NIR assumption implies low interest rates have less stimulatory power than previously assumed. This Special Topic explains the indicators and model estimates that have motivated this change. 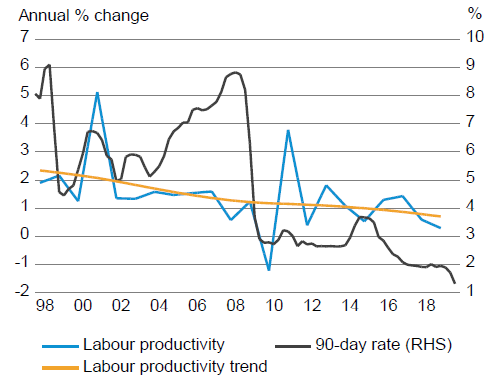 Global yields on 10-year bond rates are indicative of market expectations of future economic conditions and have been declining for some time (Figure 2), but are themselves influenced by cyclical factors. One technique to abstract yields of 10-year bonds from cyclical factors to gain insight into market perceptions of the long run is by estimating the implied zero-coupon 5-year-5 year forward government bond rate.[3] This is the yield on a 5-year government bond issued 5-years from now, based on current market pricing of 5 and 10-year government bonds. The yield on this theoretical security is largely driven by market expectations of future economic conditions when the effects of cyclical factors have dissipated.

The implied 5-year-5-year forward bond rate has trended downwards for some time (Figure 3), indicating that market expectations of future short-term interest rates have declined. While the rate of decline appears to have reduced in the decade prior to the GFC, financial markets have increasingly taken the position of a persistently lower interest rate environment in the future. 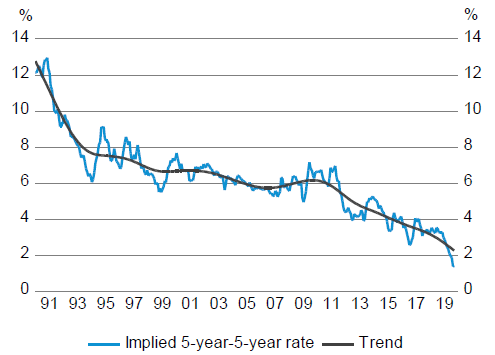 We consider a suite of modelling approaches

Owing to the unobserved nature of the nominal NIR, different models will produce different estimates. A suite of models is used to reduce model uncertainty when estimating the long-run nominal NIR.

This suite of models includes analysis of the historical 90-day rate, estimates of the time-varying intercept of the Taylor rule and estimates of a ‘neutral' yield curve based on historical bond yields. Some of these methods are outlined in this Special Topic. The Reserve Bank of New Zealand (RBNZ) also uses a suite of models to estimate the neutral Official Cash Rate,[4] which is closely related to the 90-day rate. These models were selected for the broad economic scope covered, including analysis of market expectations, to estimate the nominal NIR.

Each model has its own uncertainties, and some variables such as the output gap are not directly observable. Market pricing of bonds adds another level of uncertainty around the estimates from time varying risk and liquidity premiums.

Research by Hall and McDermott (2016) shows that New Zealand has experienced three business cycles since 1990, when the RBNZ officially implemented its inflation targeting mandate. The first spanned 24 quarters from 1991 to 1997; the second from 1997 to 2007; and the current business cycle began in 2008[5].

We first make the assumption that monetary policy is neutral on average over a business cycle. From there, the nominal NIR can be estimated by taking the average interest rate for each business cycle.[6] Real 90-day rates were used in this exercise to remove the distortionary effects of inflation.

Our estimates suggest that the real NIR has fallen in each successive business cycle since 1990, reaching a level of 1.3% in the current business cycle. In the post-GFC era, annual inflation has averaged 1.8% to date, suggesting a nominal NIR of around 3.1% (Figure 4). 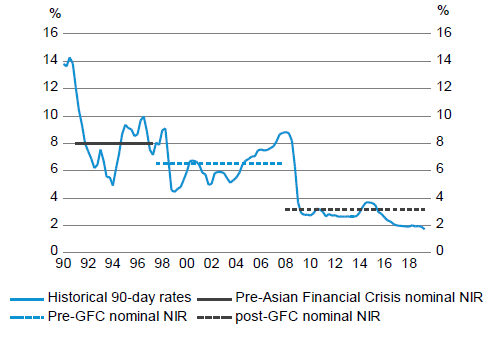 …along with the Taylor rule

The Taylor rule captures some of the key variables of interest that policymakers consider when setting nominal short-term interest rates. In Taylor's original specification, the intercept represents the neutral interest rate independent of time and other explanatory variables including inflation deviation from target and the output gap represent the policymaker's key variables of interest.[7] Making the assumption of a time-invariant NIR produces an implausibly high estimate of the current NIR. To allow for some degree of time-dependency and to account for the business cycles identified in Hall and McDermott (2016), dummy variables were introduced to represent each business cycle. Lags were applied to inflation and the output gap to reflect the information set available to policymakers at the time short-term interest rates were set.

The estimation results show a steady decline in the neutral level of the 90-day rate in successive business cycles (Figure 5), with an estimated rate of 3.0% applicable in the post-GFC period. 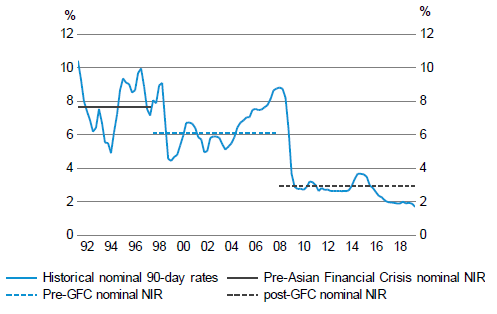 The limitations of the Taylor rule are well documented[8]. However, the use of a Taylor rule provides a useful approximation of policymaking and an indication of how interest rates have moved as a response to inflation and the output gap.

Estimating the NIR from a neutral yield curve

The yield on a 10-year bond usually has a positive premium over a 90-day bill, and the magnitude of this premium forms the basis for the interpretation of the yield curve. If investors believe future rates will rise, then the premium 10-year rates have over the 90-day rate will rise and the yield curve steepens. However, if investors believe future short-term interest rates will drop, then 10-year rates will fall - the two rates come closer together and yield curve flattens. If monetary policy is neutral on average over the business cycle, a steep yield curve will be unwound by a flatter yield curve, implying that deviations from a ‘neutral' yield curve would be cancelled out, allowing for the estimation of the NIR over a business cycle.

The RBNZ developed a model with this logic and used a Kalman filter for their estimation.[9] Updating this model with more recent data shows a decline in the estimated NIR since 1992, shortly after the RBNZ adopted an inflation targeting approach to monetary policy (Figure 6). This model estimates the current nominal NIR to be 2.3%. 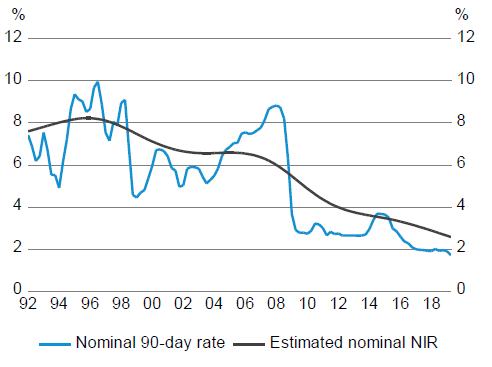 One of the limitations of the previous approach lies in the omission of monetary policy as a response to changes in the economy. One way to get around this is to introduce a Taylor rule to the model.[10] A similar result is produced from this addition, and the estimates suggest a current nominal NIR of 2.5% (Figure 7). 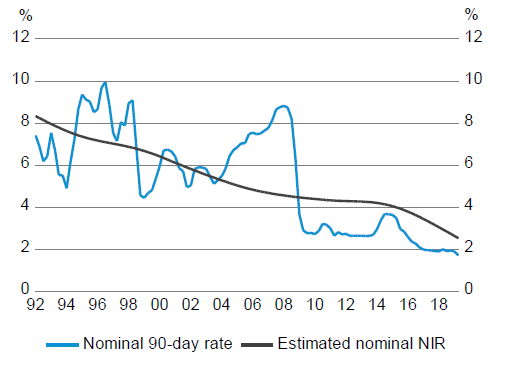 The models investigated showed estimates of the nominal NIR ranging from 2.3% to 3.1% but the true value remains unknown. We have judged the terminal nominal NIR to be 3.0% in our latest forecasts, which is at the top of the estimated range shown here but is 0.75 percentage points less than what was assumed at BEFU 2019. We will continue to review the level of the NIR over time.

Various measures of the NIR indicate that it has been on a downward trend for over two decades, and markets are not expecting a reversal in the trend seen to date. The fundamentals of the economy indicate that lower trend economic growth, an ageing population and lower productivity growth are likely to continue, which would indicate a lower interest rate environment to keep output growth and inflation stable in the long run.