Real average growth in goods and services exports declined from 4.1% p.a. over the 1998-2008 period to 2.4% in the subsequent decade. Unprocessed primary products have grown at the fastest pace over this period, and account for 40% of the value of merchandise exports. Moreover, over the last decade, export concentration levels have increased. Dairy products accounted for a quarter of New Zealand’s total merchandise exports in 2018, up from 17% in 1998. Over the same period, goods exports to China’s have risen from just 3% of total exports to 25%. This puts New Zealand at risk from shocks emanating from either China or the global dairy sector. This Special Topic takes a closer look at the trends in New Zealand’s export concentration levels over the past two decades, and briefly discusses the risks and mitigating factors associated with this.

One way to assess concentration levels objectively is by looking at the Herfindahl-Hirschman Index (HHI).[1] The HHI ranges between zero and one, with a higher value indicating that exports are more concentrated. New Zealand’s HHI scores have increased over the last decade from both a commodity and export destination perspective (Figure 12). 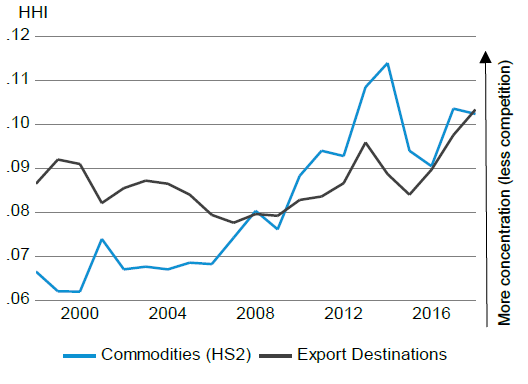 …but are not significantly higher than comparable countries

Figure 13 shows the HHI concentration levels for New Zealand from an export destination perspective as well as the weighted averages for two groups of countries: the OECD and the top 10 exporters in the world in 2018.[2] New Zealand's market concentration level is not significantly higher than comparable countries, although the upward trend witnessed in New Zealand since 2014 is more pronounced than in the other two groups. 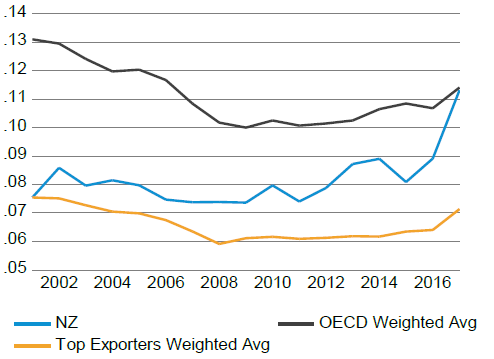 China overtook Australia as New Zealand's largest export destination by value in 2013. Exports to Australia have declined in recent years, reaching $8.2bn in 2018, compared to the 2011 peak of $10bn (Figure 14). 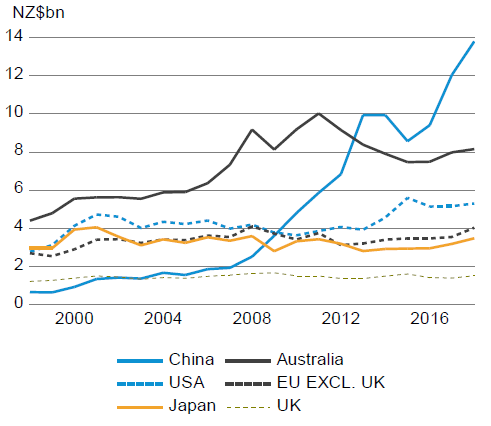 …and to China's dairy sector in particular

As a result, dairy exports have become more concentrated

The composition of New Zealand's dairy exports by country has changed drastically over the past 20 years. In 2000, dairy export destinations were diverse, with the top 10 markets each accounting for just 3% to 7% of total exports, while China did not even feature on this list. China's demand for dairy grew rapidly in the 2000s (Figure 15), supported by an increase in incomes and urbanisation, with the latter being associated with a shift towards a more Westernised diet. New Zealand's dairy exporters arguably started benefiting disproportionately from this from 2008 onwards due to the Free Trade Agreement (FTA) with China coming into effect. At the same time, the 2008 China milk scandal (the presence of melamine in milk and infant formula) resulted in consumers preferring imported milk products. 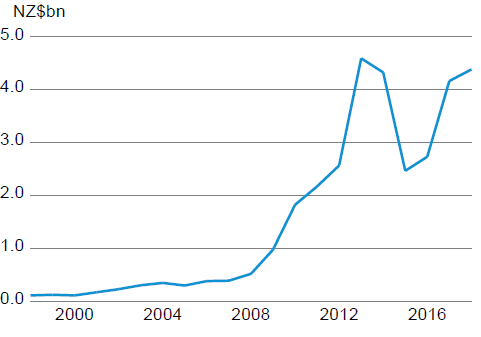 With China now importing about a third of New Zealand's dairy products, the sector has become more concentrated. In fact, the HHI has increased from just 0.04 in 2000 to 0.11 in 2018.

Our increasing exposure to China and dairy holds risks…

Exposure to a single market, and moreover to a single sector in this market, holds risks that are somewhat mitigated for homogenous bulk commodities where overall supply and demand are the most important drivers over the medium to longer term. A single event in either China or the global dairy sector can lead to a substantial change in export revenues. Over the 2008-13 period, several factors resulted in a sharp increase in export revenues, but the reverse can also happen, as was the case in 2015-16. In 2013, Fonterra discovered botulism-causing bacteria in some of its whey products that had been sold to third parties to make infant formula, among other products. This resulted in a product recall and a temporary ban from China on the imports of some whey products from New Zealand. The botulism discovery in fact turned out to be a false positive test, which helped to resolve the crisis relatively quickly. The event initially caused a sharp increase in Chinese demand and prices, followed by an equally sharp decline in prices and export revenues as stocks were unwound.

Although New Zealand's exposure to China carries some risk, it also presents opportunities. Table 2 shows the top dairy consuming countries in the world in per capita terms (all those with consumption above the world average), as well as China.

While dairy consumption levels have plateaued in the developed world, in the world's most populous country there is still significant room for growth. Per capita dairy consumption in China expanded very quickly between 1998 and 2008 (12% p.a.), before stalling over the subsequent decade (0.3% p.a.). The sharp increase in the demand for dairy in China, supported by publically-funded advertising on the health benefits of milk, comes despite the fact that lactose intolerance levels are much higher than in the Western world. Over the 2018-2027 period, the OECD projects that China’s per capita dairy consumption levels will grow by an average of 1.6% p.a., which implies a noticeable increase in absolute terms given the country’s massive population. Moreover, considering that consumers continue to be suspicious about local dairy products due to the 2008 scandal, foreign dairy products will continue to be in high demand.

Nevertheless, while continuing to maintain and grow our dairy market share in China, from a risk management perspective it would be prudent to expand exports to other markets in order to lessen the dependence on China. In particular, the New Zealand dairy sector should focus on countries where it is not yet well represented, while also considering whether these markets have a good appetite for dairy imports as well as strong growth potential. Figure 16 below shows New Zealand's share in the dairy imports of the top 15 dairy importers in the world. Globally, New Zealand accounted for 11.5% of total global dairy exports, and remains under-represented in some of the world's largest dairy importers. In particular, there still appears to be significant untapped potential in European Union (EU) markets, although this would be contingent upon gaining market access. 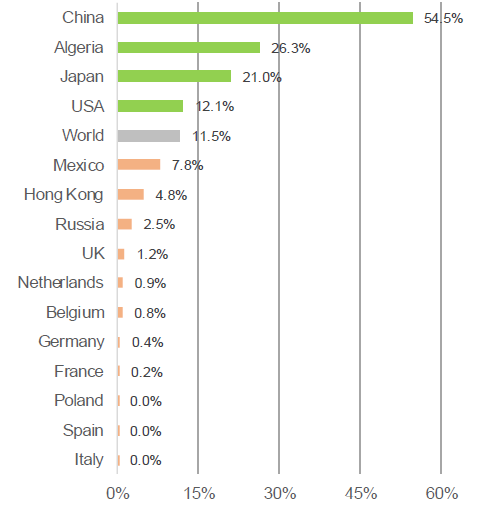 Kiwifruit and wine offer possible sources of growth and diversification

Wine grape production increased at a rate of 4.6% p.a. during 2002-2017, increasing its contribution to total horticultural production from 25% to 42%. In the 12 months ending June 2018, the value of New Zealand's wine exports grew for the 23rd year in a row. In addition to providing a growing amount of export receipts, the wine industry is also making a significant contribution to the tourism sector. According to New Zealand Winegrowers Inc., close to a third of all holiday visitors to New Zealand visit a winery; these visitors tend to stay longer in New Zealand, spend more money, and visit more regions.

Although wine exports have grown strongly, the sector is also quite concentrated, both in terms of varietal and market. Sauvignon Blanc accounted for 86% of New Zealand's total wine exports in 2018, compared to around half of the total in 2001. New Zealand has been successful in carving out a niche market in Sauvignon Blanc, which has supported export volume growth. Meanwhile, New Zealand's wine exports predominantly go to three countries, namely the US, the UK, and Australia. In 2018, these three countries accounted for 76% of New Zealand's total wine exports in value terms. While exports to these countries dominate, there has also been robust growth in exports to Canada, the Netherlands, and China.

New Zealand's kiwifruit exports have been on an upward trajectory over the past two decades, with export values growing at an average rate of 8.4% p.a. over the 1998-2018 period (Figure 17). In 2017, kiwifruit once again overtook wine as New Zealand's largest horticultural export earner. 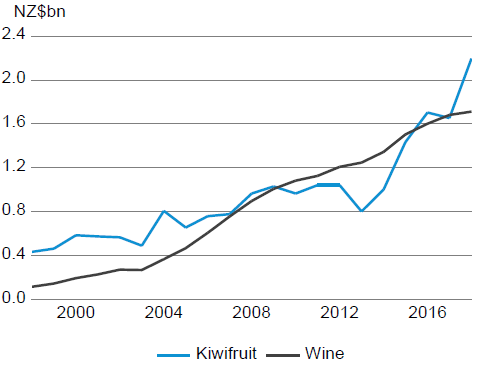 New Zealand currently has 10 active FTA's in place, with a further three that have been concluded but are not yet in force, and a number of others that are at varied stages of the negotiation process. While FTAs tend to boost trade levels, they may also have the by-product of an increase in concentration levels. That being said, reaching an agreement with India that will open up the country's dairy sector to New Zealand would serve to lessen our dependence on China. India's dairy market is the largest in the world in absolute terms and is projected to continue growing strongly. New Zealand's dairy exports to India are currently taxed at the most-favoured-nation (MFN) weighted average tariff rate of 43.1%. Talks on New Zealand's FTA with India are ongoing, as are negotiations on the Regional Comprehensive Economic Partnership (RCEP), which also includes India. These FTA's could be the key to improved access to the potentially lucrative Indian market. Furthermore, negotiations with the EU on an FTA's are also ongoing, which if successful would give New Zealand improved access to some of the world's biggest dairy importers, among other benefits.