Household wealth can be an important influence on the macro economy, particularly via its impact on consumer spending through the so-called ‘wealth channel’. This special topic investigates developments in the household assets and liabilities that comprise net wealth.

On balance, the data shows that New Zealand households are increasingly exposed to the housing sector (particularly when financial assets are adjusted for equity in rental property). Any downturn or shock to the housing market will disproportionately affect the asset side of the balance sheet. Since we expect house price growth to slow, this will reduce the wealth effect, especially if debt continues to grow or interest rates rise. This may have a subsequent dampening effect on consumption and consumer confidence.

The evolution of household net wealth

The Reserve Bank publishes data on household assets and liabilities, and net wealth. They also present some household wealth data as a percentage of disposable income. Doing so helps control for the impact of population growth, as aggregate incomes are dependent on the size of the population and the general movement in prices. It also gives an indication of how manageable debt levels are (particularly when combined with debt servicing estimates). This special topic summarises developments on both sides of the balance sheet.

Aggregate household net wealth has increased significantly over the past two decades, from around 600% of disposable income at the turn of the century to a peak of 887% in 2016 and is currently around 869%. 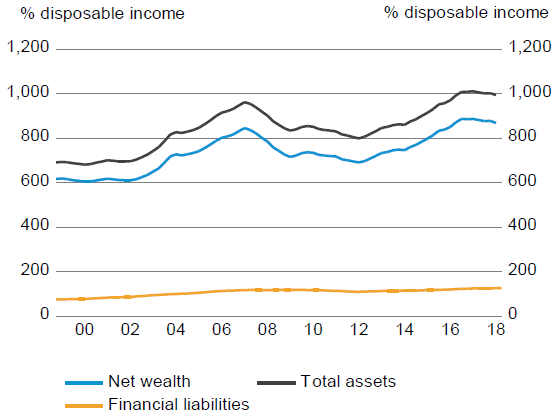 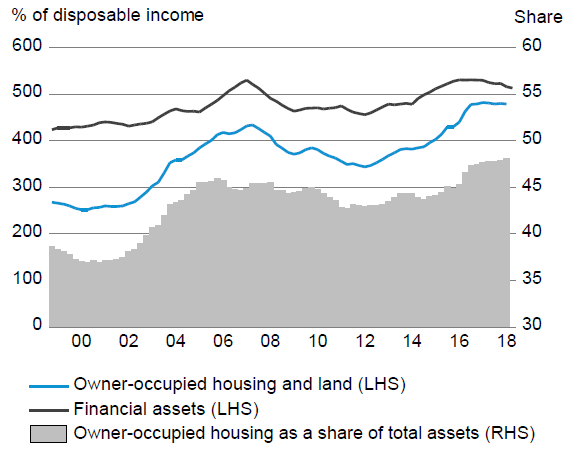 The value of both financial assets and housing assets held by households have increased over time. More recently, the value of assets to income has been broadly flat. While households continue to own more financial assets than housing, rapid house price growth has seen the gap narrow, with the share of housing in total assets increasing.

It is worth noting the treatment of rental properties in the household accounts. Rather than showing the asset (the rental property) and any liability (rental property debt) separately, only the net equity is included (ie, the current market value of property less debt) and this net equity is treated as a financial asset (as with equity in other businesses owned by households).

...with little growth in other financial assets 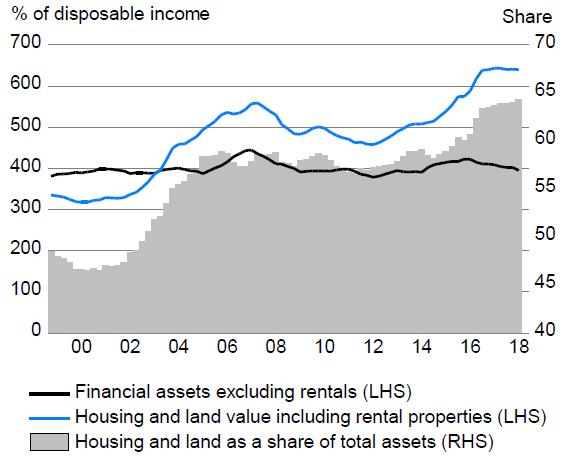 Figure 5 adds rental property loans to owner-occupied housing loans and shows that student and consumer loans make up a small share of disposable income compared to housing loans. We also observe that the biggest build-up in housing loans occurred between 2000 and 2007, with a relatively more gradual increase post 2011. 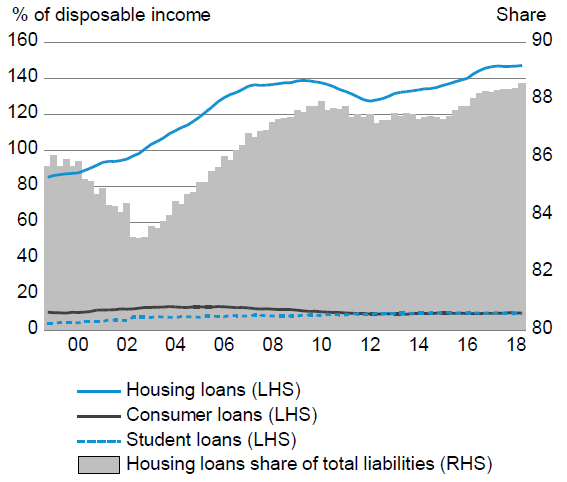 The evolution of debt as a percentage of disposable income (Figure 6), shows that debt levels rose strongly up until the GFC. Debt as a percentage of disposable income reached 158% in June 2007, before flattening as households pulled back on borrowing and started saving. This ratio fell to a low of 146% in March 2012 when it started rising again, reaching a peak of 166% in March 2017 where it currently remains. 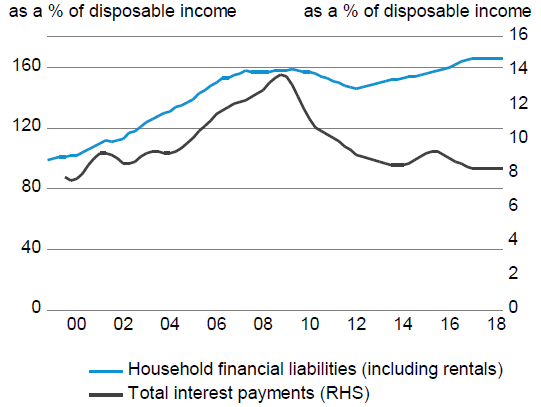 Despite high levels of debt, debt servicing as a percentage of disposable income, remains at its lowest level since mid-2000. This reflects the current low interest rate environment.

The RBNZ has indicated that the official cash rate is likely to remain unchanged until 2020, alleviating pressure on floating and short term fixed rates. However, longer term fixed rates are likely to face some upward pressure if international credit availability falls and bank funding costs rise. Whether future interest rate increases result in debt servicing rates exceeding previous highs will depend on the extent and timing of interest rate increases.

At an aggregate level there are reasons to believe that debt levels remain manageable.  At the individual level, there are likely to be subgroups of households that are more exposed.  In particular, recent entrants to the property market are likely to have high debt levels relative to their incomes. This reflects rapid house price increases relative to incomes, in part due to low interest rates and a lack of supply relative to demand. High debt levels increase households’ vulnerability to shocks in income, employment, and interest rates. 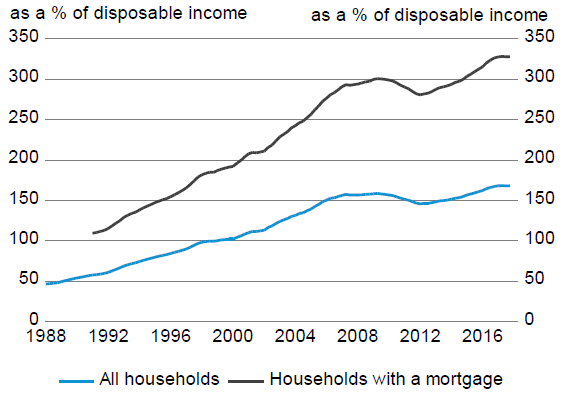 The Reserve Bank’s latest Financial Stability Report, showed that for households with a mortgage, growth in debt relative to incomes has been more significant, reaching 328% at the end of 2017 (Figure 7).

Housing debt as a percentage of housing assets has dropped significantly over the past 10 years (Figure 8), largely owing to rapid increases in the value of houses. While debt levels have been increasing, the overall extent to which the housing stock is leveraged (the value of housing loans compared to the value of housing) fell to a series low of 22.6% in September 2016 and has subsequently only risen modestly, after peaking at just under 29% in 2009.  The increase to this peak reflected falls in the value of housing assets between March 2008 and 2009 combined with modest increases in housing debt. The more recent decline is not particularly surprising in an environment of rising house prices as for most households the value of their asset will have increased while their mortgage will have fallen slightly - unless they actively increased their borrowing. A fall in average house prices of around 19% would see housing debt to asset ratios return to their 2009 level.