Stats NZ’s new official measure of permanent and long-term (PLT) migration indicates that the overall net inflow of PLT migrants is lower over recent years than previously thought. The implication is that the total population has not increased as much as previously reported. The new measure implies a lower level of migration going forward.

The implications for the economic growth outlook remain uncertain. Slower population growth than projected in the Half Year Update, all else equal, would provide less support for GDP growth. However, downward revisions to past population imply that per capita income is a little higher. If past HLFS total hours worked are also revised downwards, then labour productivity may be higher. Should higher productivity persist into the future then it may partially offset the dampening effects of slower population growth.

Outcomes and intentions: explaining the two measures of PLT migration

Stats NZ has adopted a new official measure of permanent and long-term (PLT) migration. The new, outcomes-based, measure estimates PLT migrant arrivals and departures based on actual and projected movements in and out of the country and length of stay. The new measure replaces the old, intentions-based, measure derived from stated intentions on arrivals and departure cards.

The outcomes-based measure uses a ‘12/16 month rule’ to class the migrant status of a traveller. Under a 12/16 month rule, a traveller is considered a permanent arrival (departure) if they spend 12 out of 16 months in (out of) New Zealand following a border crossing. The 12 months need not be consecutive.

The intentions-based measure uses a traveller's stated intentions reported on departure and arrival cards. Under this system of classification, a traveller is considered a permanent arrival (departure) if they intend to stay in (live away from) New Zealand for at least the next 12 months.

In order to mitigate the time lag between a border crossing and the migrant status of a traveller, Stats NZ produces estimates for the most recent 16-months. Stats NZ will revise the estimates with each release as they get more information about travellers’ length of stay in/out of New Zealand.

Figure 1: Uncertainty around PLT migration estimates increases the more recent the data are 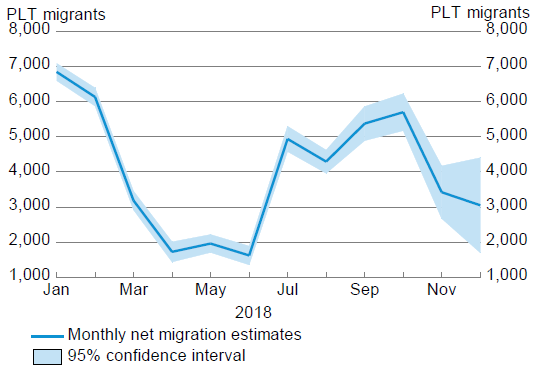 Figure 2: revisions between releases can be substantial 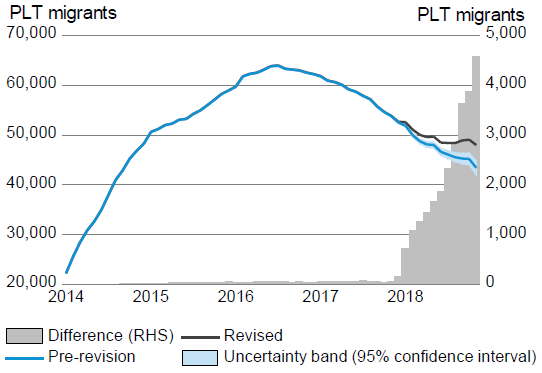 The uncertainty bands reflect model uncertainty not the extent of future revisions to provisional data. Future releases will provide further insights into the reliability of the data. Notably, the most recent months of estimates carry the most uncertainty. In the December 2018 month Stats NZ was able to classify one in four arrivals with certainty, increasing to nine in ten after four months.

What is the difference between the two measures?

In general, historical migration cycles are consistent between the two series, although the magnitudes of the cycles differ (Figure 17). The outcomes-based measure shows annual PLT net migration peaked at 63,948 in July 2016, a year earlier and around 8,000 lower than the 72,402 peak in July 2017 suggested by the intentions-based measure.

Figure 3: Net migration cycles are consistent between the two series

The outcomes-based measure shows a consistently higher level of both PLT arrivals and departures compared with the intentions measure (Figures 18 and 19). 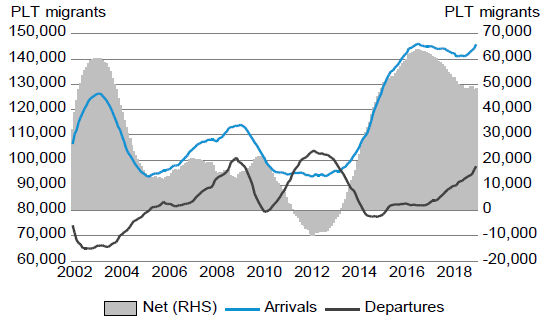 Over recent months the outcomes-based measure shows a flattening off of the decline in PLT net migration, settling at levels of around 49,000. This flattening off was not present in intentions measure (Figure 19). The pickup in arrivals has been consistent across recent months, potentially signalling further increases. As these are the most recent data points with the highest level of uncertainty, the Treasury will be closely watching future releases to see how the data change. 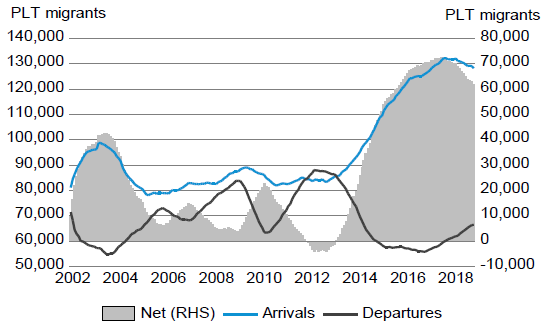 We are unable to tell the compositional differences in the early 2000s net migration cycle as Stats NZ has not produced more detailed breakdowns of new outcomes-based PLT migration for this time period.

What are the compositional differences?

Over the most recent 4-years for which data are available, the drivers of migration in terms of New Zealand and non-New Zealand citizens are broadly consistent between the two series. 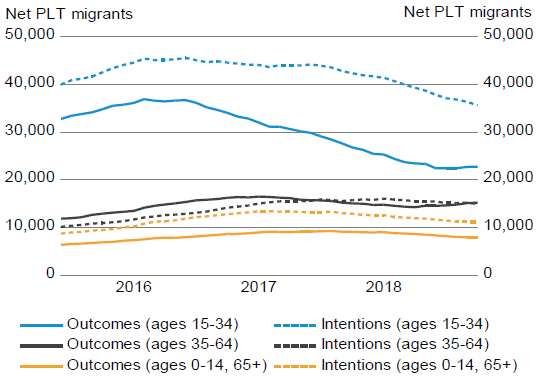 Almost all of the difference between net migration in the two series can be accounted for by working age migrants aged 15-34 (Figure 20). According to the new outcomes-based measure, the working age share of net migrants is around 2% to 6% lower compared with the intentions-based measure.

Stats NZ uses census benchmarks to revise estimates of the resident population, so the differences between the two series should be accounted for up to the last census in 2013.

Since 2013, the outcomes-based measure of PLT net migration has been consistently lower than the intentions-based measure that was used by Stats NZ up until the September 2018 quarter to estimate the resident population.

The cumulative difference between the two measures from March 2013 (when the census was held) to October 2018 (when the last intentions-based estimate of PLT migration is available) is 47,000. Applying this difference to the September 2018 quarter resident population estimates would see the population 46,000 (or around 1%) lower.

Estimates of the resident population are used in a range of key statistics produced by Stats NZ including the Household Labour Force Survey (HLFS) and estimates of GDP. It is unclear what impact revisions to the population will have on these measures, for example HLFS estimates of total number of employed and unemployed and total hours worked could be revised down, but ratios such as the unemployment rate may remain unchanged.

The implications for the economic outlook are uncertain. All else equal, a slower rate of population growth in the near term would result in slower GDP growth. However, if the population is revised down over history, consistent with the lower levels of net migration, then the view of history also changes. A downward revision to past population would imply higher per capita income. Should HLFS total hours worked also be revised downwards, then labour productivity could be higher. If higher productivity persist into the future then it may partially offset the dampening effects of slower population growth.

The implications of lower-than-expected net migration will become clearer as Stats NZ feeds these through into other key statistics. The Treasury will be closely monitoring future releases.