Statistics New Zealand updated the design of the Household Labour Force Survey (HLFS) in the June 2016 quarter to improve the relevance of the survey. Some of the key changes included a new questionnaire that increased the amount of information on employment conditions and more effectively identified those that are employed, particularly self-employed, and including in the survey coverage parts of the armed forces that were previously excluded.

The change in the survey created level shifts in some of the HLFS series, including key indicators such as the number of people employed and the total actual number of hours worked each week, which have made annual and historical comparisons challenging. Recently, Statistics New Zealand have published estimates of the size of these level shifts [1]. This Special Topic uses these estimates to re-estimate recent trends in employment growth, hours worked and labour productivity (GDP per hour worked).

To re-estimate the recent trends in the series in question, the central estimate of the level shift is used to calculate what the quarterly percentage change in the series would have been without the survey change (Table 1). This “adjusted” quarterly percentage change is then used to estimate the series’ in the March quarter 2016 and then the official quarterly percentage changes are used to back out previous quarters. This is done all the way back to 1986, although the results may not be accurate more than a few years back if changes in the structure of the labour market mean the level shift is not a fixed proportion over time. In our view however, the method is likely to provide a reasonable approximation over the past year or so when the structure and dynamics in the labour market are likely to have remained fairly stable. A greater source of uncertainty is the confidence interval around the level shift estimates.

* Main figure is the central estimate, figures in brackets are the range at the 95% confidence interval
Source: Statistics NZ, Treasury

The nature of the survey design change meant that most of the data variation was concentrated in the employment and labour force measures. The re-estimated unemployment rate is virtually identical to the published unemployment rate, with any differences close to zero on average and well within the margin of error [3]. The level shift does appear to have affected the employment and participation rates, which are approximately 1.3 and 0.7 percentage points higher respectively based on these calculations. Both the employment and participation rates are currently at or close to record highs even after “adjusting” for the level shift.

Total actual hours worked per week followed a similar pattern to the number of people employed, with annual growth around or above 6% through most of 2016. After adjusting for the level shift, annual growth was around 3.5% over the second half of 2016, easing to 1.2% by June 2017 (Figure 2). This appears to line up better with Quarterly Employment Survey (QES) total weekly paid hours annual growth of around 3.0-3.5% over the past year (although there is a material divergence by June 2017). 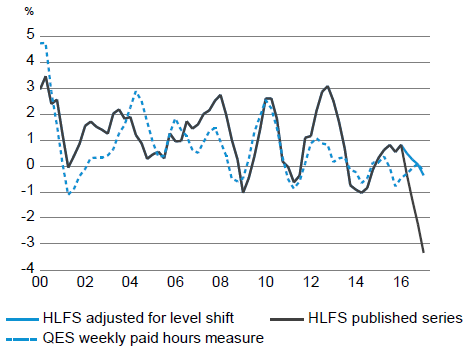 There were some relatively large changes to the HLFS last year that have an impact on some of the key economic indicators that the Treasury monitors (and show in the MEI Chart pack). The changes do not impact on economic growth itself but on its drivers: labour input and labour productivity. Now we have a few quarters of data under the new HLFS, Statistics New Zealand have been able to estimate the impact of the change. Their central estimates suggest that growth in labour input is lower (but still strong) and growth in labour productivity is less negative (but still weak) once the change in the HLFS survey is adjusted for. These changes will not be incorporated into the headline HLFS results given the wide range of uncertainty around the estimates (the old and new surveys were not run together), but are useful to help understand recent labour market developments.

Separate but less timely official productivity statistics are due to be published in March 2018. These statistics, which draw on different primary data sources (such as QES and the Linked Employer-Employee Data), will provide a better steer on productivity growth for the year to March 2017.