The Treasury’s initial assessment of the economic impacts of an Omicron outbreak is a transitory hit of between 1.5%-2% of GDP across the first quarter, reducing growth accordingly.

We assume a future outbreak will continue to be managed through the COVID Protection Framework (CPF), and economic activity will be additionally constrained by labour supply disruption from COVID-related illness or self-isolation requirements. Our analysis draws on international experience to date, which suggests a short and sharp period of disruption to activity, when the Omicron outbreak peaks. Following the peak, activity appears to rebound quickly suggesting a transitory hit. We assume the initial impact in the first quarter will be offset by a recovery over the remainder of the year.

International evidence suggests the Omicron wave has a short and sharp peak...

Case numbers have declined quickly in the UK, US and Australia over last two weeks. Following from record high cases numbers through early January this suggests that the Omicron wave has a short and sharp peak. In the UK, this decline is now slowing, as it nears what may be a post-peak steady state. In Australia, the experience has been similar with a very short, sharp peak in new cases. The reduction in case numbers has started to slow, with cases appearing to flatten out at about 50k cases per day, approximately half of the peak. Cases in the US continue to decline from their peak. While the peak is reached swiftly, it is still unclear what happens post-peak and cases could stabilise at a high level. 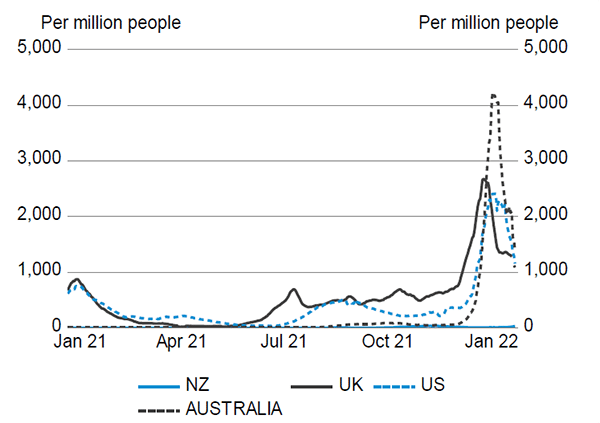 …while evidence continues to suggest Omicron infections are less severe. 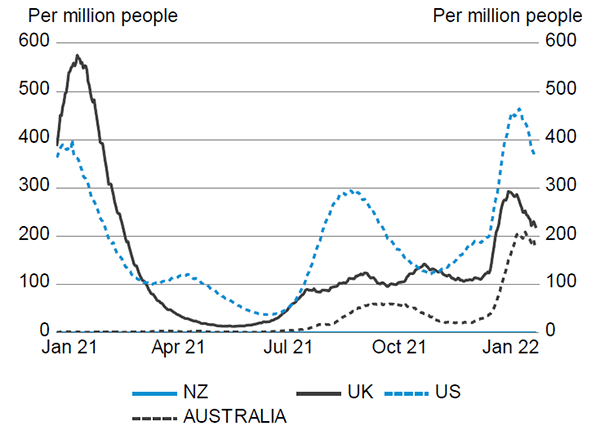 During 2021, most major economies saw a reduction in fatality rates as vaccinations were rolled out across populations. Despite the significant increases in case numbers and increased pressure on health systems during the Omicron wave, average daily fatalities remain below the previous pandemic highs. The US has seen the largest increase in fatalities during the Omicron outbreak, which may reflect its lower vaccination rates. While evidence suggests Omicron is milder than previous variants, its increased transmissibility continues to present significant health risk. Australia’s experience suggests that Omicron will produce a short period of severe disruption, at peak…

The Omicron outbreak peaked in Australia in early- to mid-January. With approximately 1 in 10 workers absent due to COVID-related illness and self-isolation requirements, and absences concentrated in certain industries, particularly transport, the peak in cases resulted in a period of severe supply disruption. Testing and isolation requirements on critical workers were eased in response. While supply chain disruption continues to persist, the reduction in cases and those isolating is alleviating some pressures.

Australia’s Omicron wave appears to have peaked, and while cases remain elevated, consumer confidence is improving. Initial spending data from Australia suggests consumer spending was affected in early January, during the peak of the outbreak. This was concentrated in hospitality and retail, though the fall was partially offset by a shift to online spending. The data also suggest broad growth over the past few weeks, as case numbers decline, and mobility data also suggests an increase in activity.

While data through January is highly volatile, due to seasonal swings, it suggests a broadly similar experience to the UK. This may suggest that consumers are quick to adjust living with widespread COVID-19. While New Zealand has not experienced a widespread outbreak previously, international experience suggest consumers will quickly adjust to a living-with-COVID framework.

...and the experience in the US has been similar...

Widespread absenteeism in the US is constraining output in factories, disrupting flight schedules and ports and closing stores. The impacts of Omicron are likely to be felt most in the already tight labour market. However, the impacts are expected to be temporary and will only stall the economic recovery, with the economy predicted to return to its trend in the near term. Analysts are expecting a hit to growth in Q1 followed by a rebound in Q2, with the forecast growth for the year remaining largely unchanged.

Initial employment data for January from ADP shows private payrolls fell by 301,000 in January, the most since April 2020. The data provides a mid-month snapshot and some of the decline reflects businesses temporarily closing amid staff shortages. If workers were not paid across the reference pay period (the height of the outbreak in the US), this will be reflected as a lost job in the survey. Therefore, the numbers highlight the potential impacts of Omicron on the labour market. With the Bureau of Labour Statistics due to release their January jobs report today, analysts are expecting the smallest jobs gain in a year, though forecasts range from a 400,000 decline to a 250,000 gain. These labour market impacts are expected to be a temporary, offset by a rebound in the coming months.

The Treasury has undertaken an initial assessment of the potential impacts of an Omicron outbreak on New Zealand.

We use and infection path similar to Australia’s, adjusting for New Zealand’s population to analyse the impact at peak transmission, and across the quarter. We make additional adjustments to reflect New Zealand’s more stringent current restrictions and relatively greater preparedness for an Omicron outbreak.

Given the uncertainty surrounding the potential spread, and corresponding policy responses, we have made several assumptions that impact our results. We work on the assumption that a potential Omicron outbreak is managed through the CPF. With the whole country at the red setting, economic activity will continue to be constrained by approximately $290m per week, in line with the assumptions detailed in December’s Half Year Economic and Fiscal Update. These impacts are concentrated in the arts and recreational services, food and beverage services and the accommodation sectors.

An Omicron outbreak poses and additional constrain on labour market and economic activity.

In addition to the CPF constraints, we anticipate that an Omicron outbreak will result in additional impacts in the labour market. Specifically, international experience points to a sharp decline in hours worked during the peak transmission phase, as people self-isolate due to infection or as close contacts. We estimate these additional labour market impacts purely in terms of a fall in hours worked.

We make several assumptions in our analysis...

We assume an isolation period of 10 days for positive cases, and 7 days for close contacts, in line with the Government’s Omicron plan for phase two and three, which will cover the vast bulk of the time when an outbreak is taking place. With an average NZ household size of 2.7 people, we assume that for every one positive case, there are 1.7 close contacts. In line with the proportion of the population employed, we can expect that 55.8% of cases and contacts are employed and that employed cases and contacts are in proportion to industry shares of employment.

We use HLFS data from Stats NZ to estimate the proportion of employees in each industry able to work from home. While some employees can work from home, some will be too unwell to work, some with milder symptoms will work reduced hours, while those asymptomatic/not infected will work their normal hours. Reflecting this, we assume a utilisation rate of 0.6 for those in isolation with the potential to work from home.

To calculate our economic impacts, we use a sensitivity of GDP to hours worked of 0.6. This assumption reflects historical data, while capturing changes in productivity and elasticity in the labour supply from unaffected workers, who increase their hours worked to offset absences from colleagues.

Our additional economic impacts are highlighted below:

Note: Our results are highly sensitive to our assumptions

...and our results are highly sensitive to our assumptions...

The estimated economic impacts will be higher if:

There is additional risk that a dramatic fall in labour supply at a high peak case volume produces additional supply chain disruption, which may constrain economic activity more broadly. During the peak of recent outbreaks in the UK, US and Australia, labour supply shortages caused severe disruption to the logistics industries causing congestion at ports and disrupting flight schedules. While this may produce a period of severe disruption, we anticipate the impacts on the economy to be transitory.

New Zealand has not experienced an outbreak of the scale that Omicron may produce, and therefore there is additional risk that consumer behaviour may change, leading to a fall in confidence and demand as we adjust to living with COVID-19. The New Zealand economy is entering the outbreak in a strong position, however, and has been resilient to previous outbreaks of the virus.

On balance, we expect an aggregate quarterly impact of an Omicron outbreak to be about 1.5%-2% of GDP.

Based on infection paths in comparative countries, and adjusting for New Zealand’s population, we anticipate a potential hit to hours worked across the quarter of 2%-2.5%. Including the ongoing CPF constraints, an aggregate impact on GDP of 1.5%-2% might be expected in the first quarter, compared to a scenario without the Omicron outbreak. We assume that this impact will be transitory, partially offset by stronger growth in the following quarters. We continue to assess the impacts of Omicron and update our analysis as more information comes to light.