Dairy production has flattened in recent years and future growth will be limited by emissions-reduction targets.

Dairy exports contributed $18.6 billion to the New Zealand economy in 2021, representing 5.3% of nominal GDP and 23% of total export values. From the mid-2000s to 2013 growth in dairy export volumes was a key driver of total goods exports growth, as the signing of the NZ-China Free Trade Agreement (FTA) opened up a significant market for dairy products. The increase in demand was met with an increased national herd, higher milk production and higher dairy export volumes (Figure 1). However, growth in milk production has slowed since 2015, with dairy cattle numbers declining as environmental regulations have been tightened.

Looking forward, milk production is expected to remain flat.  Consequently, continued growth in export revenue will need to be achieved by adding more value to the milk produced or through higher prices. 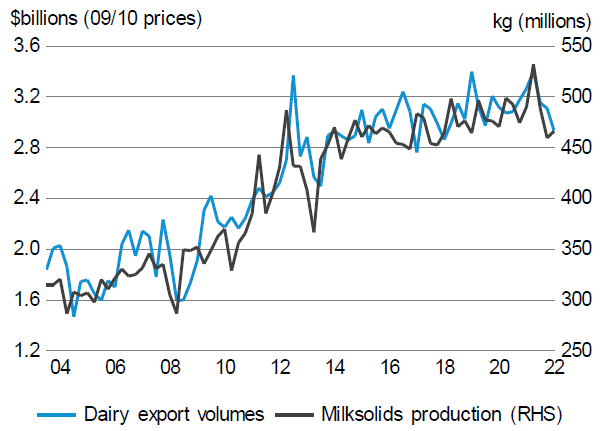 …but milk production is flattening…

Dairy production growth has slowed in recent years as tightening environmental regulations have significantly reduced the number of land conversions to dairy farming (Figure 2). Freshwater policies and the impending pricing of agricultural emissions have seen investment in production capacity decline, with a shift in focus to improving efficiency, with respect to both input use and greenhouse gas (GHG) emissions. 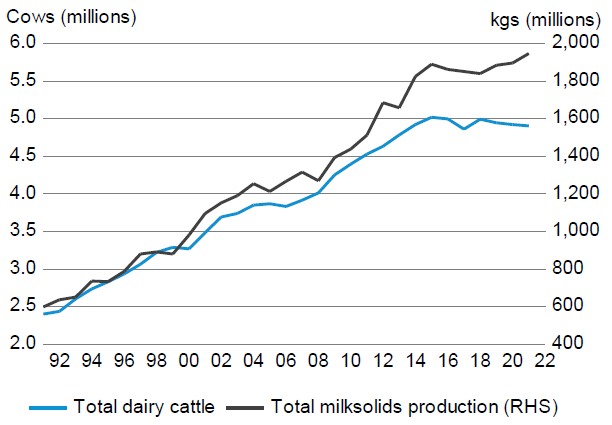 Agricultural GHG emissions are to be added to the Emissions Trading Scheme (ETS) from 2025, with an initial 95% free allocation, unless an alternative to the ETS is agreed. He Waka Eke Noa, a partnership between government, the primary sector and iwi, has recommended to the Government that emissions be priced at the farm level with separate prices for methane and longer-lived gases. Modelling by the group estimates that the pricing of emissions will reduce dairy production by between 0.7% and 1.4% by 2030, compared to 2017 levels. However, the group cautions that if emissions prices rise by more than assumed, or if regulations lead to a significant transition in land use away from dairy, the impact on production could be more significant.

While cattle numbers decline and land availability becomes constrained, productivity is expected to continue to increase. Trend productivity, measured as average milksolids per cow, is increasing by approximately 1.3% per year. Similarly, the trend average milk solids per effective hectare is increasing at a rate of about 1.5% (Figure 3). While productivity improvements are expected to continue in the coming years, there is likely to be a shift in focus from achieving greater output per unit of input towards achieving fewer emissions per unit of output. 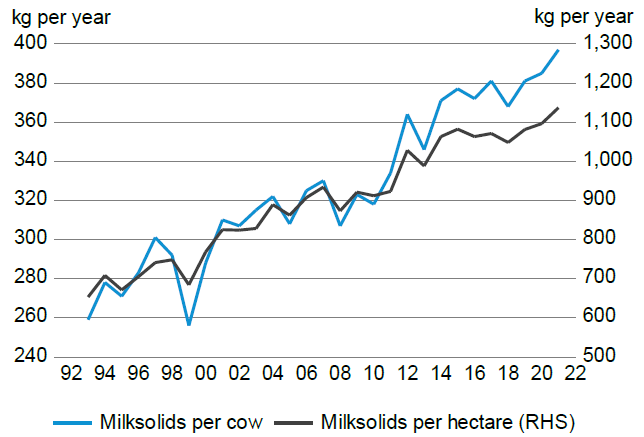 Aotearoa has an advantage in powders…

Whole milk powder made up 41% of total dairy revenue in the year to Poutū-te-rangi/March 2022. The dairy industry has signalled an intention to improve the value of products, with investment in new product development and ambitions to reduce the share of dairy that is exported as a bulk ingredient for further product manufacturing overseas. Aotearoa/New Zealand lacks the comparative advantage to onshore this product manufacturing, however, due to relatively higher capital and labour input costs compared to key markets in Asia.

The seasonality of Aotearoa/New Zealand’s pasture-based production and our distance from export markets lend themselves to the production of long-life milk powders. Due to the seasonality of production, average capacity utilisation in New Zealand’s dairy processing industry is considerably lower than other major exporters. Low plant capacity utilisation reduces the viability of some dairy product manufacturing, but powder manufacturing is suitable as it can better capture economies of scale. During the period of production expansion, investment in powder processing was necessary to process peak milk flows, but with production slowing, more capital will be available for investment in product-value transition. Significant changes in the product mix are however seen as unlikely, given New Zealand’s comparative advantage in the production of powders, although this does not preclude further growth in value-add.

…and a value transition can be achieved…

Continued reliance on milk powder production does not restrict opportunities for increasing the value-add of dairy exports, with new product development, improved efficiency of processing and increased sustainability key opportunities for improvement. There has been a substitution from on-farm investment to investment in dairy-product manufacturing following the slowdown in milk production growth (Figure 4). This suggests a shift away from the reliance on production expansion to drive growth and an increasing focus on value-add. 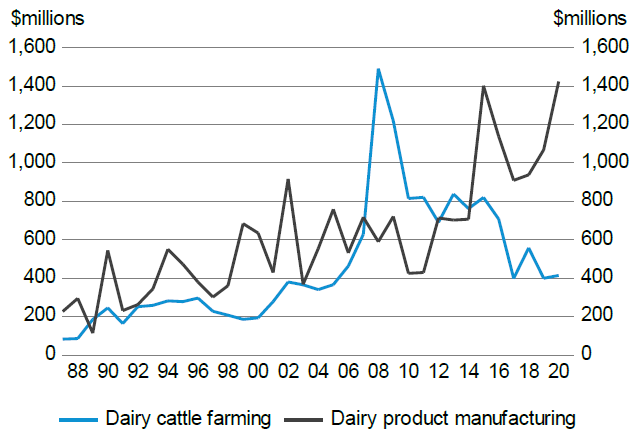 Sustainability investment and the resultant emissions reduction may see Aotearoa/New Zealand products command a price premium as consumers and firm preferences for ‘green’ products increase. This is, however, less likely to be the case in developing countries, where New Zealand’s exports are concentrated, as consumers are more price sensitive. Increasing the sustainability of manufacturing will also improve the future profitability of the sector as the price of carbon rises.

Global supply will be constrained…

Aotearoa/New Zealand, the US and EU together supply about two thirds of global dairy exports. The OECD-FAO Agricultural Outlook for the coming decade highlights that global export supply will be constrained moving forward, with production in major exporting countries growing at a slower pace. Cattle numbers are expected to remain flat in the US but decline in the EU, with production growth relying on increasing yields per cow. Growth in yields in the US and EU will outpace growth in NZ, owing to the greater prevalence of feed-based farming systems in those regions. New Zealand’s pasture-based farming system is more dependent on land availability, which will be constrained moving forward as environmental regulations tighten.

…and demand will continue to grow…

China has driven global demand for dairy imports over the past 15 years and far outweighs other markets. China’s domestic dairy industry is improving in its competitiveness to imported products, as consumer confidence in domestic products improves. As a result, while dairy consumption in China will continue to grow, growth in imports is expected to slow. Other emerging markets present opportunities, where land is heavily constrained and the capacity for domestic industry is limited. As income and population growth continue in these markets, the gap between domestic consumption and production will widen, increasing demand for imports.

In developed countries, where per-capita dairy consumption far exceeds developing countries, demand is expected to decline marginally as consumer preferences change. New Zealand’s dairy exports are concentrated in emerging markets and less exposed to changes in developed markets, although this may produce more competition from other exporters.

Overall, strong demand against constrained supply is likely to keep prices high (Figure 5). However, prices have already reached record levels in the wake of the Russian invasion of Ukraine. While a commodity price boom would generally be followed by a bust as supply responds, the outlook for a significant supply response is limited in the current environment. High prices currently present risks to demand, however, particularly from emerging markets where consumers are more price sensitive. Prices for most dairy products are therefore expected to remain supported around current levels but are unlikely to rise much further. 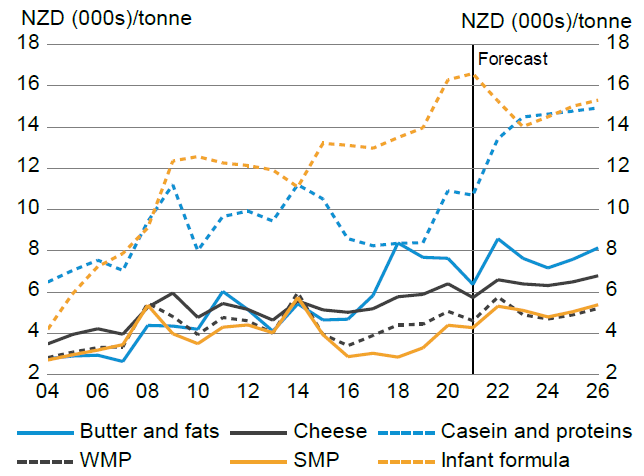 …but dairy export revenue growth will be weaker…

On balance, we expect that dairy export volume growth will slow in the medium term as production flattens, with reductions in cattle numbers offset by productivity growth. However, there is upside risk to this if the industry is effective in its ambitions to improve product value. The industry continues to invest in product improvements, although sustainability will absorb a significant proportion of investment. While we don’t expect significant changes in the product mix through a shift away from milk powders, there are opportunities for New Zealand’s relatively less emissions intensive production to command a higher price for its products.

…with implications for national income

Constrained global supply and increasing global demand are expected to keep prices high, supporting export revenue and the terms of trade. Despite the support of higher prices, dairy export revenue growth is expected to slow, weighing on Aotearoa/New Zealand’s trade balance and the current account. While dairy exports will remain a significant contributor to the economy, if weaker growth is not offset by gains from other exports, the trade balance will deteriorate. This will have implications for the current account and for growth in national income. Declining growth in national income would cause a depreciation in the exchange rate and have implications for domestic consumption. In the longer-term, imports would have to fall to stabilise the current account and Aotearoa/New Zealand’s external debt.