In part 1, I showed that the dividends from the three electricity companies had significantly increased around the time that 49% of their shares were sold to investors, and the companies were listed on the stock exchange. I’ll now look at some reasons why this might have happened.

Meridian Energy built five wind farms in New Zealand, starting with Te Apiti in 2004 and most recently with Mill Creek, completed in 2014. Mighty River Power built a number of geothermal power stations, with the most recent being Ngatamariki, commissioned in 2013. Genesis Energy installed Huntly Unit 5, a gas-fuelled generator that added to the existing generators at its Huntly Power station.

This involved significant investments of capital by the companies, with a single geothermal power station or wind farm costing up to $500 million to build. The cash the companies spent on these investments was not available for distribution to shareholders as dividends.

Growth in demand for electricity in New Zealand levelled off around 2008, meaning there was less of a need for new generation. So at around the time of the Government Share Offers (GSO) programme, the companies stopped building new wind farms or geothermal power stations.

Once a wind farm or geothermal power station is built, it starts generating electricity, which is then sold into the electricity market. This should increase a company’s earnings, and some of those earnings can be returned to shareholders via dividends. The significant investment by the companies in new generation should allow them to pay higher dividends now.

Mighty River Power and Meridian Energy also invested in other areas. Mighty River Power had an overseas geothermal development programme, in which it had invested $US 250 million. Meridian Energy had a number of business development ventures, including WhisperTech (which was involved in developing a domestic heating and power unit) and Right House (a home energy efficiency business). Again, the cash spent on these projects was not available for paying dividends.

Over the last few years, the companies have ceased many of these developments. Mighty River Power first paused and then exited from its overseas geothermal developments, and Meridian Energy sold or closed down many of its development ventures, including exiting from WhisperTech and Right House.

The graph below, from the Electricity Authority’s website, shows the two components of residential electricity prices, as measured by MBIE’s Quarterly Survey of Domestic Electricity Prices (QSDEP). The red line is transmission and distribution charges, which are regulated by the Commerce Commission. Consumers pay these charges to electricity retailers, but they are passed on to Transpower and local lines companies, with no impact on electricity retailer profits.

The blue line is the energy component of electricity prices, which does impact retailers’ profits. As the Electricity Authority said in its “2015 year in review”[1], “the chart shows that the competitive part of the market (the energy component) has contributed very little to real total price changes since March 2011”.

The Electricity Authority also commented that “over the past five years, prices have increased more slowly than retailer costs”.

This means the recent increase in dividends from the three electricity companies can’t have been caused by them increasing their prices.

Being a listed company

Listed companies have strong incentives to pay dividends to their shareholders. One of the reasons is that their shareholders have choices. If shareholders believe a company is not making the best use of its capital (e.g. returning cash to shareholders when the company doesn’t have a value-adding use for it) then they can sell and invest in another company that is.

The boards and management of listed companies will try to find the right balance between paying dividends now, and investing to increase dividends in the future. Companies that are 100% owned by the Government will try to do the same, but without the feedback from a diverse range of market investors and commentators and the signals sent by share prices, it is harder to get this right.

Management and boards of listed companies also typically own shares in their companies, or have their remuneration linked to the share price (e.g. through share options) and so their incentives are better aligned with those of shareholders. Without listed shares and a share price this is much harder for companies that are 100% owned by the Crown.

These incentives are part of the reason why Mighty River Power, Meridian Energy and Genesis Energy have increased their dividends as a result of now being listed companies.

Is there any evidence for this?

We can’t know what the companies would have done if they had been listed on the sharemarket earlier, or if they had remained in 100% Government ownership.

But we can compare them to other electricity companies which aren’t Government owned: Trustpower and Contact Energy. 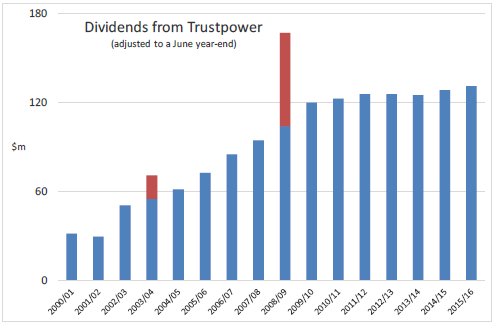 As you can see, Trustpower’s dividend history looks quite different to the histories of the three Government-owned companies that I showed in part 1. While Trustpower’s dividends have grown significantly, they been much more stable from year to year, and there has been no large increase in dividends in recent years.

The next graph shows the dividends paid by Contact Energy to its shareholders.

Contact Energy’s dividend history is a little more complicated. Firstly, as you can see, in 2014/15 Contact Energy paid a very large special dividend of 50 cents per share.

Secondly, from February 2009 until August 2012, Contact Energy implemented a Profit Distribution Plan (PDP). Under the PDP, all shareholders received distributions in the form of Contact Energy shares, but had the opportunity to have those shares, or a portion of them, bought back by Contact Energy for cash. This meant that shareholders had a choice between retaining bonus shares, receiving cash, or a combination of both.

The blue bars above show Contact Energy’s cash dividends (during the period when the PDP was active this is the value of the bonus shares bought back from shareholders). The green bars show the dividends paid in the form of bonus shares.

The PDP allowed Contact Energy to main the total value of its dividends to shareholders, while reducing the cash costs. I’ve changed the scale in the next graph to better show this:

Again, Contact Energy’s dividend history looks quite different to the histories of the three Government-owned companies.

To illustrate this, the next set of graphs show the relative dividends from the five companies, with 2012/13 (the year before Mighty River Power was listed) set as 100 for each of them. The large special dividend from Meridian Energy in 2010/11 has been excluded (again, on the basis that it related to Government reforms to the electricity market, and was directed by the Government). No other special dividends have been excluded. 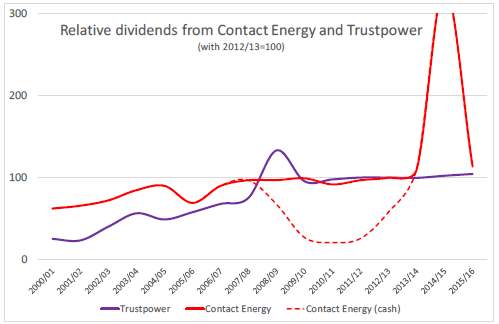 The solid red line is the total value of Contact Energy’s dividends; the dashed line shows the amount that was paid out in cash, which was lower during the period when Contact Energy’s PDP was active.

As you can see, setting aside the large one-off special dividend from Contact Energy in 2014/15, the dividend histories of the two companies are broadly similar.

Next, I’ll add the relative dividends from Genesis Energy:

This graph shows the clear step-change in dividends from Genesis Energy in 2013/14, which is not evident in the dividends from the two privately owned companies.

Finally, Meridian Energy and Trustpower (note the different vertical scale on this graph):

Like the three Government owned companies, Contact Energy and Trustpower also invested in building new generation. Contact Energy invested around $2 billion in total, most recently in building the Te Mihi geothermal power station north of Taupo, completed in mid-2014. Trustpower has built a number of windfarms in New Zealand and Australia, with its Snowtown Stage 2 wind farm completed in September 2014 at a cost of $A 424 million.

This isn’t conclusive, but it suggests that being a listed company (with the greater scrutiny and stronger incentives that comes with it) results in higher and more consistent dividends being paid to shareholders. And so it suggests the recent increase in dividends from Mighty River Power, Meridian Energy and Genesis Energy probably would not have happened to the same extent if the companies had remained in 100% Government ownership.