The Crown's Investment in Air New Zealand: part 1 of 3 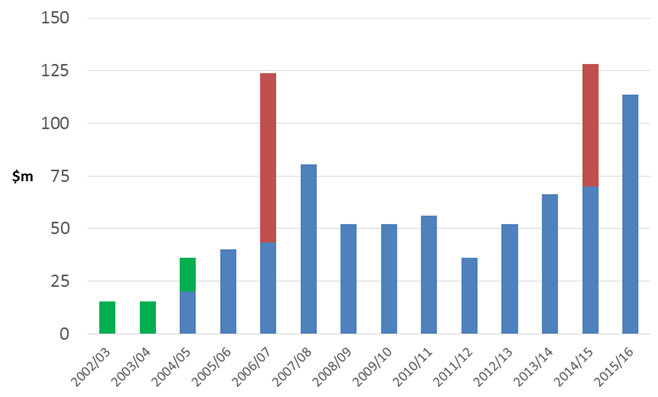 So what financial return has the Crown received for this investment?

Using an internal rate of return (IRR) calculation, I estimate that the Crown has received a return of 8.4% per year[1] from its shareholding in Air New Zealand, as at 9 May 2016.

Below, I explain how I arrived at that figure.

Two subsequent blog posts will look at some implications of this analysis:

An internal rate of return can be used to compare two or more investments to each other; it doesn't tell you whether an investment was "good". And "good" is not really a term that an investment advisor would use, as it is a value judgement.

You could argue that 8.4% is greater than the Crown's cost of borrowing over the period from 2002 to today, and on that basis the investment was "good". This would not be a sound argument, for a number of reasons - for example, it ignores risk.

A better benchmark than the cost of borrowing would be to consider market estimates of Air New Zealand's cost of equity. This is the return that market analysts think that shareholders in a company would need to receive, to compensate them for the risks of investing in that company. A few years ago, market estimates of the cost of equity for Air New Zealand were between 12% and 16%, somewhat higher than the calculated IRR.

But of course the Crown is not a market investor, and the Crown's motivations for investing in Air New Zealand were not purely financial. The Crown had other reasons for investing[2]. And the Crown did not invest on the expectation that it would sell the shares later and make a profit, as a private investor buying shares would.

Calculating the internal rate of return

To work out an internal rate of return on an investment, you need to know four things:

Since January 2002, the Crown has received around $869 million[3] in dividends from Air New Zealand. The dividends are shown in the graph below.

Chart 1: Dividends to the Crown from Air New Zealand

The blue bars are ordinary dividends, while the red bars show special dividends. The green bars are dividends paid on Air New Zealand's redeemable preference shares, which were issued to the Crown as part of its investment in Air New Zealand in 2002. They converted to ordinary shares in January 2005.

In November 2013, the Crown reduced its shareholding in Air New Zealand by selling around 221 million shares (reducing the Crown's shareholding in the company to around 53%) for which it received $365 million of cash.

The market value of the investment

The dates when this happened

Ignoring the time value of money, the Crown invested $1,042 million in Air New Zealand, has received $1,234 million of cash, and currently holds an investment in the company worth $1,341 million.

That might sound like a significant return, but it was over a fourteen year period. To put that into perspective, if you invested $1,000 in a bank term deposit that paid (say) 5% interest (after tax), and reinvested all of the interest payments, then after fourteen years you would have almost $2,000 in the bank.

The attached spreadsheet shows the details of the IRR calculation which, taking account of the time value of money, tells us the Crown's return on its investment in Air New Zealand was 8.4% a year.

Parts 2 and 3 of this Staff Insight article on the Crown's Investment in Air New Zealand will be published later this week.