Questions and answers: Review of the Reserve Bank Act - July 2020

What is the rationale for the Review and what does it cover?

Phase 2 is a wide ranging review of the Reserve Bank’s financial stability role and broader governance arrangements. The terms of reference for Phase 2 were released on 7 June 2018. Much has changed in the international financial environment and with financial system regulation since the Reserve Bank Act of New Zealand 1989 was passed. The scope for Phase 2 will enable the Review to ensure the Reserve Bank Act is fit for purpose and aligned with what the government considers will provide a strong, flexible, and enduring regulatory framework that enjoys broad public and industry support.

Everyone benefits from a sound and resilient financial system. The Review will ensure that the framework within which the banking sector is regulated and supervised enables the Reserve Bank to perform its role effectively. The Review also considers the legislative basis for managing and resolving bank distress.

Who is conducting the Review?

Splitting the legislation relating to the establishment and governance of the central bank from the legislation relating to prudential powers over deposit-takers is common internationally (e.g.  the UK and Australia do this) and should aid clarity.  It also aids the review process, since the Reserve Bank of New Zealand Bill can be introduced first, so the new governance arrangements for the Reserve Bank will be in place when it starts using the new prudential powers that will be enacted in the Deposit Takers Act.

The planned Deposit Takers Act will integrate the two different legislative frameworks for deposit taking institutions (banks and non-bank deposit takers) and establish the deposit insurance scheme.  This will be a flexible framework to allow for the regulation and supervision of different types of deposit takers in a way that is proportionate to the risks that deposit taking entities pose to the financial system.

In the period between the enactment of the Reserve Bank of New Zealand Bill and the Deposit Takers Act, the current regulatory framework for banks will continue under the 1989 Act, which will be renamed the Banking (Prudential Supervision) Act 1989.

What are the next steps in the Review? When will legislation be enacted?

The Reserve Bank of New Zealand Bill, which will implement the institutional reforms to the Reserve Bank, was introduced in July 2020. The Bill is expected to be referred for select committee consideration in late 2020 and, subject to progress through Parliament as projected, will be enacted in the second half of 2021. The reforms are expected to then come into force in mid-2022.

Prudential regulation and the design of the depositor insurance scheme are being consulted on in the third phase of consultation on the Review, known as C3, with consultation timeframes extended until 23 October 2020 because of the response to COVID-19. Final policy decisions are expected to be made in the first half of 2021, with the legislation to be introduced in late 2021. The subsequent legislative process will include several further opportunities for external input, as shown in the diagram below. 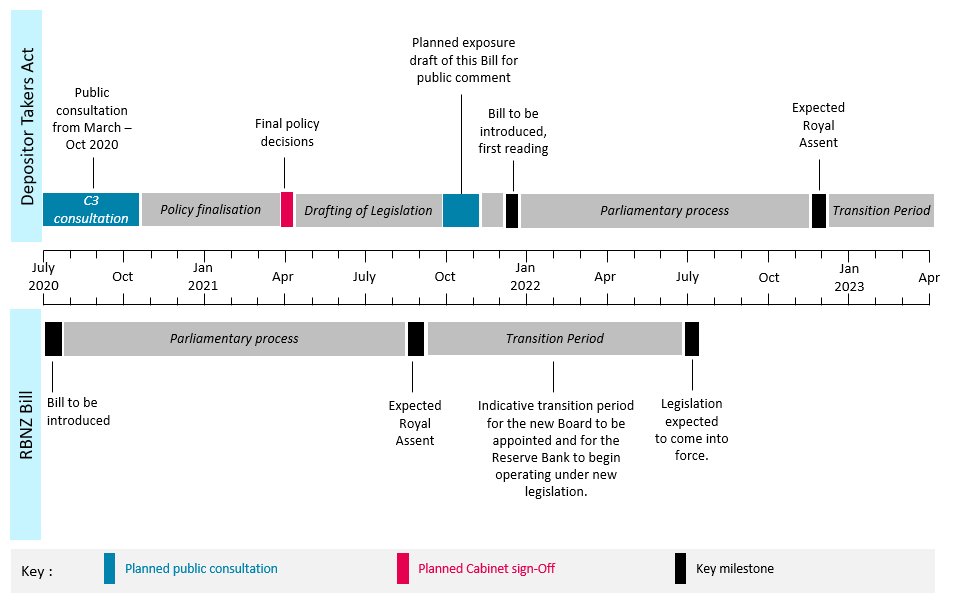 What decisions has Cabinet made in relation to the governance of the Reserve Bank?

The Government has now introduced the Reserve Bank of New Zealand Bill, which modernises the governance and accountability arrangements for the Reserve Bank. Key changes progressed in the Bill include:

We anticipate that the Bill will be referred for Select Committee consideration in late 2020.

There is more detail on this in the December 2019 Review Update and Q&A released at that time.

What decisions have been taken by Cabinet in relation to the Deposit Takers Act?

Cabinet also made additional in-principle decisions in regards to the regulation of deposit takers, in December, including the design of the deposit insurance scheme. These decisions include that:

There is more detail on this in the December 2019 Review Update and the Q&A released at that time.

When will the RBNZ Bill become law?

We are working on the basis that the legislation will be passed in the second half of 2021 and come into force in mid-2022. This will provide time for the new board to be appointed and for the Bank to transition to the new governance and accountability frameworks set out in the Bill.

When will the new Board be appointed?

Subject to progress through Parliament, the Bill will be passed and become an Act at Royal Assent in the second half of 2021. In that case, the new Act will then commence on 1 July 2022, at which point the new board will take on its governance responsibilities and the current board will be disestablished.

Work will start on the required composition of the new board after the election period, in order to allow the agreed appointments process to start in early 2021.

What will happen to the existing board?

Subject to the anticipated timeline being met, the new Act will commence on 1 July  2022, and at that time the current board will be disestablished.

Will there be another chance to comment on the RBNZ Bill?

The public will be able to comment further on the Bill during the select committee process.

What are the main features of the planned new Board?

As proposed in the Bill, the Board will have the following features:

How will board members be appointed and removed?

The Bill proposes the current process for the appointment of Board members by the Minister will continue to apply, with the processes to be reviewed after three years. In addition, the Minister will be required to consult with other political parties in Parliament prior to recommending the appointment of a Board member. Board members may only be removed from office by the Governor-General, on the advice of the Minister.  The grounds for removal will align with the concept of 'just cause' set out in the Crown Entities Act 2004.  This is a high bar, and will protect the independence of the Reserve Bank.

How will the Governor be appointed and removed?

The Minister will continue to appoint the Governor from candidates recommended by the Board.  The Board will be required to ensure that candidates for governor have the right skills and expertise for the role.

The Governor may only be removed from office by the Governor-General on the advice of the Minister, which may be on recommendation of the Board.  The grounds for removal will be set out in the legislation.

How will the Reserve Bank be monitored?

The responsibility for monitoring the Reserve Bank will be shifted to the Treasury, reflecting the shift from a monitoring board to a governance board, and aligning with normal Crown entity practice. This change, together with provision for broader oversight by the Office of the Ombudsman and the Auditor-General, will strengthen the monitoring of the Reserve Bank and provide greater assurance in relation to its ongoing performance.

Otherwise, the Bill carries over the changes made to the monetary policy framework in 2018 as part of Phase 1 of the Review of the Reserve Bank, including providing the Bank with a new employment objective and the creation of the Monetary Policy Committee.

What decisions have been taken by Cabinet in relation to the Deposit Takers Act?

Cabinet made additional in-principle decisions in regards to the regulation of deposit takers in December 2019, including the design of the deposit insurance scheme. These decisions include that:

There is more detail on this in the December 2019 Review Update and the Q&A released at that time.

What does the third consultation (C3) cover?

Why was the third round of consultation extended?

Considering the extraordinary challenges presented by COVID-19 to New Zealand’s financial system, the Government extended the third round of consultation for Phase 2 of the Review of the Reserve Bank of New Zealand Act 1989 by six months from the original deadline for submissions. The Government recognised that the attention of regulatory agencies, as well as industry and other stakeholders, was best focussed on addressing the immediate challenges created by COVID-19.

Submissions will now close on 23 October 2020. Final policy decisions are expected to be made in the first half of 2021, with the legislation to be introduced in late 2021.

How can I contribute?

As noted above, the final round of consultation on prudential matters and depositor protection has been extended until 23 October 2020.

All written feedback should be emailed to [email protected]. Alternatively, responses can be sent to the address below:

There will also be opportunities to review the Reserve Bank of New Zealand Bill at the select committee stage, which is expected to start in late 2020.

Will my correspondence be made public?

What information will be made available?

Background and supporting papers, including more detailed information on some of the topics being consulted on, are also available in addition to the main consultation documents.

In the spirit of conducting the Review in an open and transparent manner, the Review team intends to proactively release additional information relating to Phase 2. This information includes:

Further information about Phase 2 can be found at Reserve Bank Act Review.