The Role of APEC

APEC (Asia-Pacific Economic Cooperation) promotes closer economic relationships in the Asia-Pacific region to improve the business environment and raise the living standards of its members.

New Zealand is a founding member of APEC and is represented at a range of officials and Ministerial level meetings which culminate every year into the APEC Economic Leaders’ Meeting. 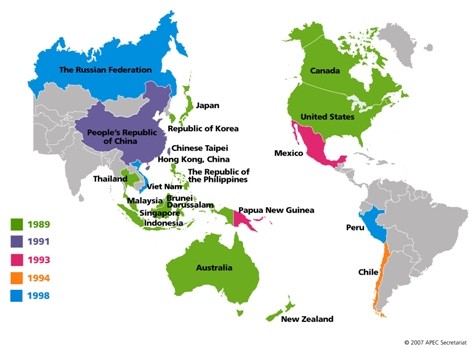 The APEC Economies Map is reproduced with the permission of the APEC Secretariat, Singapore. For more information, please visit http://www.apec.org/.

The Asia-Pacific region is a major force of global growth and is economically important to New Zealand. Many of our most important economic and trading partners are located on the Pacific Rim (most notably Australia, the United States, Japan, Korea and China).

The Treasury's Role in APEC

The Treasury represents New Zealand at the APEC Finance Ministers’ Process, the Economic Committee, the Investment Experts Group and the Strengthening Economic and Legal Infrastructure Coordinating Group. The Treasury works closely with the Ministry of Foreign Affairs, Ministry of Economic Development and other domestic agencies on APEC related activities.

There are a number of other international and regional organisations that the Treasury is engaged with in order to promote New Zealand’s regional and international connections, such as the World Bank, IMF, Asian Development Bank, OECD, and the East Asia Summit.

Contact for General Enquiries about the Treasury's Contribution to APEC